Timing a lunch in Macon when we’re leaving Atlanta is easy, but it’s a little more difficult scheduling to meet with our good friends in that city, Rex and Rachel, when we’re coming from Glynn County, since it is so far away. Also, we knew this time that we’d need to make at least one Baby Mercy Break, plus a detour to take pictures of that old chicken restaurant, and a four-mile stretch of I-16 had one lane closed for construction. But somehow, we timed it pretty well and met up with Rex at The Rookery, on 543 Cherry Street in downtown Macon right about when I thought we could. Rachel, who just started a terrific new job that has her glowing with happiness at how awesome it is, was a little behind, but the six of us took a table in this fantastic old building with a lot of history.

The current owner of The Rookery is a local named Chad Evans, whose family runs a small chain of barbecue joints, Georgia Bob’s, that we have not yet visited. In 2009, Evans bought the beloved old restaurant from Jim Kee, who opened it in 1976, during the waning days of the original Capricorn Records. For decades, it was a low-light, heavily-smoked dive bar with a reputation for excellent hamburgers. These days, smoking is banned, the lights are still low, and they occasionally have live music, usually Southern rockers keeping the Allmans / Marshall-Tucker vibe going. 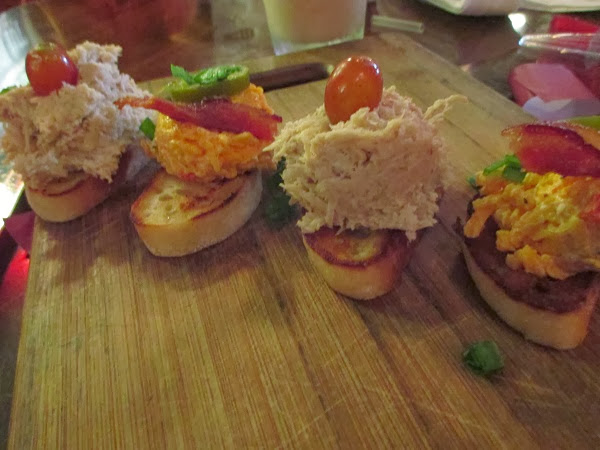 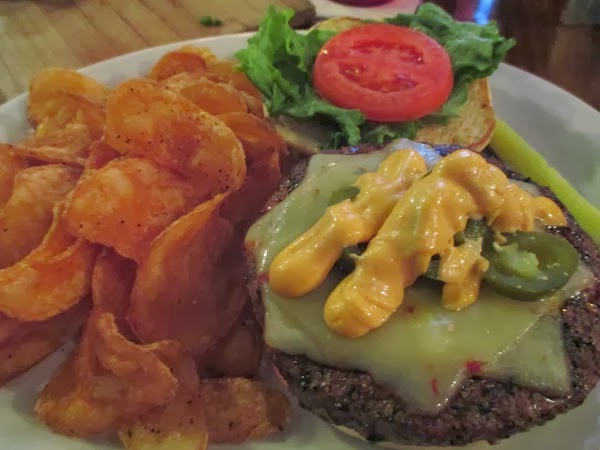 We started with a pair of Market Samplers. These are little bites of pimento cheese with bacon and chicken salad, two per order, that come on crostini bread. That’s a great way to get things started and get ready for the really awesome burgers.

Rex theorizes that Evans took some discreet influence from Atlanta’s Vortex when assembling the burger menu. I have no objection if that’s the case, because I really love The Vortex, and I really hate cigarette smoke. These are, indeed, completely amazing burgers. Just plain awesome. The shtick is that they’re all named after Georgian celebrities and musical acts. The Jimmy Carter, of course, has peanut butter on it.

I had a Jerry Reed, cooked medium rare, with pepperjack, jalapenos, and Sriracha mayonnaise. I can’t tell you how good it was. It was on the top ten list, absolutely. They have homemade chips here, which is great. I like those better than fries most times. There’s nothing like a good, juicy, spicy burger with crispy, fresh, not-greasy chips.

The other thing that The Rookery is known for is their milkshakes. They have a collection of silly and over-the-top flavors, along with some rotating specials. My daughter had an orange dreamsickle and Marie had a very fun little drink indeed. A Moon Pie shake – and this from my sweetheart who proclaims herself not Southern enough to use okra to dip pimento cheese – is vanilla ice cream with marshmallow, chocolate syrup and graham crackers, and it is wonderful. These make just terrific desserts, and even if you’re passing through Macon bound for one of the city’s two landmark chains, Fincher’s or Nu-Way, you should definitely plan to swing by The Rookery for a milkshake. They’re fantastic.

Our friends had to get back to their jobs and we were very keen to get home and unload our packed-to-the-gills little car. We’ve shared meals with Rex and Rachel four times now, and Macon has done us right every time. But the next chance we have to go through or visit Macon, it’s time to let them pick, and Rex has been singing the praises for a boarding house in Warner Robins for years now. Maybe later this year, we will get a chance to try that.

3 thoughts on “The Rookery, Macon GA”