I finished up my trip to Macon with yet another visit to a place that cooks their pork – in this instance called “chipped pork,” as you see around the Columbus / Phenix City area – in the sauce. I’d tried the barbecue at three places already that day and each restaurant’s offering had been a little less memorable than the one before it, so my heart sank a little when Leonard Joubert, owner of Joe-Bear’s and Sons, told me that I couldn’t get his chipped pork dry, but it turned out more than all right. This was the best meal of the day by some distance.

This restaurant is in a long stretch of bars-on-the-windows buildings on Napier Avenue. It’s just not the nicest part of Macon I’ve ever seen, to be diplomatic. Joubert opened four years ago and has a good crowd of boisterous and happy regulars who trade jibes with him and his family while sitting around a counter, and of people in the neighborhood who are stopping in for carry-out orders. This is very much a friends and family affair, but don’t take that to mean strangers aren’t welcome, just that they might not remember to turn the lights on over the tables until somebody wants to sit at one! 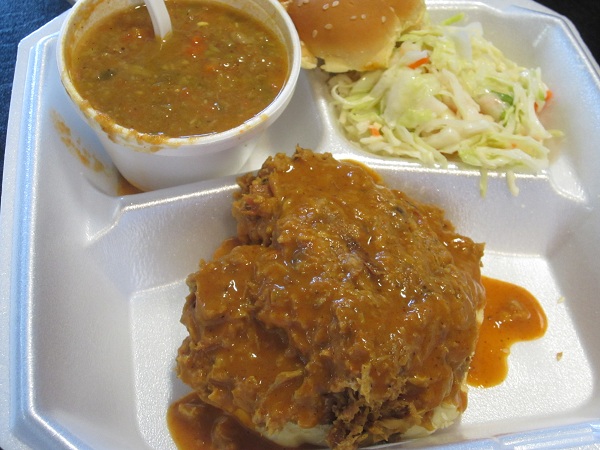 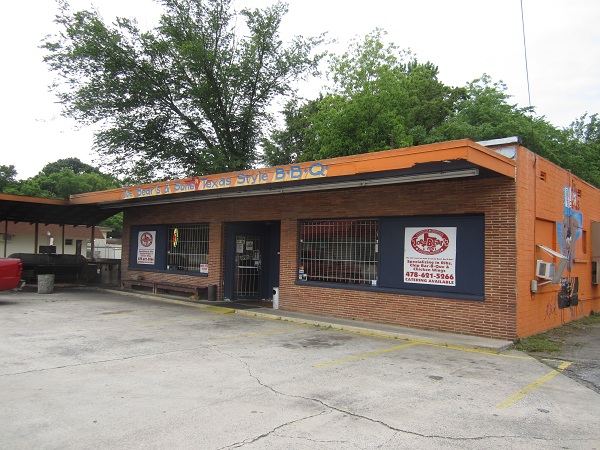 At this point in the day, I was on my own. Marie and the baby and I had spent the day driving around and eating and visiting before meeting her mother downtown. After a quick break for her to stretch her legs, we installed the toddler seat in her car and Marie drove it on home, leaving me free to go back down south twelve miles to photograph that awesome mini-golf you saw in the previous entry, and to grab one more meal before making my own way back. If the original location of Fincher’s was open in the evening, I would have gone there, but they close at an early and inconvenient hour, so I looked around Urbanspoon for more barbecue and found this place.

So I was telling you that my heart sank a little when I found that their pork was cooked in sauce. It sank a little deeper when I asked for the hotter of the two mustard-based sauces and, rather than giving it to me in a cup on the side, they proceeded to drown my meat in it. I learned to be a little bit more specific next time.

Man alive, it was good. The stew and the slaw were just okay, but this was the best barbecue that I’d had in at least the last ten places we’d visited. I know that there are plenty of people out there who just don’t like mustard sauce, but this mixed so well with the meat and it brought out so much flavor without overpowering it. But, that said, the ribs are even better. One of Joe-Bear’s titular Sons passed me one on my way out the door to sample. It was firm and juicy and I would not hesitate in the slightest in saying that was the best rib I have had anywhere in the state of Georgia. Full stop. I’m serious. You’ve got to go to Alabama or Tennessee to find a better rib.

“I ordered the wrong thing,” I sighed. I told him that the pork is really great, but the ribs, meaty, chewy and incredibly juicy, are even better, and that I know for next time. They also do brisket, goat, and turkey here. My curiosity is overwhelmed by the reality that I want more of those ribs. The stew and the slaw are just all right, but that’s okay; these ribs are amazing.

I was incredibly glad to have stopped here. I love it when I find a place that subverts my preconceived notions. They open at eleven every morning from Wednesday through Sunday and serve until they’re sold out. It’s not the most interstate-convenient place in Bibb County, but I would love to swing by for another visit the next time the road takes us that way. As much as we love finding new places, our constant quest may be put on hold the next time we’re in middle Georgia so that I can have a plate of these ribs.