For many, many years, I have told myself that one of these days, I was going to go visit Nashville and take US-41 to get there. Last weekend, Marie and I finally did this, taking the baby and the teenage girlchild along for a very, very long trek up to Nashville that let us see some amazing scenery and lovely places. I had it in mind to stop at every single barbecue joint along the way, expecting to find a few. In the end, we only saw three, all in the Nashville suburbs, thereby putting a crimp in my plan to scale the Urbanspoon Tennessee rankings. More about that in tomorrow’s chapter.

We planned to just stay one night in Nashville and then rush out of town for a trip to Huntsville and give my recent circumnavigation of Alabama a postscript as we moseyed home along US-72. Just about the whole trip was perfect, even if the main objective along US-41 was denied me.

Anybody who has traveled between Chattanooga and Nashville has seen the beautiful reservoir of Nickajack Lake. The view south of the interstate is breathtaking and unspoiled, but the view north shows off a fabulous old steel span bridge. I’ve always wanted to drive across that, but getting to Nashville as quickly as possible has always been the goal. That wasn’t the case this time. I was pleased to see that US-41 is the road that takes that bridge. So the plan was to take I-75 to Chattanooga, and I-24 to the other side of town, exit 174, and then follow 41 alongside the Tennessee River, cross that bridge and go to Jasper. From there, it’s a six mile hop down US-72 to the town of South Pittsburg. A roadfooding acquaintance of mine who writes the blog Davwud’s Food Court had written lovingly about a classic restaurant called Dixie Freeze before, and that looked like a great destination.

So we followed US-41, loving the view along the river, but then when we reached that beautiful bridge, we found the road closed for bridge repairs! We had no choice but to detour onto I-24. While I grumbled and Marie offered appropriate “there, there” encouragements, we just took the interstate to South Pittsburg and found the darn restaurant the unpretty way. 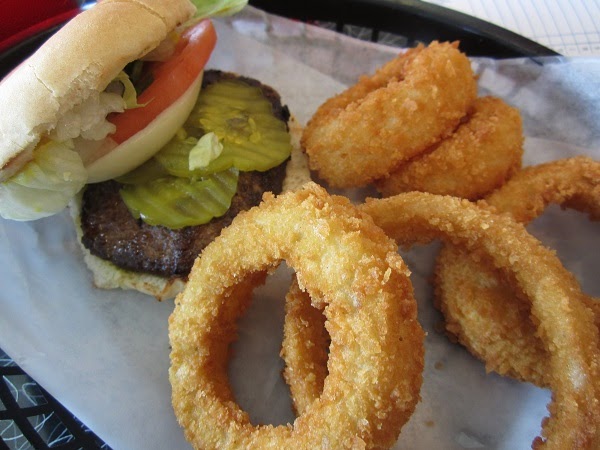 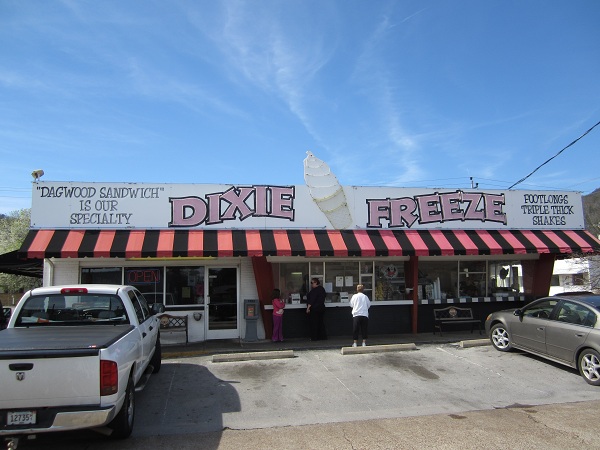 Marie and I have visited a handful of quite old restaurants that really fascinate me. Common to each are soft serve ice cream and hot dogs. They all date from the time before interstate fast food chains, the days before Dairy Queen started consolidating the many and varied old restaurants that bought their equipment but operated independently. Two of these places, Mrs. Story’s in Opelika and Bowen’s in Henegar, about which more next week, are called “dairy bars,” so this will be this blog’s formal name for the jiffy-dairy-spot-freeze places in question going forward, even though the only two places we’ve personally seen that specify this term in the restaurant’s name are in eastern Alabama. Google suggests that restaurants known as dairy bars are scattered throughout Connecticut, Virginia and the upper midwest as well. There’s a new label on the sidebar which guests may use to learn more about our experiences with them.

Dixie Freeze opened in 1948 as a walk-up window dairy bar, but it has evolved over time to become a very interesting mutant version of the concept. It does shakes, malts, sundaes and very good burgers, but where it really excels is with fresh home cooking. Certainly, guests can get a pretty good fast food-style hamburger here, but it’s the meat-and-three specials that elevate this into a gem.

Marie had the catfish along with some Brussels sprouts and was very pleased with them. I thought that I did well, or at least paid a little attention to the temptation of overindulging, only having about half a burger, a few onion rings and one of the best vanilla malts anybody has ever made, but Marie’s meal was certainly the best at the table. The catfish was just excellent, easily as good as, if not better, than restaurants that charge a lot more and build their reputation on it.

South Pittsburg is one of those many unfortunate communities that have seen their commercial center move out to the interstate, following and clustering around the Wal-Mart. Travelers on I-24 certainly are spoiled for choice among the national chains here, but just five minutes’ detour south gets drivers to this really fun old place, full of history and community, where a much, much better meal is assured. And if that isn’t enough reason to stop, you can spot the top of a gigantic and beautiful steel arch bridge spanning the river across TN-156. There’s always something new to see.