Our trip to Nashville did not go as planned.

Returning to US-41 in the town of Jasper, my idea was to drive at a leisurely pace and stop wherever the roadside lured us. In one instance, this worked out splendidly. We found the gorgeous Foster Falls near the town of Sequatchie, and a better distraction from a drive I can’t describe. We really enjoyed stretching our legs and spending a few minutes walking around there.

Early March isn’t the best time to see the countryside at its best, but this corner of Tennessee, below Monteagle, really is beautiful year-round. The climb down from Monteagle, I’m happy to say, is a very special treat. Rather than that gentle and straight tractor-trailer-friendly interstate descent north into the meadows , US-41 is about six miles of twists and turns and fun. I highly recommend it.

But what we didn’t find anywhere was barbecue. I admitted that I was having a problem with my addiction to using Urbanspoon to over-plan our trips, and so, for the drive north, I was just going to turn off the computer and not plan for anything. After leaving South Pittsburg, we’d just stop if we saw those three glorious letters, BBQ, and not be tied to a schedule like we so frequently are. Sadly, it was nearly a hundred miles before we saw those letters, and even then, the first of the three was different. We made it all the way to Smyrna, one of Nashville’s southern suburbs and one absolutely choked with used car lots and scrapyards, before we spotted CBQ on the left and turned around to try them. 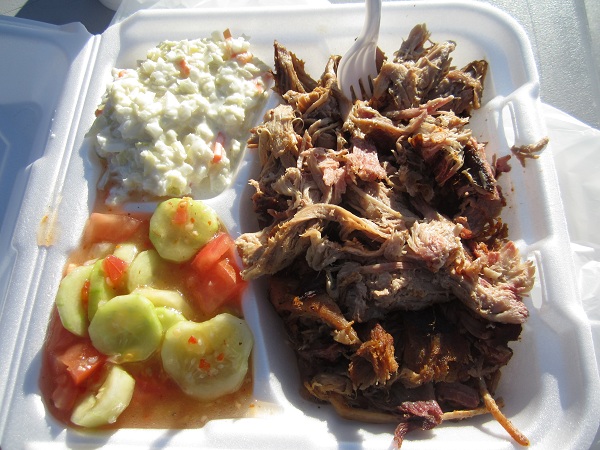 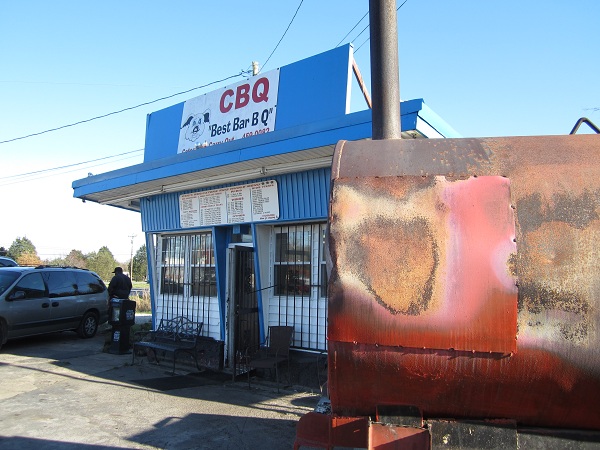 For many years, 1344 South Lowry Street, as US-41 is labeled in this part of the world, was home to Smokin’ Ed’s. There is very little useful information online about this place, although those brain-hurting aggregator sites like “Merchantcircle” still have records of it. From what I understand, Ed had locations in Smyrna and in Pigeon Forge before selling the business to somebody who consolidated under that name in Seiverville. I am also aware of quite a few rumors about Ed moving from town to town and starting businesses that don’t seem to last very long, but, wishing to avoid repeating potentially libelous comment, we’ll go that far and no farther.

Cary Wofford moved into Ed’s Smyrna location in 2007, trading under the name CBQ. It is primarily a take-out business, with two old picnic tables out front. The divided highway isn’t very traveler-friendly, particularly as the Nashville suburbs begin their Friday rush hour, but they seem to do some good business with carry-out orders and catering.

Marie and I each had pulled pork and thought it was really good. The pork is smoked over hickory for about twenty hours outside. Picnickers will be dining right next to the smoker, which is probably the best place in the world for it, as the aroma from the smoker is enough to overpower any exhaust odors coming from the cars speeding towards Murfreesboro.

The pork is very smoky, moist and tasty, but what really made this a great stop was the sauce. It’s available in mild, medium and hot varieties of a tomato-vinegar mix and even the mild has some lingering burn behind its sweetness. The writer Troy Downing, who visited last year, must have got the mild to find it not very spicy, but then again, he also got a shot of whiskey out of the deal. The medium sauce was too spicy for Marie and the hot just about did me in. I loved it completely.

It was such a nice little stop, and such a nice visit with Cary, that I didn’t really mind that I missed out on some barbecue that I’d hoped to find along the way. We saw a little more of interest as we got out of Smyrna and entered LaVergne, including the restaurants Lazy Pig and Smokers, but by this point, rush hour traffic and those great big buses and six thousand traffic lights had slowed our progress so badly that we couldn’t realistically stop at either and still get to the bookstore in Madison that we wanted to see before getting back to Inglewood at our appointed time. So we left LaVergne for another day, and looked forward to some supper.

It was, literally, an eight hour drive from Atlanta to Nashville. Just think: when musicians made this trip along US-41 before the interstates were built, it was like this all the time.

One thought on “CBQ, Smyrna TN”