A week ago, Marie and I took a little barbecue tour of northwest Georgia. We went out I-20 almost to the Alabama line, then drove north up GA-100, took a right at Cave Spring and sauntered over to Rome before returning home to Marietta via I-75. The trip took almost six hours and took us to four different restaurants. I wanted to sample this area for several reasons, but one of the big ones was this: nobody else seems to have done it. There are many excellent food and barbecue bloggers out there, but nobody has really covered this area. I greatly enjoyed a pretty comprehensive site called All About the Smoke (3/29/12: site down) which covers northeast Georgia, but there’s nothing like it for the other side of the state. Even the magnificent, and sadly still on hiatus 3rd Degree Berns has given this region a wide berth.

I don’t reckon that anybody will be accusing me of trying to goose my Urbanspoon stats with these four entries; as near as I can tell, absolutely nobody is talking about barbecue in Tallapoosa, Cedartown and Rome. We should do something about that.

In the previous entry, I told you about our first stop, in the border town of Tallapoosa. From there, we got turned around a little bit. Marie and I use Google Maps to navigate on our trips. This was the first, and, heaven willing, the last time that the service got so completely hornswaggled by the notion of getting a fellow from point A to B. After we had eaten at Turn Around, we asked our server whether there was a grocery store in town. Marie and I had each realized that a town this near the Alabama line might have its soda aisle served by Buffalo Rock. The server told us there was a Piggly Wiggly which turned out to be within walking distance, just 200 yards further along US-78. Next door was a Jack’s fast food place, first mentioned in this blog about a year ago and still, somehow, not given a proper visit.

So we bought some Buffalo Rock and Grapico from the store and resumed our Google Maps journey. This took us back about a mile in the direction we came, and then in a loop back towards I-20. About four miles later, we emerged at a traffic light on US-78, the Jack’s visible about 200 yards to our right. Google Maps, you failed us.

Anyway, we continued on, distracted briefly by a sign pointing out the site of historic Possum Snout, past some damage and felled trees from the region’s recent horrible storms, and Google Maps failed us again as we got into Cedartown. If I hadn’t spotted a sign for South Main Street nowhere near the point the directions told us to look for it, we’d have missed it completely. 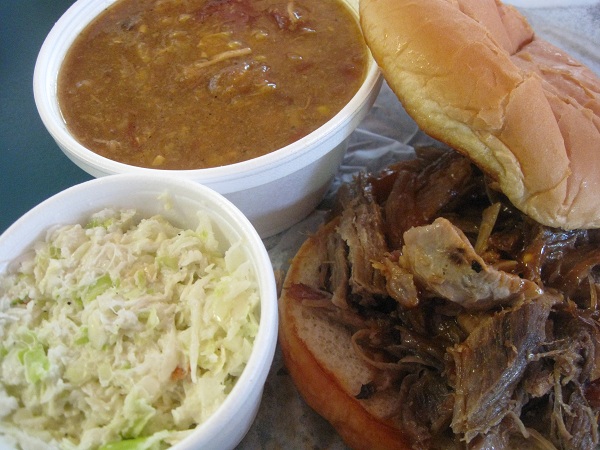 The first big surprise here is that the restaurant we were looking for is in the process of changing its name. Owens Barbecue, a family-owned business, was bought in March and is currently calling itself Lively’s Owens, although they have not yet changed the roadside sign. Owens was evidently here for thirty years in this small brown shack under gorgeous tree cover; Lively has been in charge for about two months and has introduced a few new menu items.

The pork here is not as finely chopped as many other places, and the portions seem a little smaller. I had a sandwich and stew again, and Marie just had a cup of slaw. While the restaurant’s “classic” sauce – traditional Georgia tomato-vinegar mix – is still available, the new owners are promoting their “Darbi-Q” recipe. This is a Carolina-styled sauce, thin and brown-orange. It is really good, though I’m not sure whether the menu needs to feature a “Darbi-Q” as a separate sandwich, when it’s evidently just their standard pork sandwich, drenched in sauce.

The stew didn’t hold a candle to the recipe that we tried about an hour earlier in Tallapoosa, but it was also memorable and I really liked it. This stew was in a thinner soup, with larger chunks of meat, and it was very peppery. I really like trying places like this that have their own take on a dish.

We were eating at the same time as a small group from the nearby National Guard base, and passed the time talking with them about, of all things, the Winchester House, and the recent preoccupation among religious scam artists about the end times. According to one billboard near our house in Marietta, the world’s meant to end today. Well, if it does, thanks so much for reading, and if it doesn’t, stop by on Monday and we’ll tell you about the next two places on our tour.