Two Saturdays ago, Marie and I were enjoying a little tour of northwest Georgia that took us to four barbecue restaurants. The original plan, drafted before our baby was born, had been to continue north up GA-100 to the town of Coosa, see whether anything interesting might have been waiting for us there, and then drive east to Rome before coming home.

Unfortunately, we did have a little time budget to worry about, as we did need to get back and relieve Marie’s mother of babysitting duties. So when we got to the town of Cave Spring, we changed plans and drove to Rome from there. Coosa would have to wait for some other time. My parents and I used to drive through there all the time. They grew up in Fort Payne, Alabama, and we would go back out this way to visit my grandparents every four or five weeks.

Marie doesn’t believe that she’s ever been through Rome. I hadn’t been by in around five years. The town used to be home to a very, very minor league indoor football team called the Renegades, and I was curious enough to come check them out back when I cared a bit more about that sport. I had supper on that trip at a barbecue place whose name I could not remember, but I looked over the listings at Urbanspoon, shrugged, thought that it might have been Troy’s, and got directions. I was incorrect. I’d never been to Troy’s before, although many, many people have in the eighty years the restaurant has been in business. 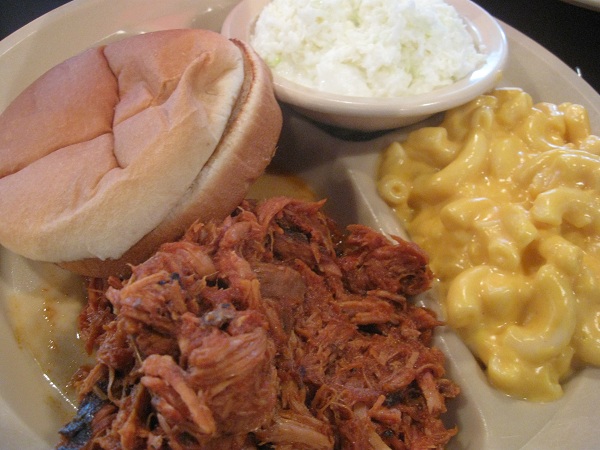 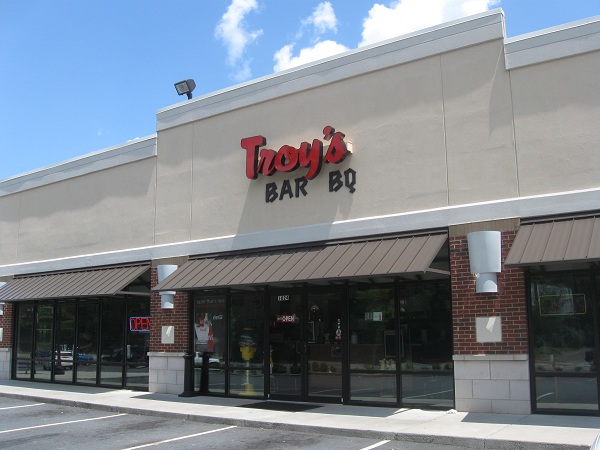 Troy’s, today, is in a large, open space in a small strip mall that also houses a Ru San’s. It is a characterless, commercial site that the present owners have attempted to spruce up with photographs and signage from the restaurant’s heyday. Apparently first opened in the 1930s, Troy’s was in a large building that was later demolished for a bypass. In the 1950s, they relocated to the place that generations of Romans knew very well. Troy – I’m not sure whether that was his first or his family name – passed away a few years ago, and the new owners bought the rights to it from his heirs. They have mostly kept the classic layout of the restaurant in its fondly-remembered space, with a three-sided counter right in front of things, but the much larger space in this strip mall means that they can accommodate several more tables on either side of it.

The pulled pork here is served in a deep, red tomato-based sauce. I asked, and it is prepared that way in the kitchen; you can’t get the sauce on the side. On any other day (these days), I might have minded a little, but since the sandwiches that I enjoyed at the previous two stops each had such very different takes on meat, I appreciated getting a third style in one afternoon.

Nothing here blew us away, though I did like the slaw and Marie was taken with her butter beans. It’s pretty good stuff, served with a great, positive attitude from a terrific staff, but I think that I would like it better if it was in a different location, and not one that feels like it was built yesterday. Recipes with this much history deserve a better presentation. 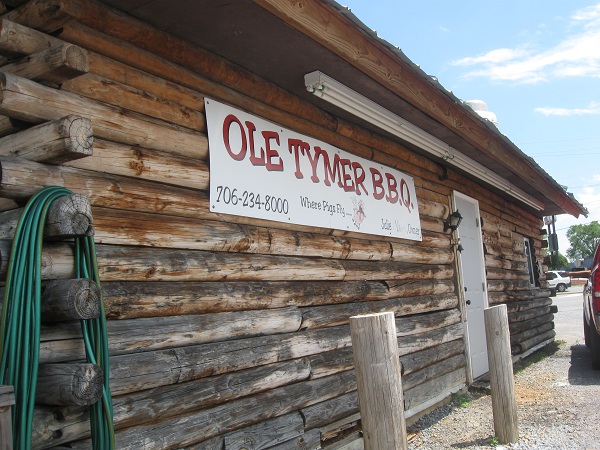 I was mentioning above that the last time I came to Rome, I ate at a place whose name I could not remember. By chance, our drive to Troy’s took us right past that place! It’s a drive-through shack called Ole Tymer, and while it doesn’t have Troy’s long history, it’s closing in on thirty years in business.

By this point, Marie and I were completely full, but I pulled into Ole Tymer anyway and got a bag of food to take home and reheat. I remember enjoying the meal that I had here five years back, and the chopped pork and stew didn’t disappoint. Then, I sat at one of their concrete picnic tables and read several chapters of Marvel’s Essential Luke Cage and just enjoyed the heck out of my nice late afternoon. But on this Saturday, I took my food home and had them with our odds-n-sods supper of leftovers and freezer pizza. I daresay I had the best meal. The chopped pork was smokey but also moist, and the stew was very good.

Ole Tymer kind of needs to invest in a new sign. It looks like there’s been a change in ownership, or at least half-ownership, sometime in the last few years, but the name of the second owner is still somewhat visible on the sign, his name faded but present. Every restaurant has a story; it looks to passers-by that the story of this one is tinged with sadness.

That wrapped up our first northwest Georgia tour. There are still several places along and nearby the I-75 corridor that we can try on another loop sometime, or on a similar jaunt into Alabama along I-59. It probably shouldn’t surprise you to learn that I’ve already sketched out another little day trip. Maybe we’ll get the chance to try it in a couple of months!