Many years back, Marie and I had a good pal, Dave Prosser, who moved from Athens to Anniston, Alabama. He’s since moved farther afield, to Idaho, dug up dinosaur bones, got lost on a mountain for three days, got married, and has only come back to town once. But while he was living in Anniston, I took the kids to visit one time. This would have been 2002 or so. I realized that US-78 connected Anniston with Atlanta, and decided to take that back home instead of I-20. Crossing back into Georgia brings you to the small town of Tallapoosa, and I stopped at the Turn Around Bar-B-Que for a take-out barbecue sandwich and fries and munched on those in the car for supper.

These days, Turn Around is no longer open for supper. They’re a breakfast and lunch place only, and they don’t do a roaring trade in lunch, either. That’s just not right; this Brunswick stew is completely remarkable, and if you are reading our blog and like barbecue, you need to plan to get out here and try this stuff. 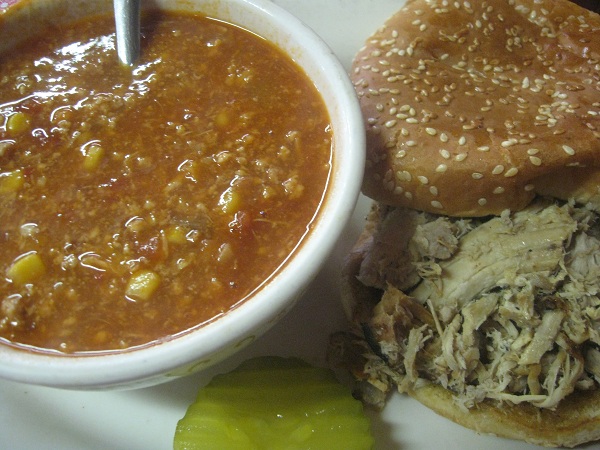 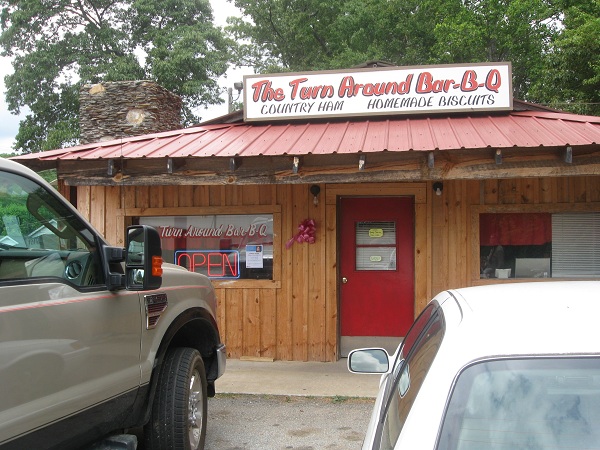 This past Saturday, Marie and I got out for her first baby break for a drive through northwest Georgia and a barbecue tour that I had planned a couple of months ago. Our baby came two weeks early; he was due on the 18th but came on the 3rd. We had originally planned to get out and do this tour on the 7th, but we used that day to treat her to some hot dogs around Atlanta instead. Marie’s mother was in town visiting and providing some much-needed help, and she watched the baby for about six hours while Marie and I stretched our road-tripping legs.

Tallapoosa is about one hour from our place in Marietta, and we got to Turn Around at 11.30. The sign out front is faded and, incorrectly, still notes their old dinner hours. Inside, the walls are peppered with grouchy, silly but nevertheless unwelcoming signs about following the house rules. Fortunately, our server was polite and agreeable, and utterly unlike the signs! Marie and I each ordered a chopped pork sandwich, and I had stew and she had potato salad. The pork is incredibly smoky and really, really dry. It’s served on a buttered sesame seed bun, but it really needs some sauce. There’s just the one here, a medium-thick red sauce of tomato and vinegar.

The pork is pretty good; I’ve certainly had worse. But this stew… well, I’ve certainly had many, many worse helpings of stew than this. It is simply remarkable, right up there with Harold’s and Speedi-Pig. It’s just not right that nobody seems to know about this stew. Seriously, if you’re on I-20 between Birmingham and Alabama, you should really swing by this place and see what I am talking about. It doesn’t appear to be anything special, just the standard ingredients of (I believe) ground pork, chicken, tomatoes and corn, but it is seasoned just perfectly.

Turn Around has recently started selling ice cream and brags about their banana splits; that’s a pretty good idea to try and draw the after-lunch crowds in and I hope that it works. This isn’t an area that I get too very frequently, and I kind of want them to still be around, serving this stew, the next time that I am.

Marie and I passed on dessert as we had several more stops to make. More about those in the next chapter…

4 thoughts on “The Turn Around Bar-B-Q, Tallapoosa GA”