About a week and a half ago, I got so aggravated with this girl that I used to date that I have to tell you about it. Now, you might think that “girls that Grant used to date” would not necessarily be on top of the list of people whom I would want to stop and visit with my newborn baby on the way home from the hospital, and normally, you would be right. However, I’ve stayed friendly with Jennifer for years, even if we are not as close as we once were, and she’s known Marie since before Marie and I began dating. Jennifer manages a comic book store in Woodstock, which is not at all bad as far as Diamond catalog stores go. It is downright terrific for anybody interested in buying modern comic books and superhero tchotchkes, although sadly lacking in boxes full of embarrassing dot matrix Star Trek fanzines, untranslated Brazilian James Bond comics, indefineable weird Japanese things and stacks of 1960s British newspaper comics, and there’s not a single 1970s National Lampoon with since-unreprinted Gahan Wilson pages in the joint. That’s why I never visit. Screw Iron Man, I’m into the good stuff.

Well, since I wanted to show off the baby, and since Jennifer’s store was on the way home, and since Jennifer’s more than midway through her own pregnancy, I suggested to Marie that we swing by and see whether she was in. Marie, sleepy but still glowing, agreed that we should, and so we stopped by for a few minutes to say hello and brag about our youngun. Jennifer invited us to come by the next day for Free Comic Book Day, we waved goodbye, pulled back out onto Towne Lake Parkway, and I did a complete double-take because I thought I saw something quite unexpected. After we got the baby back home and settled, I went online and confirmed it. Yes, the Hardee’s people have opened a Red Burrito in Woodstock.

Red Burrito is the fast-food Mexican chain run by CKE, which is the parent corporation of Carl’s Jr. They bought Hardee’s in 1997 and seemed to shut down about a third of them, which was just about the closest thing to a mercy killing I’ve ever seen in the restaurant business. This is actually a point I’ve been meaning to come back to for ages; remind me to tell you about Chicken Express one day. Anyway, noticing the success of their rival Yum! Brands and their dual-branded Taco Bell / KFC / Long John Silver / A&W stores, CKE decided to make similar restaurants with double menus. On the far side of the Rockies, there are Carl’s Jr. stores dual-branded with Green Burrito, and on this side, there are Hardee’s dual-branded with Red Burrito. These have steadfastedly avoided the Atlanta area until about a month ago. The first two Red Burritos have finally opened in Lithia Springs and in Woodstock. There’s another one up the road outside of Rome.

So the next evening, the older children and I went back to the comic store for my son to get a free Sonic the Hedgehog book, and for me to express my aggravation. I could not believe that, knowing how I feel about small-market regional fast food, she would work one parking lot’s distance from this place and not tell me that it had opened. Jennifer, kindly, explained that she remembered well how I feel about regional, small market sodas, but had no idea that I cared about regional fast food chains. I suspect that she was drawing a polite veil of no-longer-caring-in-the-slightest about how, for years, I have gone on about White Castle and Whataburger and Jack in the Box.

Oh, all right, so I wasn’t really aggravated, but I get so few opportunities to aggravate other people by showing up at their place of business and yammering on about fast food chains when they’re exhausted and tired of working a big promotional day with hundreds of extra visitors these days. How could I resist? 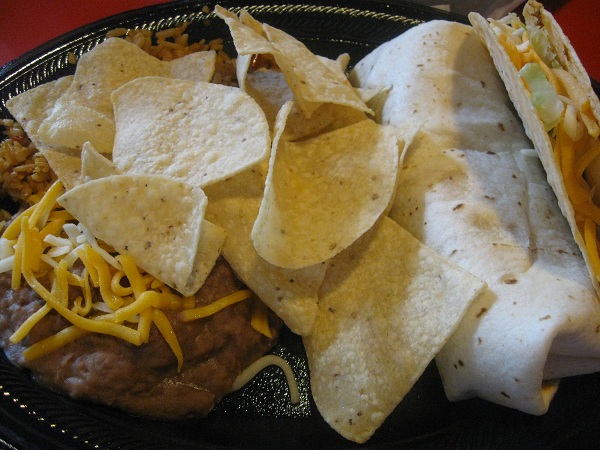 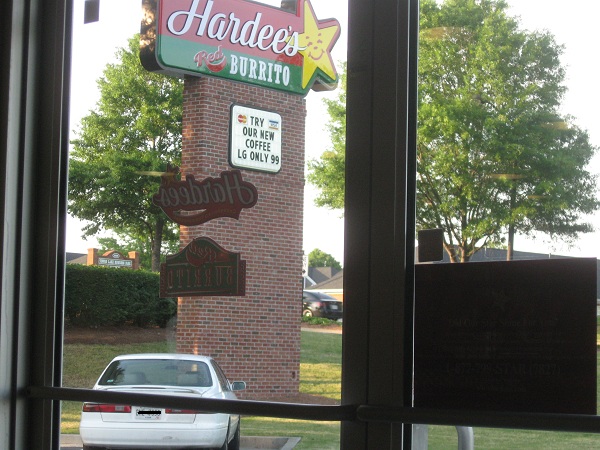 So, aggravation duly caused, the children and I went up to finally try a Red Burrito. I first heard of them ages ago when, curious about some point or other, I looked up Hardee’s on Wikipedia and saw the reference. I’ve since seen a billboard for one on I-95 in northern Florida, and we drove past one in Asheville when we were last there, but my curiosity over a fast food taco wasn’t enough to pull me from our schedule in one of America’s best food cities.

And the result was, well, about what you’d expect. The burrito itself – I ordered chicken – was not bad, although the thin, light green sauce that the poor kids behind the counter claimed was guacamole was pretty laughable. The chips, rice and beans were salty and perfectly acceptable for this sort of food. It’s better than Taco Bell, whatever that’s worth. It’s multiple orders of magnitude better than that godawful Taco Bell in Canton.

However, these tacos here are just absolutely pathetic. I’ve never seen something so sad. They just drizzled a few crumbs of ground beef into the bottom of a shell, added six or seven shreds of lettuce and a baby’s handful of cheese and served it up with, literally, two fingers’ width of space remaining between the cheese and the top of the shell. I ordered two tacos and I very much doubt that I got as much filling as I would have in just one from Taco Bell. Now, whomever is in charge of quality control here needs to step in and do something about this. They hired a simply terrific high schooler to take our order, but whomever is in the back actually making the food needs to go build ships in bottles if he’s that obsessed with very small things.

My curiosity has been sated. The food here is pretty good. “Better than Taco Bell” isn’t much of a recommendation, especially when it’s still not even close to being on par with Del Taco. Still, it’s nice to enjoy something new, isn’t it?