A couple of weeks ago, Marie and I loaded up the children and braved the Spring Break traffic for a weekend visiting her parents on Saint Simons Island. It wasn’t to be a very big trip, and we had to rush to fight our way through gridlock and lengthy baby-changing business – and boy, did this kid ever let us know that we needed to get to Cochran and change him – in the hopes of getting to the island at a reasonable hour. In the end, the trip, normally five-hours-and-a-bit if you do it direct, took nearer to seven thanks to all the backup between Atlanta and Hampton.

We settled on two of the possibly four barbecue joints along US-23/US-341, the old Golden Isles Parkway, planning to come back the faster, uglier way via I-16. The first place that we stopped was one that I’ve wanted to try for a little while, since reading an encouraging review over at Buster Evans’ blog. Sadly, Buster’s lost a good deal of steam in his blogging and does not update often these days, but he does offer a really nice, broad overview of Georgia barbecue via a fair number of short chapters. I’d recommend checking him out.

Scott’s is a family favorite, and that’s true for a lot of families. If this supper was any indication, this place is always packed on Friday nights. The restaurant was opened by James “Scott” Mullis in 1952, and passed down to his nephew, Roy, in 1973. In 1999, Roy’s daughter Tracee Kitchens and her husband Doug took the reins, and they’re definitely doing something right, if this mob is any indication.

They’re also doing something very pleasantly peculiar. How many barbecue restaurants have we featured at this blog? I count 135. At least half of those serve stew of some kind, often termed “Brunswick stew,” so I have seen a lot of recipes and many variants. But I have never, ever seen it made with thin spaghetti noodles and green peas before. 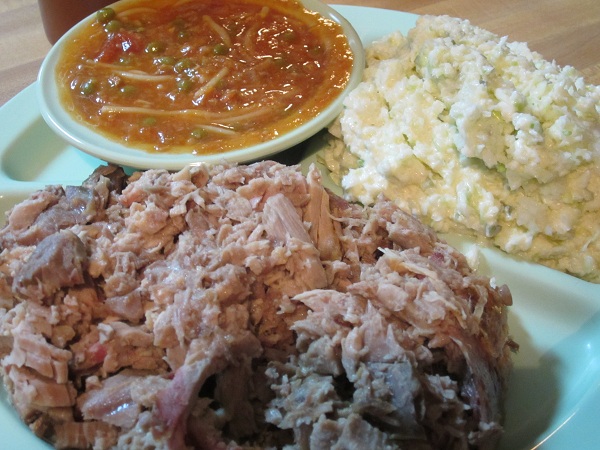 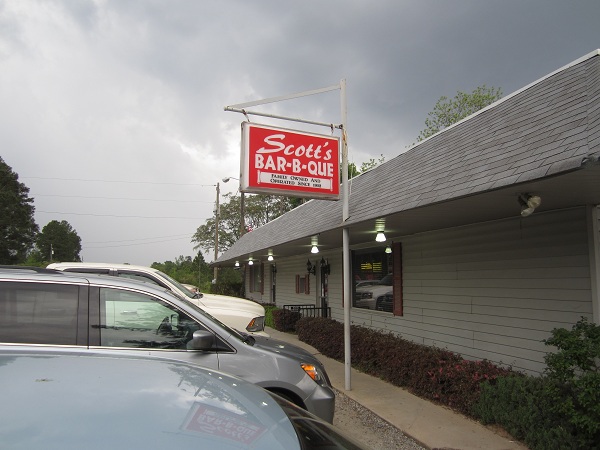 Well, I don’t wish to knock an Evans family favorite, but this honestly didn’t do much better than “okay” with me. The stew was incredibly interesting, and the service attentive and speedy, but I was not really wowed by the meat. Marie liked it more than I did, finding it appropriately smoky and interesting. Maybe I was just distracted by the spaghetti in the stew. How darn neat was that?

Scott’s has two sauces, which they term “thick” and “thin.” The thick sauce, served in a bowl with a spoon, is a dark brown sweet sauce, and the thin sauce, served in a squeeze bottle, is a vinegar-tomato concoction. Perhaps surprisingly, knowing my likes, I preferred the sweeter sauce. It really went better with the meat than the thin. It’s a rare day when Marie and I agree on barbecue sauce.

One reason that the visit was so long was that the crowd was so large that they’d run out of highchairs with functional straps. This has actually turned into as big a bugbear for us as restaurants without space to change babies. We had to take turns manning, and attempting to feed, a squirming and restless eleven month-old while waiting for another family to finish their meal, as the only highchair left for us didn’t have straps. By the time we finished, the crowd had thinned considerably, and we continued south, through Eastman, towards Hazelhurst and the small town of Lumber City. We stopped for gas – another very long layover, with about a dozen people ahead of me in line buying Mega Millions tickets – and then revisited Stinson’s, a barbecue place that we first tried about a year before we started blogging. 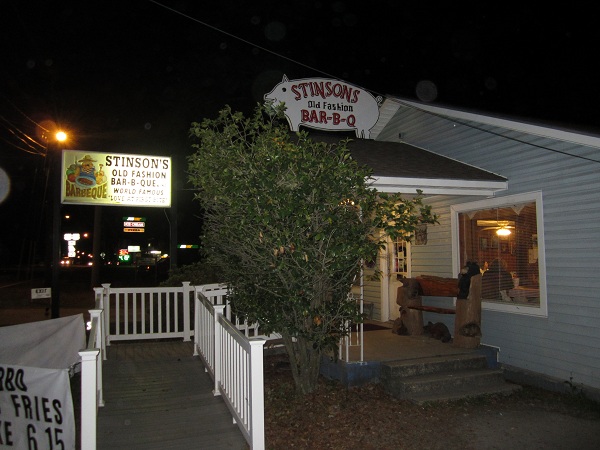 This is still a family-owned place, and these days the Stinsons spend a little bit of their counter and wall space promoting their youngest son Lance, an aspiring country music singer. The restaurant opened in 1981 and, like Scott’s, is an extremely popular Friday evening destination. If I was being a little more sensitive to the desire to get the heck on with the travel and get the baby to his grandmother, I might have said we’d try another time, because, an hour before they were scheduled to close, they were backed up like crazy in the kitchen. This is one of the reasons that Marie and I always stipulate that we don’t write restaurant reviews in the traditional sense. I know perfectly well that we hit Stinson’s at a terrible time when the opportunity came to tell you about them, but we also know perfectly well that they are capable of very good work under better circumstances. On a lazy afternoon, this is a fine place to stop in for what’s probably the best barbecue for twenty-odd miles in any direction. On a Friday night, it’s a catastrophe. The only plus was getting the order to go, so that Marie could take the wheel and I could refamiliarise myself with the splendid taste of their meat – it’s smoked over oak and pecan – while she drove.

I just had a sandwich and a bowl of stew and enjoyed them both – a little more than Scott’s, actually – while we drove through the darkness. Just as you leave Stinson’s, going south on US-341, there’s a really beautiful old steel railway bridge on your right. I could only catch the briefest shadow of it from the street lights. Hazelhurst is just a few miles further along, then Baxley, Surrency and Jesup. Once upon a time, the Waffle King chain had a footprint here, with at least three restaurants on this road. Now the only one in south Georgia is in Hinesville. After Jesup, there is the trip’s only patience-testing leg, a thirty-five mile straight line through endless pines until the outskirts of Brunswick. Considering that the best alternate to get down here is using I-16, which is a hundred and fifty miles of patience-testing, I often prefer to go this way.

On the other hand, I-16 does have Jomax. It’s been an age since we stopped there, hasn’t it?

3 thoughts on “Barbecue on the Golden Isles Parkway”