A couple of weeks ago, I was invited to join some other local media to learn a little more about Blue Bell brand ice cream, and made my way over to Hal’s Kitchen, a cooking school in Sandy Springs for a light lunch and several scoops of their delicious desserts. I left with the words of Monty Python‘s Mister Neutron ringing in my ears, as he told his lady-love “I can eat an enormous amount of ice cream.” Afraid I can’t quite eat as much as he could.

Blue Bell seems like it’s been around forever, but it only made its way to the Atlanta market in 1998. They are based in Brenham, Texas and are the third largest brand of ice cream in the country, despite only selling in twenty states. They opened a second creamery in Broken Arrow, Oklahoma, and, more recently, opened a third in Sylacauga, Alabama, in a facility formerly used by Flav-O-Rich. I commented that I had recently driven through Sylacauga on my circumnavigation of Alabama. That certainly is a nice town.

They started as the Brenham Creamery in 1907, taking the name Blue Bell in 1930, but didn’t actually start distributing to grocery stores in towns as far away as Houston until the late ’60s. Since then, they have grown very slowly and deliberately, penetrating grocers’ freezers with their distinctive, multi-colored packaging. I had never considered this, but almost all of Blue Bell’s competitors use some form of uniform packaging. The rainbow appearance of the Blue Bell section, with different colors for each flavor, is meant to evoke an ice cream parlor.

Blue Bell was the first company to mix the now-standard Cookies & Cream flavor. Like many of their competitors, they once used Nabisco Oreos – Dippin Dots still does – but today, the Blue Bell bakery, next door to the Brenham creamery, turns them out. 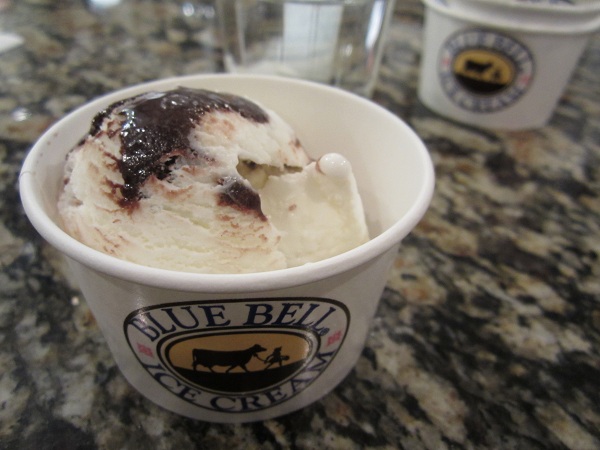 After viewing a cheesy-but-fun video about the company, made with higher production values than any corporate video I think I’ve ever seen, we dug into some of their flavors. We enjoyed Homemade Vanilla – the company’s flagship, introduced with its 1969 push into Houston and, apocryphally, in smaller quantities than the Houston grocery accounts actually wanted to order – Pistachio Almond, Strawberry Banana Pound Cake, Cookies & Cream, Coconut Fudge, Banana Split, and finally Rocky Mountain Road, which was introduced in the Colorado market first. Honestly, I don’t care for coconut at all, but the other flavors were all very good. I’m a simple traditionalist and usually like vanilla the best, but I think that the Cookies & Cream was my favorite.

Strawberry Banana Pound Cake has only just been released. If you are looking for something new to bring home, then I would certainly recommend giving this a try. I thought the flavors mixed together really well, and it was just sweet enough to satisfy without being overpowering. 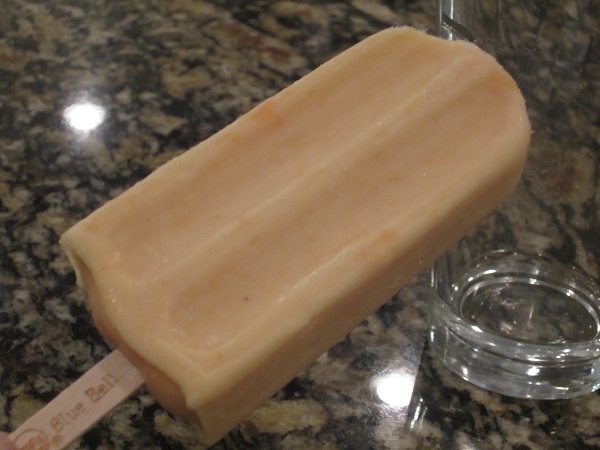 They also brought along some of their new peach-flavored Fruit Bars, which are made with pureed fruit and are only 70 calories. Blue Bell has sold this product in a strawberry flavor for a couple of years, and have recently rolled out peach and lime. This was completely wonderful, with a great texture, both firm and yet soft. It had me clamoring to try the lime, and for June to hurry up and get here, so that we might conspire to get some fresh peaches from Lane Southern Orchards in Fort Valley.

I certainly enjoyed meeting the folks from Blue Bell and Hal’s, and sharing a little shop talk with some of my fellow writers and pals. As I left, though, I reflected that I probably had a few more calories for lunch than I really needed. I made sure to have a nice salad or two in the wake of my ice cream indulgence!