This is Marie, contributing a little article about something sweet. This time it is about a place called Ray’s Donuts. Ray’s is a recent addition to Canton Road and quite a noble one at that.

The kids and I went up to check out the place on a Sunday morning because I had promised the girlchild doughnuts as a reward for cooperation in a fit of housecleaning I planned to do. However, after just a few loads of laundry I realized that the magical morning freshness time was rapidly going away, and that we should probably go over pretty soon to give the place the best chance. I shouldn’t have worried; they changed out three trays of doughnuts in the brief time we were there.

Even though I’ve got a sweet tooth the size of my head, doughnuts have never really been my thing. Partly that is because I like things such as fruit and yogurt and such for breakfast, and so doughnuts are not generally all that fresh by the time I feel like eating them. Partly it is because when I do get into the mood in the morning it is a disappointment to go to a supposedly high-volume chain store, buy a couple, and find out that they’ve been sitting on the shelf just a bit too long already. Stale doughnuts are not anyone’s thing. Ray’s does not have this problem. We got a variety of flavors, including from a selection from one of the trays that didn’t have much left on it, and all of the doughnuts tasted fresh and wonderful. 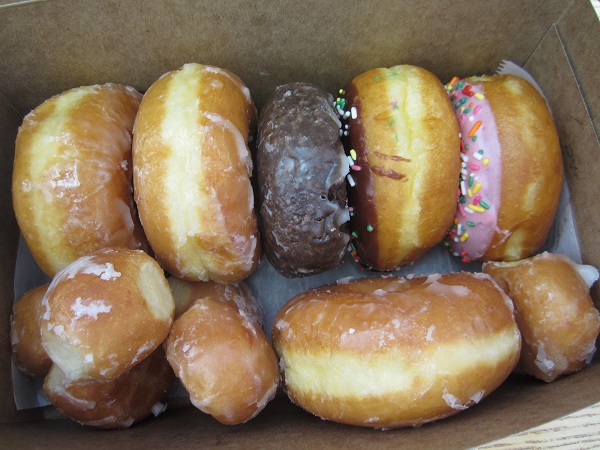 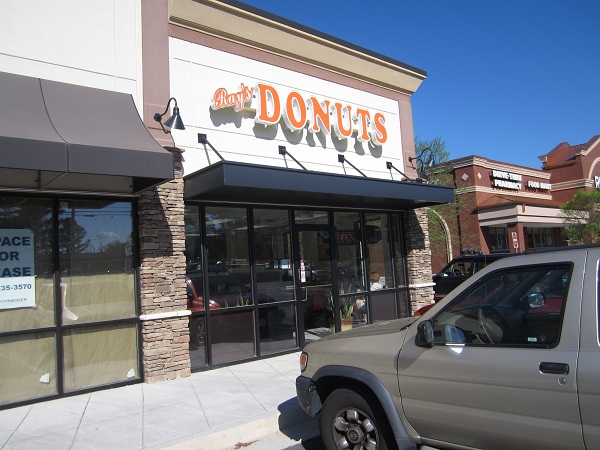 There was a pretty steady stream of people coming through the doors so we didn’t have a chance to chat with the folks behind the counter without being uncivil to the other customers behind me in line. One of them, while placing a new tray of doughnuts in the rack, did confirm that he had previously been with Dough in the Box. The place does have that flavor; once I bit into a doughnut it did taste familiar. They even give the free doughnut holes to fill up your bag or box. I had to go back and get another doughnut for the girlchild who’d had her heart set on a Boston Cream, and they even put doughnut holes into the bag with a single purchase. There are only a few benches for people who want to eat in the store. It’s more of a takeout sort of place. However, unlike many takeout places that make you feel rather as though you’re eating over your sink when you stay in the store, there are cute pictures up on the wall (doughnuts, of course) and the morning light makes the place cheerful and welcoming.

It’s a shame the place is in the opposite direction from where I need to drive in the mornings. Now I want to go pick up a box to bring to work!