There have been a few instances over the course of this story where I have written about, and sneered about, the fake nostalgia of “fifties diners.” You know the ones that I’m talking about. In the actual 1950s, there were probably no posters of James Dean or Marilyn Monroe in diners, any more than today you see posters of, I dunno, George Clooney or Jennifer Lawrence in contemporary-designed restaurants. And you certainly didn’t see any posters of James Dean and Marilyn Monroe, drawn by some barely-adequate airbrush artist, sharing a chocolate malt back then. I like authenticity.

So a little takeaway joint like Peace Love and Pizza, with its similarly fake early seventies nostalgia, decorated with pretty much the same posters available from any poster shop that sells overpriced Led Zeppelin and John Lennon prints for dorm room walls, should have me rolling my eyes. But I dunno, I guess this place caught me in a good mood or something; between reading two Richie Unterberger books, listening to the complete Byrds catalog and watching Easy Rider on YouTube over the course of March, I was predisposed to go lightly on any place that could keep the good times coming.

But there was a dark side to the hippie dream, you know. That Paul Kantner, he smoked an awful, awful lot of pot. So was this place going to sell me on their utopia, or does this article mean that some harsh, harsh waves are coming this joint’s way? 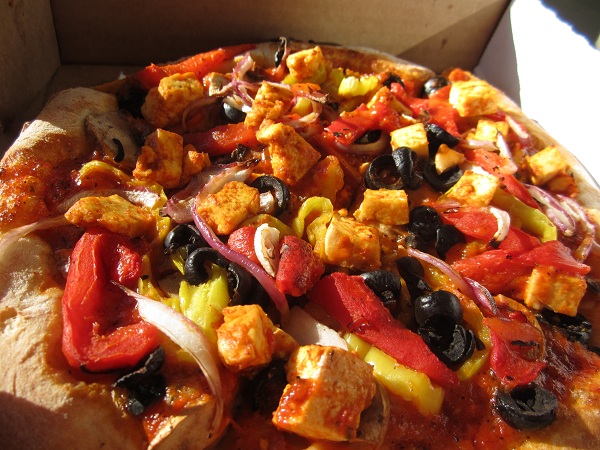 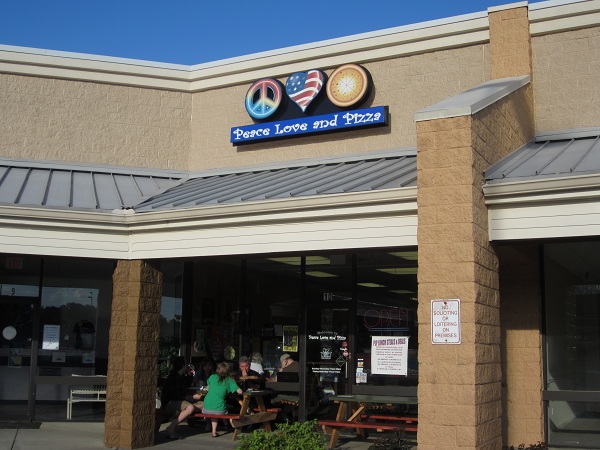 Well, turn it up, man, because, surprisingly, this place is really, really good. You know, I clearly, clearly remember one evening in my own dorm room days eating this one delivery pizza, probably while discussing a hundredth-generation photocopy of the “O.H. Krill” UFO report, and somebody saying “This pizza would be good if we were all stoned.” This is not that kind of pizza. It’s good no matter what the state of your consciousness.

To test the validity of this place’s claims, I ordered a vegan pie, which came with red pepper sauce, tofu, mushrooms, black olives, red onions, and banana peppers. I then said that if the rest of their specialty pies are this good, then they’ve won me over completely, because this was truly wonderful. I really liked that sauce and that chewy crust, and all of the ingredients tasted very fresh. Perhaps I don’t entirely care for this style of pie – I call it “college pizza,” but perhaps, from Slice’s list of styles, we could call it “pizza parlor pizza” – quite as much as I do Neopolitan or New York-style, but this really is a standout, regardless of how you like your crust or your preparation. Actually, I like Neopolitan (Vingenzo’s, Varasano’s, Fritti) so much better that it’s almost like a different classification of food entirely, but play along.

Marie’s pie was the Moonbeam Meatball Dream, and I was not as wowed by it, but it was still very, very good. It has a really thick crust and is topped by a great big pile of sliced meatballs. These two had me looking back over the menu and considering what to order for our next visit. After I had placed our order – my daughter, keeping it simple, just went with pepperoni slices – I had continued reading and intrigued by the Demon’s Spicy White Love Pie, with ricotta sauce, chicken, tomatoes, peppers and hot sauce. It looked really good, so much so that until I was wowed by my own vegan pie, I was kicking myself for not ordering it. So, next time, I’m having that.

Dave and Richie DeSantis, the owners, are brothers and Kennesaw State alumni. Their tiny little place is principally a delivery store that caters to nearby KSU (we are just outside their radius, we learned), and seems to employ a good number of Owls students. There are two tables inside and two outside, and, sadly, no ice water from a soda fountain, so our next visit, we’ll probably carry our pies back home. On the other hand, they do sell those big cans of Peace Tea, which I like.

Okay, so the food is good enough for us to let the fake, dorm room nostalgia slide. But should this place expand to a larger facility, I fully expect to see some lava lamps and low lighting, a jukebox with period-accurate tunes on it, some bead curtains and tiki dolls, and one of those old pull-handle cigarette machines. Okay, so we know better than to smoke these days, but every restaurant in 1971 had one, and if you’re going to do it, do it right. I also want my server to wear a Mr. Natural T-shirt and to apologize for being so bummed, it’s just that what happened at Kent State is so heavy, man. Keep on truckin’, y’all.