I don’t remember where we ended up eating on the occasion in question (it’s been a while), but as Emily from Spatialdrift and I were bouncing ideas back and forth about where we should dine, she said that the next Buford Highway restaurant on their expedition was going to be Bellaggio’s Ice Cream, a freestanding building in the Treasure World shopping center. It’s where Hae Woon Dae and Don Quixote are, along with at least two strip clubs and a porn theater. I passed on it, as we were saving Bellaggio’s for dessert the next time that we had supper at Man Chun Hong.

Some weeks later, I woke one Sunday craving MCH’s Shan City chicken for lunch, for what must be the umpteenth time. So we drove out to Buford Highway for me to have this yet again. I really have no idea what else is on their menu. We’ve gone four times and I’ve had the Shan City chicken every time. It’s just so darn good that I am not interested in anything else they make quite just yet.

Bellaggio’s sounded like a good idea for an after-lunch snack, particularly since our three year-old was in such a good mood and behaved so well. Like some of our favorite ice cream places in Tennessee and North Carolina, it would also do as a lunch destination, as they serve sandwiches and hot dogs, but those will have to wait for another day. 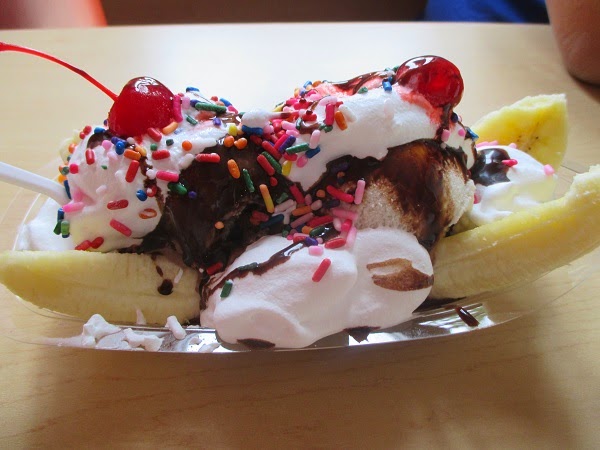 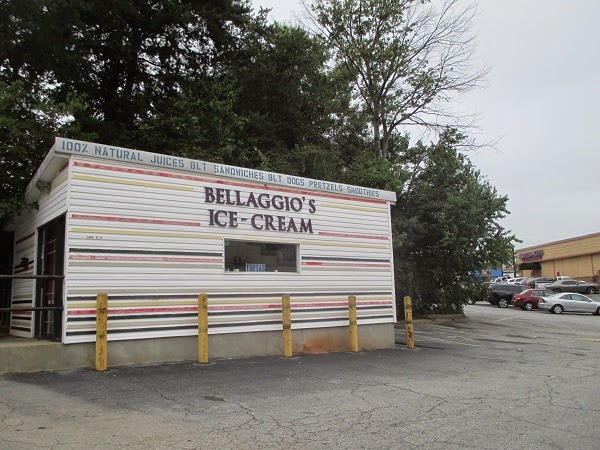 Actually, despite the name suggesting ice cream, we were the only group who was enjoying any on this afternoon. The tiny place was almost full with people eating torta sandwiches and giant bowls of weekend soups while watching the soccer highlight show. The emphasis is on “tiny,” and they’re cash-only. Earlier this year, Thrillist called Bellaggio’s one of Atlanta’s ten best “shackstaurants,” a little portmanteau that’s so lovably silly that I will use it whenever possible.

We shared a scoop of strawberry and a scoop of lime sherbet and a banana split sundae with chocolate chip and banana. They get their ice cream from Hershey’s, but many of their other treats are made in-house. Some of the employees returned from a grocery store run when we were there, bringing in huge bags of carrots and other vegetables for their smoothies. They also make Chicago-style hot dogs, and we left curious to come back and try a torta sometime soon.