Is this the oldest business that we’ve visited for our blog? Tony’s Ice Cream in Gastonia has had a line out the door for ninety-nine years. They’re planning to celebrate the big centennial next year. How awesome is that? Congratulations to this old place for such a long time open to the public. They’ve even been in their current home longer than most restaurants have been around. They moved to this ugly yellow brick building in 1947. I’m not taken with its outside, and you’ll have to take my word that the inside is a lot better looking, because when I was there in the early evening, it was completely packed, and every lovely inch of old, formica table was taken, so I couldn’t photograph anything well.

This place has lots of guests who line up for sandwiches and hot dogs, but the longer of the two lines is for the ice cream, which is made in the cavernous building next door. They usually have twenty-four flavors available at any given time, and somehow the ten minutes that I spent waiting in line, I did not notice that one of them was a little legend in my family, about which more in a second. No, I settled on a cherry vanilla milkshake, figuring that would do to sip on as I drove back to Atlanta. I also figured that I wouldn’t spill a drop. Then I saw the giant beast of a thing. 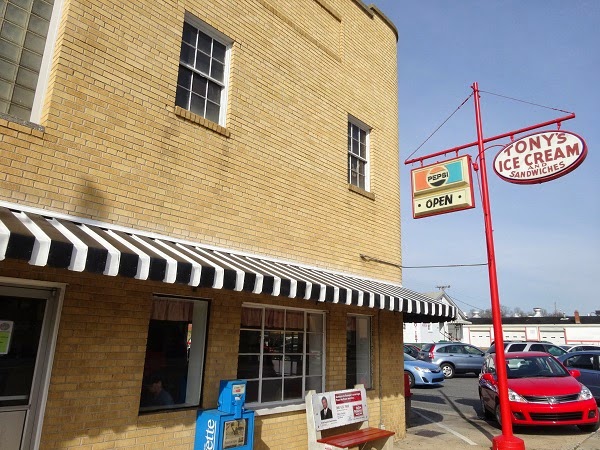 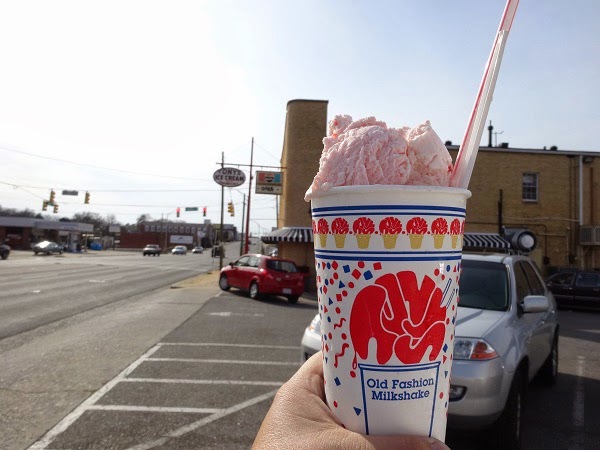 Boy, do you ever get your money’s worth here. Not content to give you a giant cup of excellent milkshake from their creamery, they drop another whacking huge scoop of ice cream on top of it. Guests have been leaving with sticky hands for almost a hundred years now.

After I ordered my cherry vanilla shake, I lost sight of the fellow who went to make it. There were eight or nine other people on the ice cream end, assembling cones and banana splits and everything under the sun. Next to me, a young mom received the first of a few cones and passed it to one of her daughters. The ice cream was purple. I double-checked the menu and noticed that they serve grape ice cream here. How’d I miss that? “You guys make grape ice cream?” I asked the fellow passing the cones. “We invented it,” he replied. He told me that the Coletta family – ninety-nine years and still family-owned! – developed the recipe in the 1920s.

Longtime readers with a taste for minutiae may recall that I’ve mentioned that my mother, who grew up in Fort Payne AL, used to love grape ice cream when she would find it at the Chattanooga-based Kay’s Ice Cream stores in northern Alabama and northwestern Georgia. Kay’s and its sister Kay’s Kastles still exist, but today their ice creams are made by either Mayfield (for the Kay’s Kastles in Chattanooga) or Greenwood (for the Kay’s in Knoxville), and neither store offers grape any longer. The Kreme Delite in Athens AL will make a grape milkshake, but I strongly suspect that it’s made with either Welch’s or Fanta.

Tony’s has the real thing. It’s a flavor that became a slightly larger regional favorite for a few years before it shrunk back to its home. From the plant next door, they package ice cream for wholesale business, and Tony’s can be found in grocery store accounts around Charlotte and Rock Hill SC. So its spread is a little larger than Gastonia’s unusual slaw/sauce as seen a couple of chapters ago at R.O.’s, but it’s still pretty localized. Does anybody know of any grape ice cream anywhere else? Is there a challenge to Tony’s claim that they originated it?

As for the cherry vanilla, it was not bad at all, but I would have liked a stronger, sharper, cherry flavor. This was pretty mild. I’d also like to say that I finished it all as I made my way back through South Carolina and down I-85, around Atlanta’s top end perimeter and back home, but I did eat an astonishing amount of food on this trip, and that was a mighty big milkshake.

I enjoyed another forty-odd minutes in the company of Clemson’s astonishingly good student radio station before the sun went down, and got back home a little before ten. What a terrific trip it was. I’m penciling in the details for the next two-day solo jaunt, which I hope to take in November.