One minor frustration in blogging – this really, really is a first-world problem if ever there was one – is that sometimes, people mistake our enthusiasm as though we’re shooting for authority. I’ve actually been asked for suggestions quite a few times with this sort of lead-in: “Say, you’re the barbecue expert, where should I…” or “You know everything about Chattanooga, right?” No, and no! Marie and I, we’re no experts, we’re just enthusiastic learners. And sometimes, we make mistakes. Ridiculous mistakes. Like the time last month when we accepted an invitation to sample a new bottled vodka soda on the eve of its launch in Atlanta and Los Angeles, having no idea whatsoever what vodka soda actually is.

(It’s perhaps a good thing that we didn’t, because, as this awesome rant from a New York City bartender suggests, there is some profound displeasure from certain mixologists toward people who order vodka sodas. Gracious.)

I don’t know all the details, but up in Alpharetta, there used to be a growler store called Blind Murphy. The owner planned to launch a line of hard soft drinks (I love that) called Naughty Soda, but I can’t find any evidence that these ever launched beyond some preview tastings, and the website’s been down for a month. Perhaps they’re still in development, but the concept stuck with me – or maybe it was the sample artwork for the soda labels, with ’50s-style rockabilly pinup girls – and I looked forward to learning more about it. So when the invitation to try some vodka soda came about, I mixed up the two.

No, we’re no experts. Thanks for letting us play along, though.

Jane St Vodka Soda is the brainchild of the awesome Liz Wiltgen, an Atlantan who lives in Los Angeles and owns a food truck called – prepare to groan – Ice Ice Shavie. Compounding our non-expertness in the world of everything, I had no idea that you can get sno-cones or shaved ice anywhere made with all-natural hand-mixed syrups. You certainly can’t around Atlanta, where even the good ones use artificially-flavored, mass-produced syrups. So Ms. Wiltgen has been mixing her own flavored syrups, sweetened with agave, for the truck to much local acclaim, and decided to branch out into flavored vodka soda. 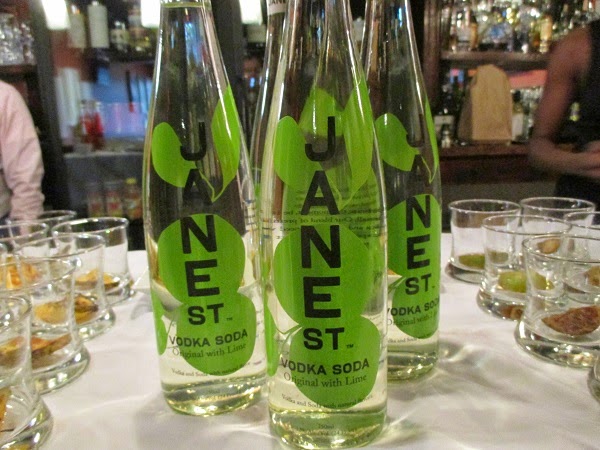 To be clear, this is not what I was expecting at all. I was thinking these were 12-ounce bottled sodas spiked with a little vodka. No, these are cocktails – fairly low-calorie ones at around 150 apiece – with a somewhat higher alcoholic content than I was used to. They are meant to be poured over ice and given an appropriate garnish, or perhaps a dash of bitters. And they are very good!

The drinks come in four flavors so far: Original with Lime, Grapefruit-Meyer Lemon, Pineapple Jalapeño, and Peach Peppercorn. Of the four, the Peach Peppercorn was my least favorite, although it was still quite tasty. It was just a little too sweet for my preference. Interestingly, the Original was the last of the four to be developed. I understand that this is a pretty straightforward translation of what a bartender will typically make you, only ready-mixed for quick pours at home while you’re entertaining guests. 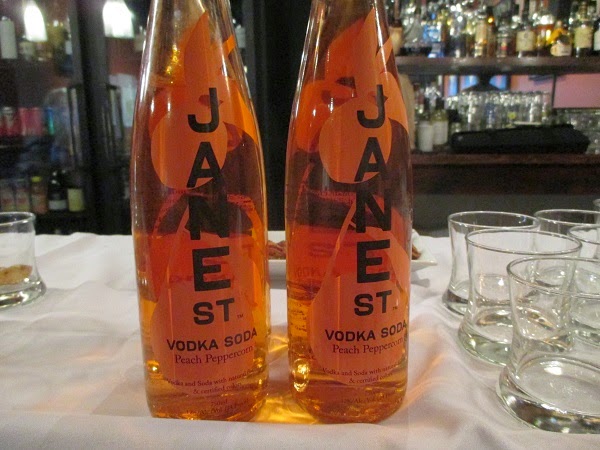 After thinking about it, the Pineapple Jalapeño was my favorite, and, perhaps, the consensus favorite of the group that assembled at Savi Provisions’ tasting room in Buckhead for the launch. It’s just excellent, and the layered mix of flavors is really complex and fun on the tongue. Don’t let that mean ol’ bartender in the link above sway y’all from trying this. A glass of Pineapple Jalapeño would go very, very well with a plate of pulled pork. There is a sweetness, but it’s very mild, and the spice kicks in after it rolls in your mouth for a couple of seconds. It’s not at all hot, just a slight zing to finish a sip. I know very little (very, very little) about cocktails and am in no rush to learn, but I wouldn’t mind ordering this in one of Atlanta’s barbecue joints that has a liquor license.

That’s not to say that I wouldn’t be more likely to have a nice glass of sweet tea. I’m not exactly the target audience. But darned if I didn’t enjoy this a lot more than I thought I would, and I was very happy to learn some new things. Jane St is a very interesting concept, and, if you’re among the cocktail crowd, worth looking into.

(As noted, this was a media event and our samples of this product were complimentary. It’s our policy to always note when we’ve received our meal without charge. If you would like to invite us to your restaurant’s media events or your product launches, please drop Grant a line at gmslegion@gmail.com .)