Talk about brand confusion! Tomas Lee started his little mini-empire of food trucks and restaurants in 2009, operating with three different names: Yumbii, Hankook Taqueria, and, in 2011, Takorea. They all serve approximately the same food, but for some goofball reason, he decided to give each entity separate names. Now a second Takorea store has opened, in the former home of the dearly missed Guthrie’s in Dunwoody, and the experience is apparently not very much at all like the the first store on Juniper Street, but rather more like Hankook.

I’ve never been to the original Takorea myself, but as we sat down with Emily and Adam from Spatialdrift and their friend Vasilios for supper here one Saturday last month, Adam told us that location is a full-service restaurant, but, perhaps because of the small size of this place – increased by way of a pretty large patio build-out – this is a counter-service version. The space really does hamper their drink service. They have a soda machine behind the counter, but the person at the register will hand you a glass and point you to a service island if you’d like water or tea to fill yourself. To deal with the surprisingly long lines at the cash register – a problem that poor old Guthrie’s never had – they will send out an additional employee with a tablet and Square reader to take credit card orders. 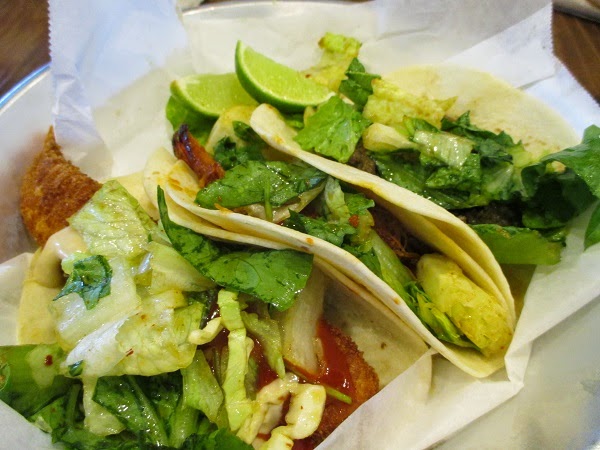 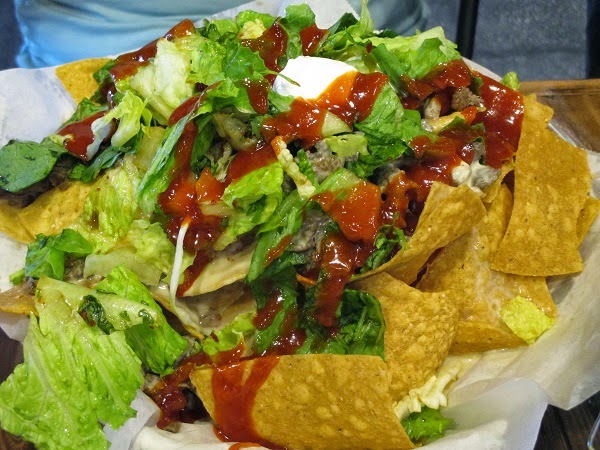 Marie had never been to Hankook before – I’ve been about three times, I think – so this was her first experience with Lee’s gentle Korean-Mexican fusion, which he’s calling “MexKorean.” This has never been a place for a strong or bold blending of flavors, which has occasionally netted Lee some negative reviews for being too timid in the kitchen, and just wrapping standard Korean fare in tortillas. (See Foodie Buddha and The Food Abides, linked below, for some particularly harsh thoughts.) She ordered chicken and fish tacos along with a side of pork dumplings with a sesame soy sauce and really enjoyed them. She was especially keen on the fish taco, saying that she likes it even more than El Senor Taco.

Vasilios had a burrito, priced right at about $8 and, he said, quite tasty. Adam and Emily ordered several tacos and the gogi nachos. I wouldn’t have those again myself; the bulgogi is about the only thing from Lee’s kitchen that I don’t particularly care for. 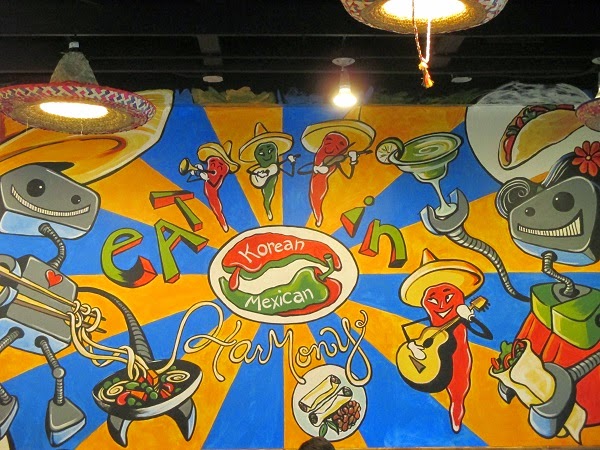 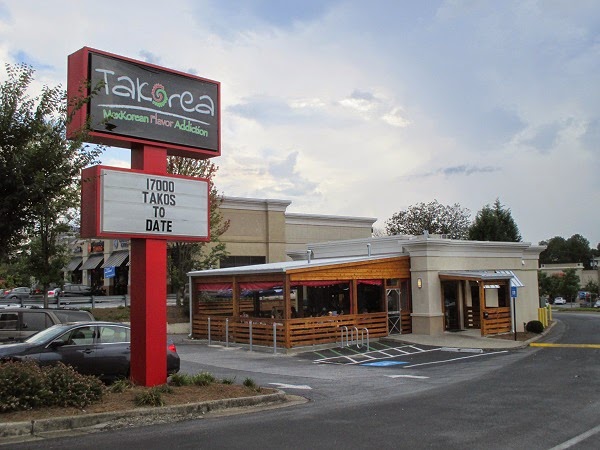 As for me, believe it or not, I had just one single pulled pork taco, and that was all. I like the way they do their spicy pork here – I’ve had it on the sliders at Hankook and was very pleased – but that was all that I could stand to order. Earlier that day, you see, I had the great pleasure of serving as a judge at Taste of Kennesaw and, even with small sample portions and bites, ate more than my share for the day! So a single taco was all that I needed, and it was just fine.

Other blog posts about the first Takorea on Juniper: