I had an internal schedule to keep as we raced down I-75 – well, Marie raced and I napped – to get back to Knox County, Tennessee. My daughter has family there, and I’d offered to let her kick back with them for a few hours while Marie and the baby and I went out and ate and played around Knoxville. The girlchild was duly deposited with her aunt, and we drove out to East Magnolia and pulled up at Pizza Palace, the home of Marie’s favorite pizza.

We’d be doing two drive-ins on one trip, especially since it had been an age since Marie was last actually in Knoxville herself – two years, honestly – and even when the general goal is to explore new places and new tastes, two years is a long time to go without your favorite pizza. We decided against lingering in the drive-in bay, however, because of the really unusual and unpleasant experience of a small mob of people – looked like employees and their friends – having an extended cigarette break behind the building, with the wind blowing their smoke right into our car. So once Marie’s beloved ten-inch sausage and mushroom pie was delivered, we pulled on out of there and made tracks east.

I first read about Cardin’s Drive-In a few months ago at Chopped Onion (link below), which is one of the very best sites around for roadfood lovers. Wilma Cardin, daughter of WH and Pauline Cardin, who opened the roadside stand in 1959, is still in charge of the place, providing carhop service and some of the very best fast food burgers, shakes and onion rings in eastern Tennessee. Wilma’s daughter, in turn, runs the breakfast shift, and the business is very much a family affair. 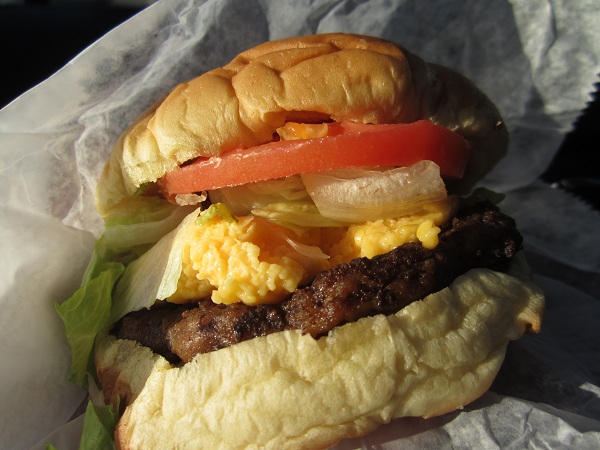 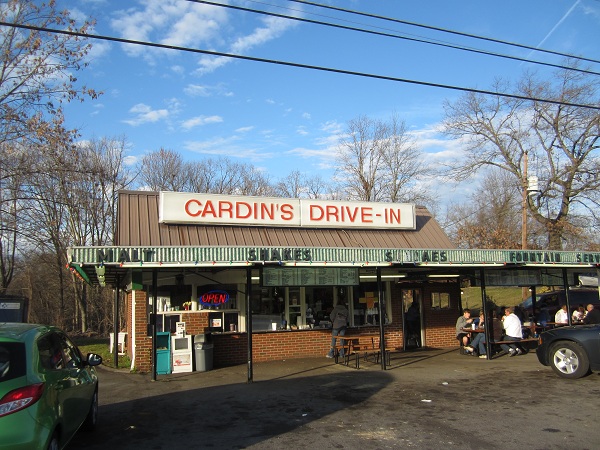 The Cardins have always prided themselves on staying debt-free and offering reliable, consistent service. They’re probably still around today because all of the high schoolers who haunted this place throughout the 1960s, cruising along the old Asheville Highway in the days before I-40 was built, made sure to keep the faith and keep coming back. The basic fact that the burgers are downright amazing is almost beside the point.

Simply put, I draw a distinction between what I call a “fast food burger” and a proper hamburger. Something from Zesto just isn’t meant to be as good as something from Farm Burger, though each may have its charms. Over the previous three days, I had five fast food burgers – four of them very good for what they were – and one proper burger, which was in a different league. But darn if the pimento cheeseburger at Cardin’s wasn’t better than every one of them, even the excellent high-end burger at Troy’s in West Chester that was made with fresh beef from the butcher shop two doors down. Admittedly, a great big glob of pimento cheese makes everything better, but this was a juicy, drool-worthy, completely awesome burger.

It was absolutely worth the drive. Add to it the wonderful, friendly service from our carhop – did she really say that she’s been doing this for thirty years?! – then, as Marie enjoyed her pizza and I enjoyed my pimento burger, and the baby enjoyed the cup of black olives that Marie procured for him at Pizza Palace, I think we can safely say that our li’l Mazda simply hasn’t had a better meal inside it.

We even lucked out with the onion rings. I’m on the record as thinking that Pizza Palace makes some of the best in the world, but, thinking ahead to Cardin’s, we completely forgot to order any until we had already driven away. Certainly, the replacements at Cardin’s were not quite as amazing at Pizza Palace’s monsters, but they were still really good. And I don’t know how a vanilla malt made from basic soft serve goo could possibly end up being so tasty, but man alive, that was a great malt.

Then the question was whether this was going to be the best vanilla malt our car had ever seen, or could we find a better one before leaving Knoxville. In the next chapter, we’ll let you know how that went.