It’s not accurate to say that our dining out on this trip went off without a hitch. We hit every restaurant that we hoped to visit but one: the Tolly-Ho in Lexington. The plan had been to visit the Explorium Children’s Museum in that city on the way home, but first, we got a later start than we thought, since our visit to Jungle Jim’s was such an adventure. Then, as we crawled down the street in that city we were directed down, through bumper-to-bumper traffic, we saw that the Explorium didn’t have a dedicated parking lot, and all the surface lots were a steep $15-20 to park! Hideous traffic, very high parking charges, and twenty thousand people walking around in blue and gray… yes, that’s right, I forgot to check the sports schedules of the cities we’d be visiting.

While the Kentucky Wildcats have an uneven record on the gridiron, their basketball program is downright amazing, and even when they’re not the defending national champs, they’ve got one of the most dedicated fan bases in college sports, routinely selling out the barn that is Rupp Arena. Here we were, thinking we’d find a place to park and that we’d get a meal at one of the most popular near-campus joints in town while this mob ascended on the city to watch what would turn out to be an 88-50 thumping of the unfortunate Lipscomb University. No, we fumbled and redirected and made our way out of town after a considerable delay, resolving that we’d get something to eat on the way back to the interstate. 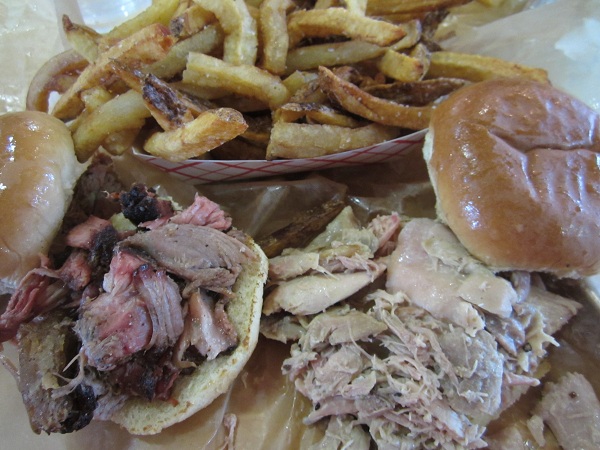 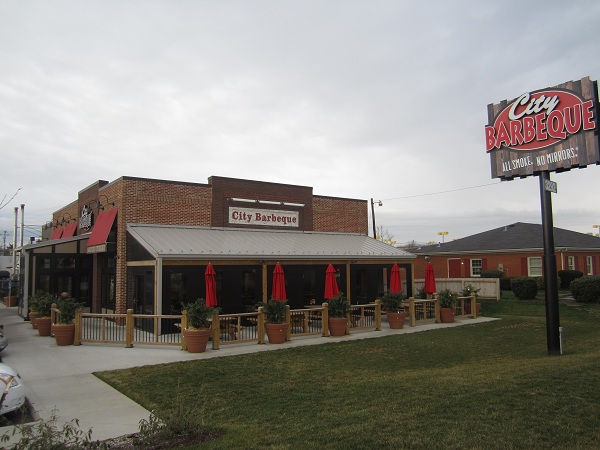 City Barbeque proved to be the only real option between downtown and I-75. I had heard of it in passing; it is a chain, based in Columbus, with twenty-two stores in Ohio, Indiana, and Kentucky, and, as happens with chains, it gets overlooked by hobbyists. However, we were pleasantly surprised by our visit. This is really quite a good establishment. It is horribly located near the intersection of Richmond and Man o’War, and not readily visible when coming from the city, but once we found it, we settled in for a good lunch.

Rick Malir and his team had spent the nineties winning awards on the competition circuit before opening the first restaurant on Henderson Road in Columbus in 1999. They expanded at the rate of about one store a year, moving into Toledo in 2005 and the Cincinnati suburbs in 2006. They first entered both Indiana and Kentucky in 2010. The Lexington store is their newest, and opened in the summer of 2012.

It’s understated, but there is a welcome sense of – and this will sound very weird – humility in City’s approach. They know full well that there isn’t really a barbecue tradition in the Ohio region, and what they are offering, respectfully, are the traditions of other areas. You see this in the awesome signage around the entrance and airlock, pointing the mileage to some of the nation’s legendary restaurants, including Arthur Bryant’s, Moonlite, Lexington # 1, and Parker’s. (And probably a pile of Texas establishments as well, but I don’t know any of those.) They make sure to explain which of their specialties are based on the common recipes from the Lone Star State, from Memphis, and from eastern North Carolina.

We each got the lunch special of a sandwich with two sides, although I made the atypical choice of picking pulled chicken after Marie and my daughter each selected pork, just to have some different flavors at the table. At seven dollars each, these were a good deal, even if the sandwiches were a little smaller than what we’ve seen at other places. The hand-cut fries and vinegar slaw were the most popular sides, and while I enjoyed the sausage and chicken gumbo a good deal, my daughter wasn’t taken with it. The baby really appreciated the sweet and sticky baked beans.

I confess that I didn’t take notes on the table sauces, and we are so backed up in writing that the details have slipped away, but the meats were all moist and smoky enough to not really need them. What did stand out as worth comment, even beyond the pickle bar (yes!!) was the welcome presence of Ale-8-One in the soda fountain.

Sure, we’d picked up a twelve-pack of cans from a Kroger in Ohio, but this is the first time we’ve ever seen this excellent ginger ale in a fountain before. Now, we usually don’t have soda with barbecue, preferring sweet tea or water, but I made sure to refill my drink cup with this for the road. I probably enjoy “Kentucky’s soft drink” more than most people in Georgia, and my hat’s off to the manager of the Lexington City Barbeque for keeping this in the fountain. Good meats, good drinks, chain or not, this is a good place to stop.

We’ve still got to make it to the Tolly-Ho sometime when the Wildcats aren’t playing, mind…