When you read article after article about hot chicken in Nashville, you’re certain to find references to hot fish as well. There are a few older restaurants that serve both of these, including a couple that have been on my wishlist for an age, but I still have a little daydream about tackling several of these joints, one after another, on one glorious and possibly painful Saturday.

So as not to disturb the sanctity of my wishlist daydream, I picked a totally different place to sample hot fish, Ed’s Fish and Pizza House, which some people claim originated the sandwich in 1972. That might not be accurate; when Michael Stern of Roadfood visited Ed’s, he got anecdotal evidence that a long-closed restaurant called Whitey’s was the first to offer the treat.

Sadly, hot fish is not at all like hot chicken, at least not at this joint. The sandwich that they serve at Ed’s is whiting, or catfish if you prefer, with onions, pickles, mustard, and a very healthy pour of a hot sauce between two slices of plain white bread. It is not meant to be saved for later. The soft bread isn’t going to last long before the mustard and hot sauce soaks through, and the fish is best consumed before it cools down too much. 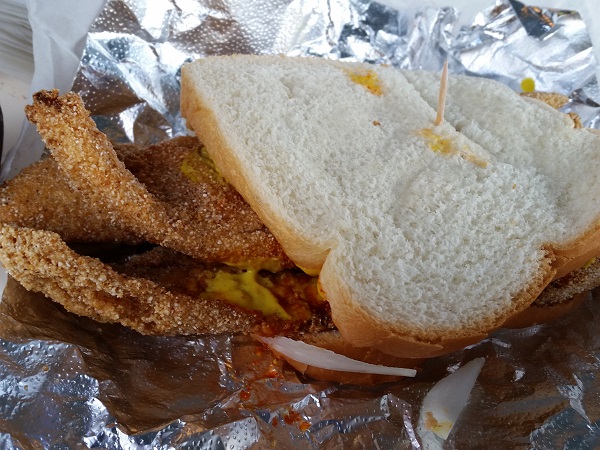 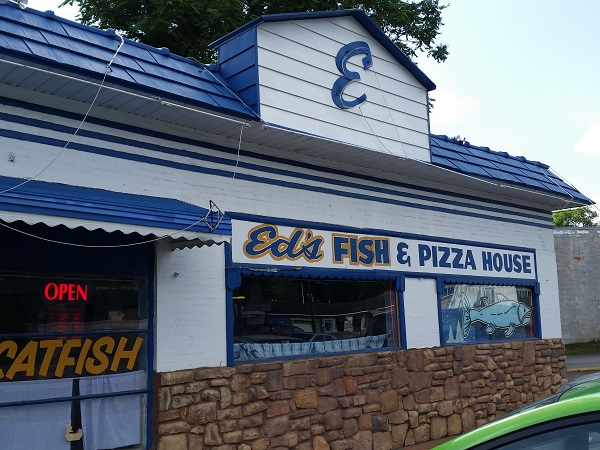 It’s just as well that we were not in the mood for pizza on this warm June afternoon. Despite their name suggesting pie, Ed’s Fish and Pizza House quit serving pizza at least ten years ago. No, this was just a place for me to chow down on some whiting while we took a break from driving. The rest of my group – my daughter and my friends Matt and Brooke – passed on anything here, planning instead to visit Pied Piper Creamery for a snack. We’d already bummed around some comic shops and thrift stores, and more shopping was to come in East Nashville, but here everybody waited patiently for me to indulge. The sandwich is good, if not outstanding, but I wonder why nobody has created super-hot breading like the chicken joints, using sauce instead. The breading is tasty, and I like the hot sauce, but it means the sandwich is inconsistently spicy.

Incidentally, all around the southeast, I’ve found businesses that have a drinks cooler instead of a six-head or an eight-head soda fountain, but Ed’s is one of the few that I’ve run across that has a Pepsi vending machine in the small dining room. That was unexpected.