I love it when a newspaper puts together a nice and entertaining backstory about a restaurant. A few months ago, Brad Schmitt at The Tennessean did a nice little writeup about Sean and Paula McNamara, and the story of how the two met, he a singer who was performing about 300 shows a year around town, and she a visitor from Northern Ireland who came by Mulligan’s, where Sean fronted the house band, and happened to hear him sing. They married three years after that and opened their pub, McNamara’s, a little more than a decade later. Sean still sings with his group Nosey Flynn four nights a week in the main room of the large restaurant. If this were not a weekday evening and our hosts had to get up at disagreeable hours and go to their jobs Friday morning, I’d have liked to have stayed and heard them play.

After shopping in East Nashville, which exhausted all of my daughter’s money and a little bit of mine to get her over the top, we went over to our friend Tory’s house to catch up, hear about her recent vacation to New York City, and rave about all the latest geek things that we love. (I’ve no interest in Game of Thrones myself, but we were all in agreement that the first season of The Flash was a million times better than it had any right to be, and completely wonderful, start to finish.)

Brooke and Matt were not really hungry for supper yet after their lunch at Center Point and snack at Pied Piper, but Tory was starving. She asked me where I’d planned to go, and I think that I surprised everybody by saying that I had not made plans, as I was sure they’d pick something terrific. (And if they didn’t, I was going to suggest King Solomon’s Gyros, so I guess that was technically a li’l white lie, but hush.) They settled on McNamara’s very quickly and, taking two cars, we convoyed from Inglewood to Donelson. 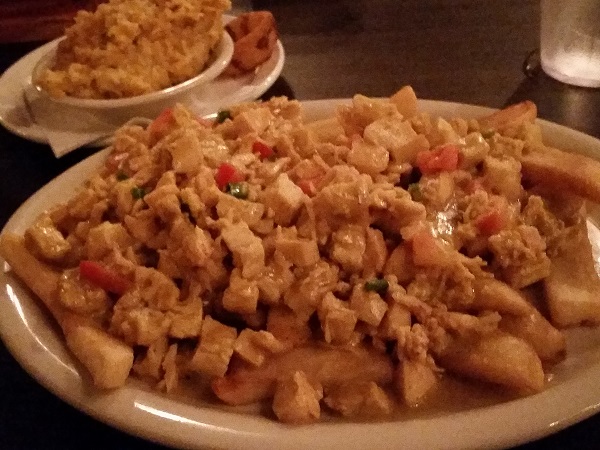 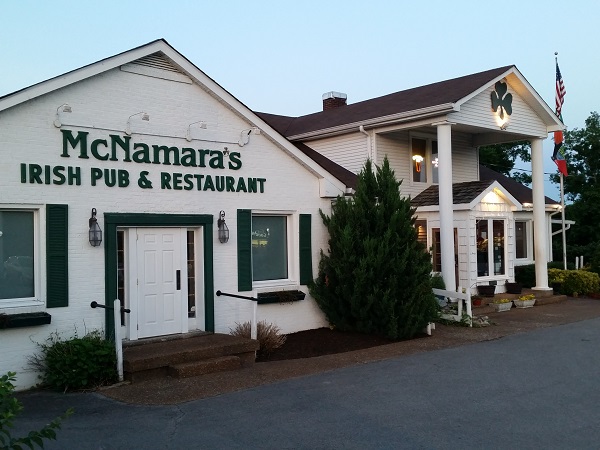 This is a really big restaurant, with multiple dining rooms, and a dense menu with lots of suggestions, ranging from what sounds like traditional (bangers and mash, fish and chips) to what looks to be ridiculous (Irish nachos?). They’ve got shepherd’s pie, and Irish stew, and steak & Guinness pie, and my daughter and I were both very, very indecisive. Everybody ordered something different, and the girlchild eventually settled on an appetizer order of loaded potato skins. I had an unusual little dish which is seen above, with apologies for the low light. It’s a chicken curry, very mildly spiced, served on a bed of steak fries. Guests have a choice of fries or mashed potatoes, but our server recommended the fries. I had mine with a very tasty little side of sweet corn casserole.

The service was really wonderful. McNamara’s is known for the black and tan onion rings, but I’m known for preferring onion rings made in-house. Our server told me that they were made in-house, and that was my original choice for a side with my chicken curry. She returned almost immediately to let me know that the kitchen had corrected her. For what it’s worth, Matt did get the rings, and they were pretty darn tasty, but I liked that corn casserole better, so it all worked out just fine.

Other than the music and food, McNamara’s is highly regarded for its whiskey. Their beer list is incredibly tame, and could use to be pepped up with some regional selections. I don’t know anything about craft beer in the Nashville area, but I would have considered ordering a stout from one of the breweries listed on this site. The boring beer list is even more remarkable when you look at the number of whiskies they carry. Basically, if it’s Irish, and their liquor distributor stocks it, McNamara’s carries it, with more than two dozen choices available at any time. Brooke enjoyed an Irish coffee after her dinner and said that it was really good, but we didn’t ask which whiskey they use for that. Incidentally, Tullamore Dew used to be one of my poisons. I wouldn’t sully it with coffee, though.

I’m sorry that we left before Nosey Flynn took the stage. Tory took my daughter back to her place, and I had to drive Brooke and Matt back to Antioch before returning to Tory’s to get some sleep, and we were delayed forever by construction on I-24 East. All things being equal, I’d have much, much rather have listened to Mr. McNamara sing than waste gas in all that backup, even if the three of us had fun drinking stories to share while we waited!

Other blog posts about McNamara’s: