When a new user review at Urbanspoon reminded that Mustard Seed was one of many, many Atlanta barbecue joints still out there for me to visit, I put it on my to-do list right after a farewell trip to Harold’s, which was closing after sixty-five years. Then I decided, upon reflection, that it was really the stew that I liked most about Harold’s and elected to visit both the same afternoon. Then the staff at Harold’s, evidently choosing to let closing-time malaise infect their morning routine, unlocked the door at eleven without actually having any stew ready. I only visited that restaurant once – it was the last “new” barbecue place that I enjoyed together with my dad – and couldn’t contribute to the overwhelming community sense that the old place had been falling apart in disappointment and lost opportunities for many years, but it was hard to leave that place without shaking my head and thinking that the nay-sayers might have a point.

For what it’s worth, Harold’s was subsequently so overwhelmed by business that they announced that they were sticking in there for the time being. I wish them well, and I hope they’ve learned a lesson about quality under pressure.

Anyway, Mustard Seed’s location in the West End is only about four miles from Harold’s, but navigating poorly-timed traffic lights and not speeding through areas under regular police patrol – I counted five cruisers between the two restaurants, and three between the restaurant and the Georgia Dome on the way back, plus two APD detectives in the joint ordering their own lunch, and who had such looks of “grizzled veterans of the force” that it seemed like they came straight from central casting – meant that it took nearly twenty minutes to get there, and by then I was very hungry and anxious to dig into some barbecue. With the ribs recommended, I ordered them dry and took a carry-out box to the barstool by the counter. Almost all of Mustard Seed’s business is to-go, but they have a little space available for us bloggers from the ‘burbs. 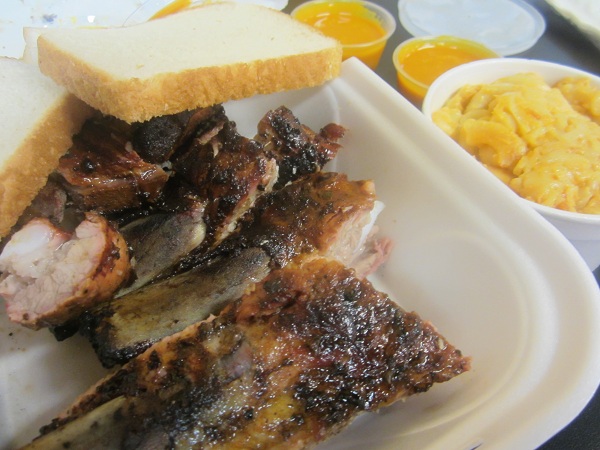 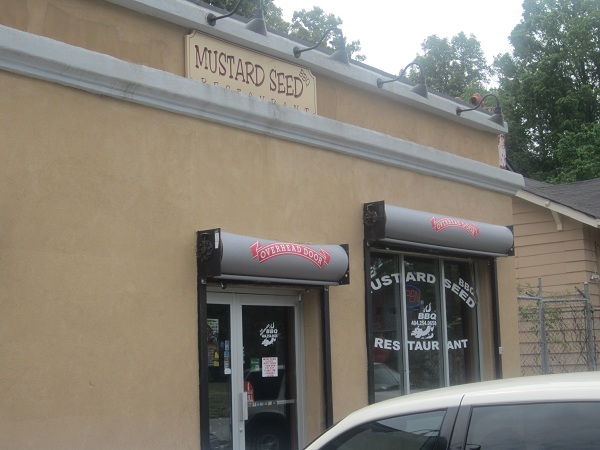 I’ve had better ribs, but not often, and not in Atlanta, although Fat Matt’s is in this league. These certainly do not need sauce. They are dripping with enough juice already, with a peppery, firm bark. They only fall a little off the bone, requiring some work, as good ribs do. Just a $7 rib sandwich provided all that I needed. I’ve always been amused by the tradition of calling a messy pile of bones a “sandwich” just because there are two pieces of white bread in the box with the meat.

As befits a restaurant with a name like this, the sauce is a sweet mustard-based one. Bright orange in color, it reminds me of the sauces at Vandy’s and at Beaver Creek. I poured a little over one of my ribs, just for the variety of having different flavors, but while I quite liked it, I preferred the meat without it. Much as I’ve been known to do at Dreamland – the suburban chain version over in Roswell, which I’ve not visited for more than two years, and not the original, which Marie and I have only been to once – I enjoyed using the sauce instead as a dip for my bread.

In short, this is an absolutely fine little place that grills up ribs better than just about anyplace else in Atlanta that I can recall. They boast that their chicken is something special as well, and I left curious enough to want to stop by again before too long.

Going home, I chose to drive north, toward the Dome, and managed to get stopped by sixty-eleven traffic lights before I got on the interstate what felt like many agonizing hours later. By the time I finally got home, I was hungry again.