Sadly, Vandy’s Bar-B-Q might well hold my personal, unfortunate record for longest time between being recommended a restaurant and actually visiting it. I have mentioned that, once upon a time, I maintained a small Geocities web page about barbecue restaurants in Georgia. Some reader wrote me in what might have been late 1999 – I seem to remember mentioning it to a classmate during that period – and urged me to come down to Statesboro to give it a try. Oh, it only took me the better part of twelve years, but I made it.

Over the years, I’ve seen many more references to Vandy’s. It is one of the state’s best-known barbecue joints. It was opened by Vandy Boyd in 1929, and moved to its present location in 1943. The building is quite remarkable. It manages to look like the bad side of town in a town that does not, in fact, seem to have a bad side. What we saw of Statesboro was a charming small middle Georgia college town – and yes, I do consider this still to be middle Georgia. It’s north of I-16 and Savannah, so it’s not strictly south Georgia in my book. Anyway, Statesboro looks like a quite nice little town, and while I’m sure there must have been a break-in or three over the decades to account for the bars on the windows and the industrial door, this restaurant looks almost comically out of place.

The business remained in family hands until Vandy Boyd’s son sold it in 1984. It was sold again in 2006. It has remained an essential part of Statesboro and Georgia Southern University life ever since. It really seems that whether they eat downtown or at the satellite location at the nearby mall – which keeps much more traveler-friendly hours, is open for supper and on Sundays – everybody in the region will visit Vandy’s at least once. 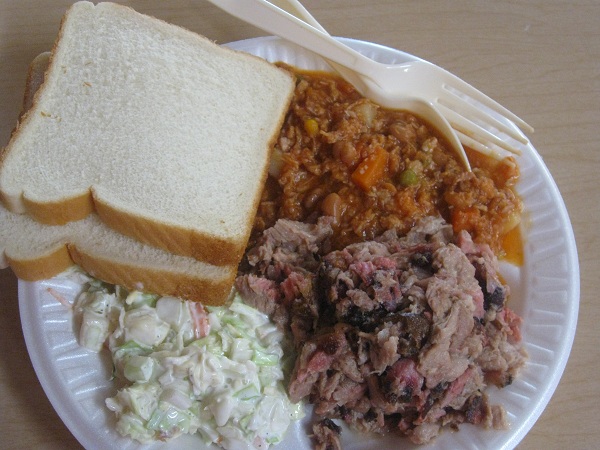 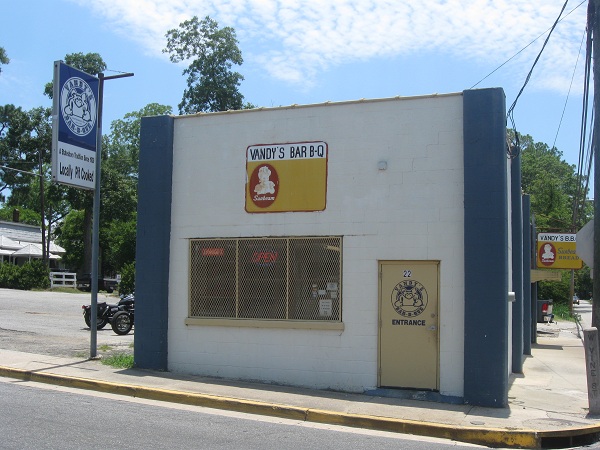 When we stopped in for lunch a couple of Saturdays back, apart from the mild comedic shock of seeing such an out-of-place building, we were most impressed by the Brunswick stew. This is much more like Kentucky’s burgoo than any other stew that we have tried in Georgia. It was absolutely packed with extra ingredients that you don’t usually see in stew, including pinto beans, carrots and peas.

The chopped pork is very moist and didn’t really have the flavor that I personally prefer, but I did enjoy it all the same. It did, admittedly, go better with the sauce than dry, and this sauce is one of the region’s best-known concoctions. It’s a South Carolina-style mustard-based sauce, but it is both sweet and spicy. It reflects the light like honey. The sauce resembles the house sauce used at Turner’s or Beaver Creek or whatever the heck that very good place out past Six Flags is calling itself this month. This was interesting and a really tasty meal. I won’t hype it up and claim it is one of my favorites, but it is certainly worth checking out if you’re interested in experiencing more of the striking variations in barbecue styles in this state.

I spoke briefly with our server and some of the staff behind the counter as Marie and my daughter left to get the start the engine and get the car cooled down before we loaded the baby in it. I think that we were all a little more interested in talking about my adorable son than about barbecue, so I didn’t really learn much more about the place than I had read online, but I was amused by the big ole shelf stacked with loafs of Sunbeam white bread. They go through a lot of that over the course of a week.

I loaded up on sweet tea and we got back out on the road. Neither Marie nor I had really driven through much of this part of the state before. If eastern middle Georgia can be described, and not completely without cause, as nowhere, then we drove through the middle of it. State Route 17 really is something to see if you’re one of those weird people who insists on seeing things that nobody needs to see. Louisville, Georgia, which, like Louisville, Kentucky is the seat of a county named Jefferson, might warrant another spin through to try a place called Purvis that I once read somebody praising. Marie had actually driven part of this run, on US-1, a few times driving from Augusta down to Saint Simons Island, but that corridor avoids GA-17.

Our last stop of the trip was, coincidentally, a place on the outskirts of Augusta, and it would prove to be the food highlight of our trip. More about that in the next chapter.