I find a lot of things frustrating about writing, and one of them is communicating that something is enjoyable, and sometimes very enjoyable, without being the number one absolute favorite thing that I’ve ever eaten. Part of me chalks this up to poor expression on my part, but I think that the reality is that it’s really poor reading comprehension on the part of one or two people who get the wrong end of the tail. I have been blogging or journalling for more than a decade now, and I’ve seen it happen quite a lot, even from close friends who glance over something that I’ve written and completely misunderstand it. I would much rather say that I must have been unclear than blame them for being numbskulls. Well, I guess it depends who is reading. I know one or two numbskulls.

But I was bothered by something that Chris mentioned when he came up from Jacksonville to meet us on Saint Simons Island. I’ve only eaten at three places in that town. One of them, Al’s Pizza, was pretty good, one was mediocre with excellent service, and one was probably only of interest to anybody on the planet as a neat example of a local chain with a regional specialty. I haven’t dished out very many bad reviews here, as it’s somewhat against the purpose of this blog, which is to recount our good experiences, and when I do elect to dole out the harshness, as I did to Johnny Rockets last month, I don’t draw undue attention to it. But something about my tone of voice is clearly overpowering my intentions and drowning my words, as Chris took away from my chapters about Jacksonville a different read than I desired, to wit that I didn’t like any of the three places.

This is exemplified by a commenter who read my chapter about Atlanta’s Antico, a dinner that I described as “quite good” and “worth a visit,” with pies that were “very tasty” and toppings that were “amazing” and “wonderfully tasty,” concluding that this was “a good meal” of “simply excellent pizza,” and told me that he couldn’t disagree with me more, because he liked the pizza. By expressing my misgivings about the surly customer service, the bizarre house rules about moving the chairs and the lack of drink selection, factors that added up to a disagreeable overall experience, I unwittingly turned the chapter, in that reader’s eyes, into a negative review.

Now, it’s true that I’m not immediately planning a return to Antico, but this isn’t because of anything that the restaurant did wrong. Well, perhaps apart from assigning that bored and grumpy girl to the cash register. It’s simply that there are many, many excellent pizza restaurants in Atlanta, and I like at least five and probably six of them more than I do Antico. It’s certainly true that you can get an awesomely good pizza at Antico. Everybody who eats there is guaranteed a really good pie. I like other people’s pizzas more. That doesn’t mean Antico is lacking. I blame the “snub” culture of our media. To hear pundits tell it, Susan Lucci was “snubbed” because she didn’t win a Daytime Emmy until after she’d been nominated eighteen times. I read that as “Susan Lucci was in the top five for eighteen consecutive years” and consider that a pretty huge achievement. Most of us are not going to have that kind of success in our lives.

This is perhaps a long-winded way to explain that, from my perspective, it’s praise when I say that something is pretty good. I’m not damning something when I say that something is not my favorite, or that other people like it more than me. Take the dearly departed Dressner’s on Saint Simons Island. I had several pretty good breakfasts there. I enjoyed it a good deal. It was by no means my favorite food, and Marie and her father both liked it a lot more than I did. That’s not to say that I didn’t like it, but that Marie and her father really liked it. It was a restaurant with a lot of nostalgia for them, and nostalgia, as I’ve noted, is one of the most important ingredients to any restaurant’s success.

I was sorry to hear that Dressner’s had closed. The new business that moved in, well, they’ve got big boy shoes to fill. But Marie’s got more of an iron in this fire than I do. It’s always a bummer to hear that a favorite place has closed, but the place where a girl and her dad have had so many important meals together is someplace extra special, and Palmer’s better not screw it up. 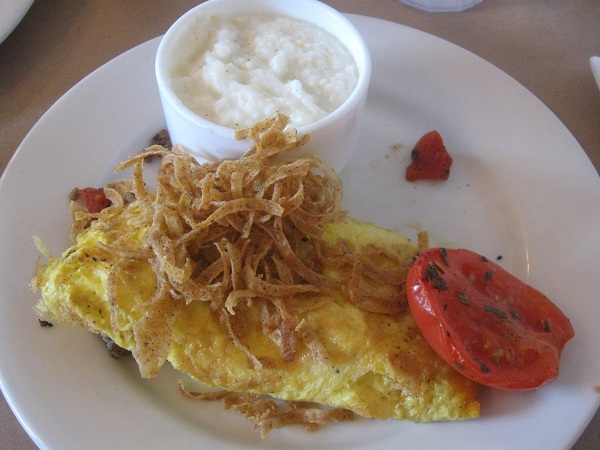 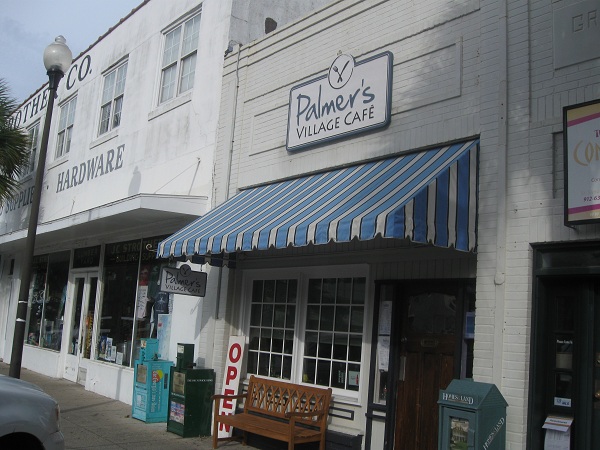 Believe it or not, I actually enjoyed my breakfast at Palmer’s last month more than any breakfast that I ever had at Dressner’s. I had a simply excellent omelet that came with tomatoes and fried, crispy onions and really enjoyed it a lot. Put another way, it really tasted like there was an extra step between the pretty good food available on the buffet at Sandcastle and the really excellent food that I got at Palmer’s. Everything tasted like it was made from premium, fresh ingredients. Those tomatoes were just divine. What I could glean from Palmer’s web site is that their head chef has been in the business for 27 years, and there is evidence that he likes playing with traditional offerings and guest’s expectations. I’m curious to try the poached eggs over ham and collard greens some time.

Marie and our daughter both had the banana pudding pancakes. Neither of them were quite as impressed as I was with my omelet. Here, nostalgia and expectations come crashing into reality; Dressner’s somehow had perfected the humble pancake. The ladies’ breakfasts came out a shade darker than pancakes should.

I asked Marie whether Palmer’s, understanding that it could never replace Dressner’s, was an acceptable substitute for what was missing. She said that she’d have to let me know. It will take many more visits to decide. I guess that means that we’ll be coming back. Frequently.

(Update, 8/14/11: It’s worth noting that, while we had several good meals at Dressner’s, the two meals that I’ve now had at Palmer’s just blow those out of the water, frankly. On this second visit, I enjoyed an “Islander” omelet, with cheese, bacon crumbles and cucumbers, and it was absolutely great. This was the best breakfast that I’d enjoyed in weeks.) 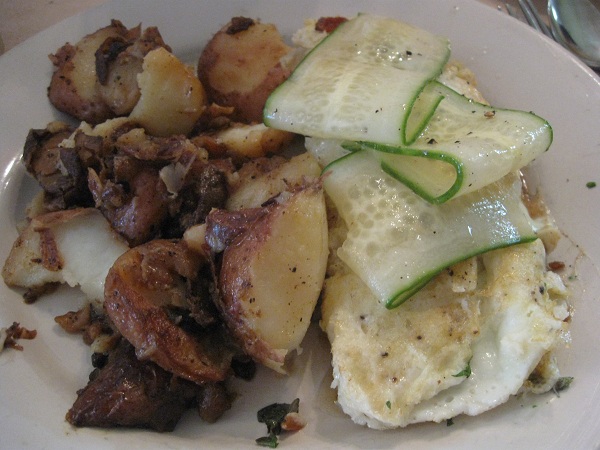