Here’s a restaurant that was just plain difficult to find. Google Maps gave us pretty good directions from Statesboro up to Thomson, a large town a little west of Augusta, but the last road that we were looking for was very badly marked and we spent twenty minutes looking around for the place. I keep telling myself to study the map a lot more carefully, and not rely solely on directions. One day, I’ll get it right.

We came to Neal’s on the strength of a short review by John T. Edge (him again!) in the pages of a magazine with the quite remarkable name of Garden & Gun. Published in the November 2008 issue, and dissected within the forums of four or five dozen travel and food message boards ever since, “100 Southern Foods You Absolutely, Positively Must Try Before You Die” suggested that a really good serving of hash and rice could be found here, so, revisiting the article in search of inspiration back in March, I added it to my to-do list.

I certainly love good hash, but it was only this year that I had it served over rice. Around Athens, where I learned to love great barbecue in the 1990s, hash is about as common as Brunswick stew. Some of those good shacks in the northeast corner of the state are gone now – I’ve probably mentioned how much I miss Carrither’s – and others, like Paul’s in Lexington, serve up a side that they call stew but it more closely resembles hash in its use of fewer vegetables and more of the whole hog. I read recently that Hollis Ribs in Athens has both hash and Brunswick stew on the menu. Now that, I have to try**.

When we stopped into Augusta’s famous Sconyers in February as part of a looping day trip through South Carolina, we had hash served over rice for the first time ever. That’s the default way to prepare it in this part of the country. I have to tell you, Sconyers gets all the press and all the praise, and it was a pretty good lunch, but what we found at Neal’s just blew that place completely out of the water. I don’t know why the heck more people don’t know about Neal’s. This is, flatly, one of the best barbecue joints in the state. 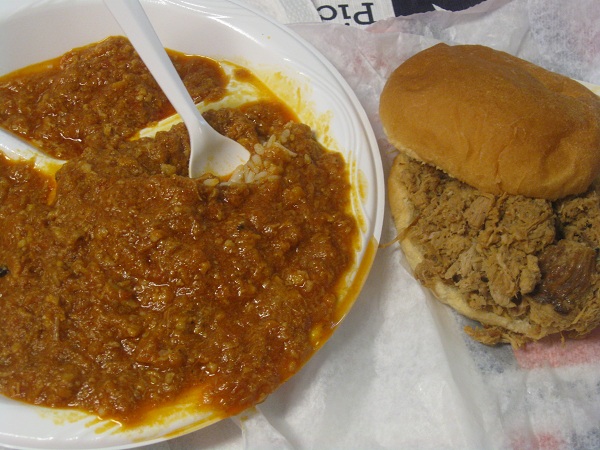 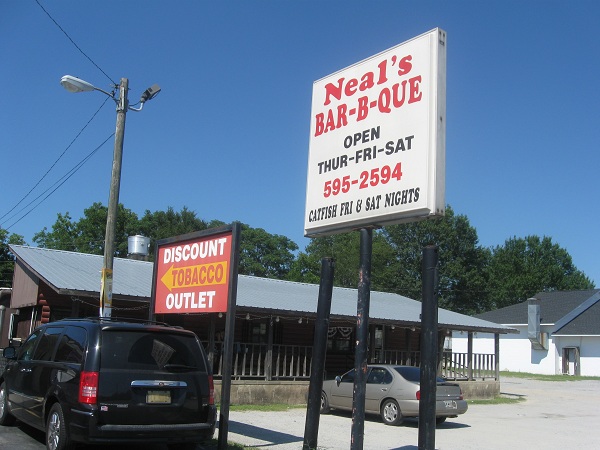 The prices are low here and the portions are huge. I ordered a chopped pork sandwich and a plate of hash, and watched as the girls behind the register dipped a ladle into a great big steel pot and give it several backbreaking stirs before lifting my serving out. The pork is dry and smoky and completely wonderful. Just a little bit of the house’s vinegar sauce is all you need. And the hash, well, good grief. Edge, who you might recall is the Professor Emeritus of Eating Real Good at Ole Miss, was absolutely right to single this out. It is completely unforgettable. I follow Edge on Twitter. I’d love to follow him around in a car one day. He obviously knows where he’s going to eat.

Another famous fellow who knows about Neal’s is Jamie Oliver, who stopped by overnight during a stop on his six-part series Jamie’s American Road Trip, which aired on Channel 4 in the UK two years ago. When we spoke with the owner, Lynn Neal, she told us about Oliver’s visit, and that the show had not aired in America yet*. Watching the episode in question on YouTube, I’m not surprised. Links to YouTube are always extremely volatile as copyrights are enforced and users delete their accounts, but at present you can start viewing the episode here. It’s fascinating viewing, but the complete opposite of the usual upbeat and fun eye candy that you see on The Food Network that celebrates eating. The show is in equal parts a celebration of regional cooking as it is a sober, harsh, and cerebral exploration of how Americans are handling the recession and Obama’s presidency. The second segment of the episode – it’s uploaded in fifteen-minute chunks – gets pretty heavy with the casual bigotry to be found in both posh Savannah homes and in Chatham County trailer parks. These aren’t roads where Guy Fieri’s camera crew often stops, anyway.

For my part, I really enjoyed the contrast. It’s great fun to watch restaurant owners on Man Vs. Food or whatever talk about their wild recipes at maximum volume, but it’s also compelling viewing to hear Mrs. Neal talk about the difficulty in providing for her staff, before Oliver and the camera crew go back behind the building to see the pitmaster, whose name is Barry, and work with him in getting the hogs cooked.

Before we got home to look up the episode, she told us how Jamie and his production team “borrowed” Barry for a barbecue competition in Lakeland, Florida. She didn’t spoil the episode and tell us how that worked out, but she did say how very well they took care of Barry while he was away and made sure to get him back safe to resume cooking. Damn well that they did. Next time we are out this direction, we are definitely coming back to Neal’s for another pork sandwich and a plate of hash. My desire to try lots of new things sometimes leaves me unwilling to make second visits out of town in favor of exploration, but that won’t be happening the next time I-20 takes us east.

Well, we may need to stop at Heavy’s in Taliaferro County as well as Neal’s, but you get the idea.

(Also, a tip of the hat to Eat it, Atlanta, whose report on Neal’s confirmed for me that they would be open as we drove through! Thanks!)

*Oliver’s series was later scheduled to air in January 2012 on BBC America.

**I never got the chance. Hollis Ribs has since closed.