As I took a nice sip of the root beer at Chattanooga’s Terminal Brewhouse, I kind of had that feeling that I sometimes get that Marie would be a little envious of me once she knew what I was drinking. The thought had occurred to me that I could very well have enjoyed six or seven more pints of their oatmeal stout – it had been a bad week, I was in a lousy mood, and the stout was very, very good – but I decided to be sensible and just follow up the beer with a house-brewed soda. It was magical.

Since David joined me on a trip to Chattanooga in April, we decided to try to come back to town every couple of months. This time, Neal rode with the two of us to see what there was to buy and eat. Based on some rave reviews, I suggested we start with The Terminal Brewhouse, a fantastic operation that has set up in a building across the street from the inexplicably famous and popular Chattanooga Choo-Choo. The appeal of that place has long eluded me, but then again, I’m not taking Centrum Silver quite yet.

The Terminal was once a low-priced companion hotel to the Choo-Choo, offering cheap rooms for business travelers. I can easily imagine some itinerant salesman, like the fellow from Seth’s Clyde Fans, standing out front of the Terminal in the late 1930s. Since the interior has been gutted to make room for the bar, dining rooms and brewing, it is on the other hand pretty tough to imagine what it must have looked like inside when there were actual guest rooms. Despite the historic feel to the building, it is incredibly small, and I suppose there couldn’t have been more than seven or eight guest rooms on each floor, none with a private bath. 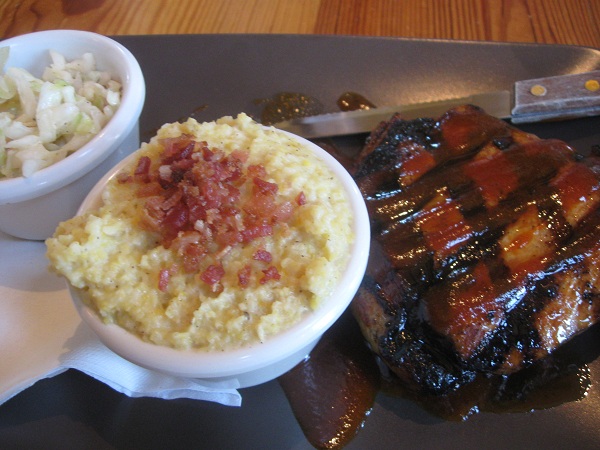 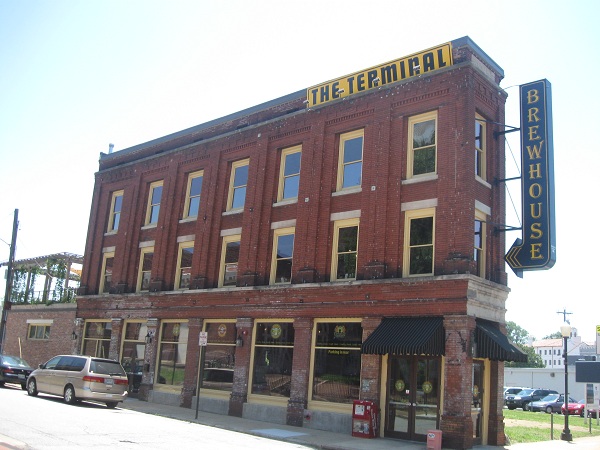 The brewmaster of Chattanooga’s first brewpub is Steve Purdie, and he’s come up with some really delicious beers. Currently, the restaurant is promoting and raving about their White Shadow, which I recall as the name of a TV show that wild horses couldn’t make me watch as a kid. This is a Belgian white that has just a hint of citrus. Neal had a pint of this and pronounced it wonderful. I had the Southsidenstein Stout, which was really special. I don’t know whether I’ve had reason to mention this here before – I do not drink anywhere nearly as much as I used to – but my all-time favorite bottled beer is Samuel Smith’s Oatmeal Stout. I like stouts and porters more than any other beers, and I’m really refreshed most by something heavy like this. I might have had one or two drafts that I enjoyed more than the Southsidenstein, but I can’t think of any right now. I love the tan color of the bubbles. Yes, the beer here should certainly be celebrated. Marie and I will be in Asheville in a couple of weeks; I am scheming to finally take some baby steps into that town’s mighty beer culture and do some celebrating over there.

Oh, yes, we had some food, too. Neal ordered a chicken sandwich called the Frufru, which is unsurprising, as he did inform us once a couple of years ago that he is the queen of fru-fru drinks. This sandwich comes with – are you ready for this? – bacon, brie and pears. He was, again, very taken with his order. David, who drinks neither beer nor soda and was therefore sadly doomed to an inferior meal than Neal and I enjoyed, had the chicken breast, marinated with peach salsa and served with slaw and these really good grits.

I had the same two sides with my pork chop. Honestly, I wasn’t mad about it. It was pretty good, but I found myself wishing that I had ordered the pepper smashed steak, which sounded a lot better in the end. I thought that the slaw – strangely termed Chuck Norris Slaw – was surprisingly mild, but the grits, topped with crumbles of bacon, were very tasty. I’ve been thinking about them for several days.

The root beer reminded me of the wonderful treat that we used to enjoy at Athens’ first brewpub, which sadly did not last for more than a few years. I think that they were called Athens Brewing Company and they were on the Thomas Street side of Washington. I used to always follow up however many pints of stout or porter that I enjoyed there with a glass of the house root beer, too.

Marie agreed that she would have loved to have tried that. It’s a shame something like that would neither last nor travel well, because it was very tasty. She said that she hoped we could visit the Terminal together sometime soon. I’m certainly fine with that; after all, I’m still curious about that pepper smashed steak that I should have tried.

Other blog posts about the Terminal Brewhouse: