(I’ll apologize in advance for the darker-than-normal tone and sad nature of this and the following entry, but new readers and Google surfers might not be aware that the chapters of this blog are fragments of the story of our life based around memorable meals rather than a conventional series of restaurant reviews. I do wish that our very nice trip to the awesome America’s Top Dog could have come at a brighter point in our life, but it worked out that it didn’t. Life’s like that.)

We started the new year with my father in hospice. We didn’t know how long we would be there, and my mother held onto the hope that we would rally back home. Personally, I was telling myself that we would have a week – it turned out to be just over 36 hours – and that our work schedules would not be disrupted quite yet. I don’t know why; I knew that Dad was not coming home, and, as dark as this may seem, I concluded that we were simply going to move operations to the Emory / Oglethorpe University neighborhood for six or seven days. We were going to have to get food somewhere, and that would give us the opportunity to have some more meals in these communities than we normally enjoy. Going out to eat would also bring some welcome breaks into the children’s routines, and the sadness of the hospice and the farewell visits from longtime family friends.

In fact, the last bit of terrific news before my dad went into hospice on the 31st was that my son had decided to move back home and resume school down here with us. While the first couple of weeks of the year have been very sad and awful, I am very glad that we were able to get Dad that one last bit of welcome news before he lost coherence and consciousness. Having my son back has been at least three-quarters fantastic. He’s squabbling with his sister all the time and he’s having difficulty with the concept of keeping his bedroom clean – must have been fairly lax up in Kentucky, I figure – and the teenage stinker has figured that he’s shoehorning his way into a looping day trip through the Carolinas in a few weeks that Marie and I thought that we would be enjoying by ourselves, but my son’s home, and the boy likes to eat.

So giving the family breaks with distracting meals around or on the way to the North Druid Hills corridor were on the agenda. Unfortunately, the first of these, to a faux-Mexican sports bar, was too mediocre to pass muster here. So yes, our last meal of 2010 – otherwise such a good year – was one not worth the effort of recounting, and not merely because the Georgia Bulldogs looked like they wanted to get beat by a high school team playing its first game ever. We would have a much, much better experience at our first meal out in 2011.

In November, I noticed a writeup for a hot dog place in Chamblee that sounded very interesting. It might not have been the best business decision by America’s Top Dog’s owner to open on a very rainy New Year’s Day – for the forty or so minutes we were there, there were no other guests – but I am certainly glad that he did, because a very filling and wonderful meal was exactly what we needed to distract us from going back to the hospice for another day. And this place? Friends, it is a terrific and wonderful treat. It is perhaps not quite the same “local” experience as some of Atlanta’s other hot dog shops – Barker’s and Brandi’s in Cobb County set the standard in the region – but this place sets guests up with the amazing, authentic taste of hot dogs from around the country.

Just six days earlier, I tried onion sauce for the first time down at Orange Tree in Jacksonville. They serve onion sauce here at America’s Top Dogs, along with 39 other options on an unbelievable toppings bar. Incidentally, speaking of Orange Tree in the same sentence as onion sauce, proving that there’s no such thing as a recurring joke so lousy that it can’t recur in the real world, I found myself unwittingly ordering “orange rings” at America’s Top Dog. Hi-hat!

This topping bar will blow your mind. The goal here is to give guests the option of recreating any regional specialty here in Atlanta. If there’s something he’s missed, I can’t think what. The real humdinger, I say, is the presence of proper Cincinnati-style chili that is every bit the equal and equivalent of Gold Star and Skyline. I haven’t tried Gold Star since I was last in Lexington in the spring of 2008, and am no expert in the variation, but it tastes exactly as I remember and occasionally crave the stuff. They do Texas-styled chili as well, of course, but having the milder, cinnamon-and-chocolate-tinged Cincinnati take as well is a really unexpected treat. I’m not aware of any place anywhere around Atlanta that offers this. I had a small bowl of it, rather than dressing my dog with it. Honestly, I kind of missed the pasta that it is traditionally served over, but it was so nice to have another taste of it after more than two years.

As for my dog, I dressed it somewhat traditionally, with mustard – it looks like they have four different ones – and onions, slaw and pickled relish. My daughter surprised me by having two dogs with Texas chili, which she does not normally order on dogs, along with nacho cheese, pickles and, oddly, potato chip crumbs, which was new to me. My son had the most adventurous palate of the table, and made his with Cincy chili, pickled cucumber relish, cole slaw and shredded cheddar cheese. Both kids also had barbecue sauce on their dogs.

Poor Marie, still on a no-nitrate diet, was stuck again with a hamburger, but she didn’t mind as she says that the burger was fantastic. And we were very pleased with the sides. We ordered both a basket of rings and a large order of fries. This was far more than a table of four needed. Both were really excellent – these are surely among the best rings and fries in the Atlanta area – but we were stuck with an awful lot of excellent fries that didn’t keep well and should have been eaten. Bear that in mind as you consider an order for your own party.

We obviously came at an awful time, but it did allow us the chance to hear the owner brag about his hamburgers and his Cincinnati chili, which, he tells us, even Cincy residents proclaim both authentic and superior to some from back home. Eating out on New Year’s Day didn’t give us a feel for what the place should be like, and what the foot traffic should normally be. I kind of had to work to accept the reality that most people don’t go out in the rain on January 1 for a hot dog in a pedestrian-unfriendly location – it’s in the Big Lots strip mall on Chamblee-Tucker Road inside I-285 – and not just think that Saturday at 1 pm, there should be many more people eating lunch out. I choose to imagine that any other Saturday, this place is nice and busy. It certainly should be, and I look forward to seeing the place packed the next time we are back out that way.

(Update 11/17/11): Since writing the above entry, Marie and I went over to America’s Top Dog several times and enjoyed it greatly, especially the Washington, DC-styled half-smokes. Sadly, I went to their second store, in Duluth, earlier today and they no longer carry half-smokes, as their supplier changed their minimum monthly ordering requirements to a number too huge to store, much less sell in a month. Nevertheless, their basic dogs remain one of the city’s best treasures, especially paired with a small order of onion rings. 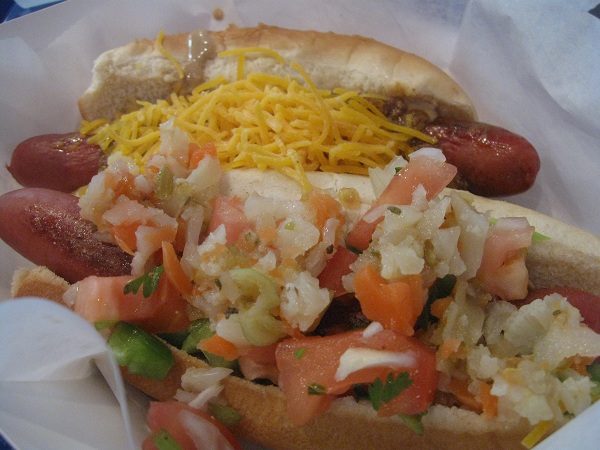 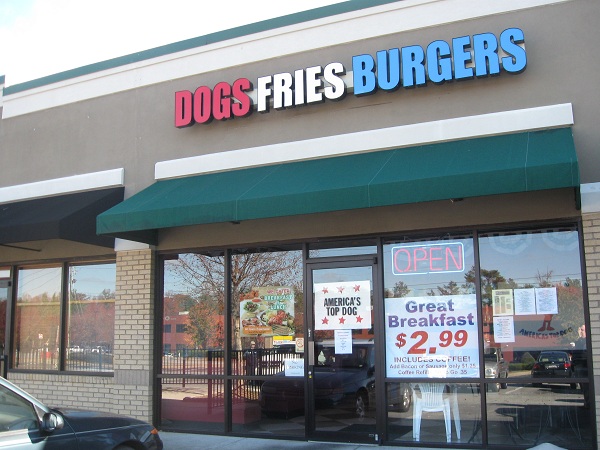 (Update 11/25/11): Strangely and sadly, just eight days after visiting the Duluth store, I can confirm that the original, in Chamblee, has shuttered. Duluth is still going and still awesome, so go check them out!

(Update 1/6/12): Even more sadly, it would now appear that Duluth has closed as well. That’s just awful news. I will miss these guys.