My older son has been largely absent from this blog lately, on account of him, miserably, choosing to live with his mother in the end. But before he went up to Kentucky the first time, he and I had a very neat visit to Trappeze Pub on Washington Street in Athens. The wonderful artist Sergio Aragonés, best known for his work in Mad and his lovable character Groo the Wanderer, was in town to receive an award from UGA’s art school, and our friend Patrick gave us a heads-up that he and some of the other local comic artists and cartoonists were hoping to have a beer with him before the ceremony. So my son and I went to Athens early and were at Bizarro Wuxtry when the call came, and, after getting turned around and not knowing where the heck Trappeze was, we found the group, met some new acquaintances and enjoyed Sergio’s company. I had a beer and asked for a Sprite for my son, joking that he was my designated driver.

I still think that my son missed a trick, when Sergio asked him whether kids his age still actually buy comics, not replying, “Well, I bought that hundred dollar collection Mad put out of Don Martin’s stuff, so some of us do, and when the heck are they gonna give you some big hardcovers like those?” but my son, apparently thinking that all of Mad‘s artists are ultra-competitive death warriors who begrudge each other even the slightest acclaim or success, later whined that he would never have said such a thing, for fear of offending Sergio. But it was a terrific day – heck, I got to meet Jack Davis at the ceremony, too! – and I’ll always treasure what Julian said to Marie when he phoned to let her know we were on our way home. He said “Dad had a beer with Sergio Aragonés! And I had a Sprite!”

Perfect days like that completely envelope restaurants. As I’ve often said, the number one ingredient in elevating a restaurant to greatness is neither the food nor the service, but nostalgia. Just knowing that something wonderful happened somewhere can turn a good restaurant into a wonderful one. Trappeze Pub is indeed a good restaurant, and a quick lunch here that allowed me to remember that happy time with my rotten kid is a pleasure. That the food is pretty nice is just a bonus. 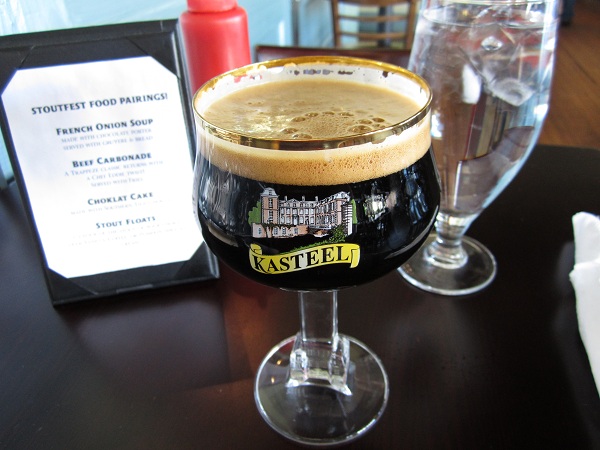 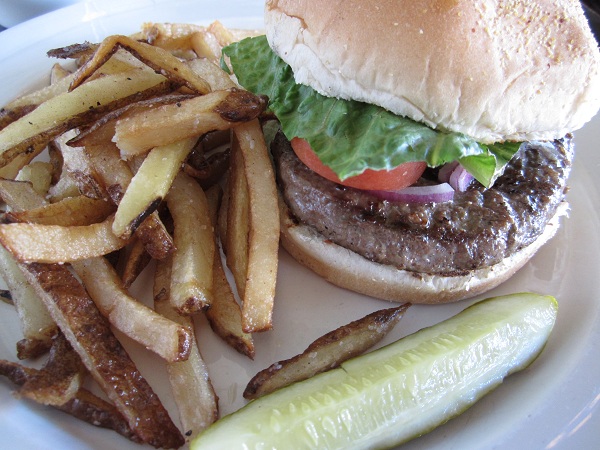 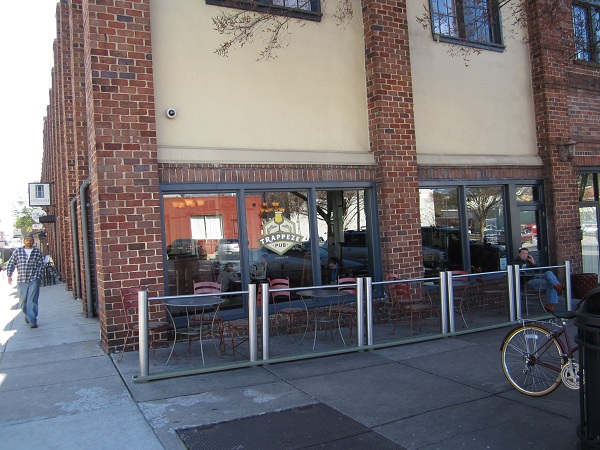 Trappeze was actually on my itinerary for my next trip to town. I had intended to get lunch somewhere else on Washington on this jaunt, but the darn place decided to inconvenience me by not having any lunchtime hours in December. So, already parked on Washington in the coin meter slots – Athens has begun installing receipt parking on other streets, allowing commuters to move their cars should they pay and find that they need to alter their plans, but they haven’t made it over to this road yet – I figured that I might as well grab a beer here.

Trappeze has an excellent reputation as one of the country’s best beer bars. It has been named in the top hundred in two different national magazines, and they certainly have a stunning beer list. I went with a pint of the locally-brewed Terrapin Wake-n-Bake Imperial Stout. I believe that I have confessed to my readers that I am much more of a lightweight than I once was. High-gravity beers like this keep me away from the steering wheel for an hour after a single pint. I may be dumb, but I’m not stupid. Perhaps the real tragedy is that I came on the Thursday morning; the following evening, they had a special event where they tapped a cask of this stout which had more than a pound of spiced bacon added to it. That sounds vaguely ridiculous, but they do it every year and have a blast, so I suppose that I should try it sometime, just to horrify my beer-and-bacon-phobic wife.

Much as I enjoyed the stout, most of the food was just okay. Since I was having a beer instead of a glass of water, as I normally do, I opted for the less expensive diner burger. My server suggested that the $11 pub burger, made with better, all-natural beef, was certainly the better of the two, but the wallet reminded me that I planned to make two other stops in town, and that I had funnybooks to buy down the road. This was actually a second choice; I recalled that a reviewer at Urbanspoon had recommended a roast beef sandwich, which was not on the present menu. Well, the beer was terrific and the burger was okay, but the amazing fries, cooked with rosemary and garlic, were what sold the place for me. I could have eaten more than anybody’s share of these. Honestly, for an evening sampling wonderful beers from around the world, a big order of these and some of their boiled peanuts would be mighty fine.

As I stood to leave, lightweight me was instantly reminded that an evening sampling those beers would not be a very lengthy evening. The coin meter was full and I needed the exercise anyway; I walked to the comic shop.

Other blog posts about Trappeze: