For this month’s attempt to expand my novice beer knowledge, a trip to Ale Yeah! in Roswell had my brother putting two bottles from Wild Heaven in my hands. He told me that these were local guys with a very small selection of beers. That sounded good, because it’s easier to get a handle on a brewery’s output when I don’t have sixty-eleven beers to track down, as will be the case with next month’s chapter about beer.

In the case of Wild Heaven – and if a similar-named song by R.E.M. from Out of Time hasn’t been running through your head for the last several seconds, please, please share your secret with me – it’s a little more complicated than that, as they have two beers in bottles and a couple of others that are only available on tap. The business was founded by two fellows whom I did not know, although I am happily familiar with some of their previous work. Nick Purdy founded Paste, an Atlanta-based music and culture magazine, which I’ve read and enjoyed from time to time, and Eric Johnson started up the excellent Trappeze Pub in Athens in 2007. Johnson came on board as brewmaster, and they launched their first two bottled offerings in September 2010.

For the last few years, Wild Heaven has been brewed and bottled to Purdy’s and Johnson’s specs at a facility in South Carolina (Thomas Creek of Greenville, apparently), but they have been working hard to get a local brewery up and running. Last month, they announced that they completed full funding for this new facility, and they hope that it will finally open in early 2014. 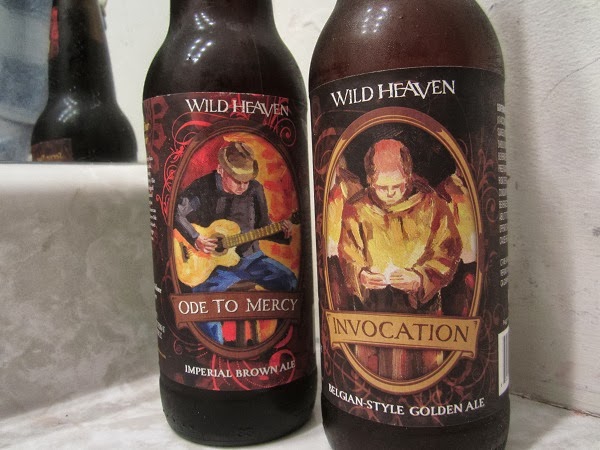 I brought home their two bottled offerings and enjoyed them both.

Invocation Belgian-Style Golden Ale: I had this one first, anticipating, wrongly, that I’d prefer the other one, because I like to finish on a high note. No, while both are very good beers, this was the better of the two by a long way. Belgian-style golden ales are also referred to as strong pale ales, with a higher ABV, in this case 8.5%. I never thought that I’d pay much attention to that number, but, lightweight that I am, I could definitely feel it. It has a really strong, rich, fruity and sugary taste, a very good, natural sweetness finishing with a little spice. It’s just a downright terrific beer that I look forward to sampling many more times.

Ode to Mercy Imperial Brown Ale: I also would not mind at all having a few more bottles of this. It’s great, and I’m enjoying the experience of my palate learning more about the different balances of malt and hops. There are lots of competing, complementary flavors here, predominantly caramel and coffee, but the malt is very strong and the hops are little accentuating pinpricks of emphasis along the way. This paired terrifically well with a nice dish of pasta and ground sausage with a spicy sauce of tomatoes, olives, and capers, by the way. I can certainly recommend that.

In addition to these, they have two additional selections that are not available in traditional bottles, but on tap and, in some locations, in growlers. Eschaton was released in September 2011. It’s a quadrupel ale in which, instead of the extra sugars that are normally added to this very strong type of beer, oak chips that have been soaked in Pinot Noir are added during the fermentation. Let There Be Light is the second tap-only offering, a year-round light beer (only 4.7% ABV) that was introduced in 2012. There’s also an Ode to Mercy Special Winter Ale that is only available for a few months. You may be able to catch that very soon at a good bar or tavern in your area!

Next month, one brewery, more than any other, rekindled my interest in excellent craft beer. That’s Bell’s of Kalamazoo, Michigan, and while they have far more varieties in their portfolio than I can sample, I’ll tell you about a few of them.