A couple of weeks ago, I wrote about a date night that initially served as our anniversary, because we were not certain we’d get any time to ourselves on the actual date that we tied the knot. Well, fortune moved its huge hand and we did indeed get just about a whole day to play. We started just after the lunch rush at Burnt Fork BBQ in Decatur. It had been on my to-do list longer than any other barbecue place in the Atlanta area, so we drove over here.

This actually worked out brilliantly, as I got to save my boss a trip to Decatur to pick up some things from Little Shop of Stories, a genuinely terrific children’s bookshop. Since parking is always difficult during the weekday, we figured Marie would drop me off and circle around while I grabbed the package. Then she lucked into an astonishingly good parking space. Heck, if we’d have known that was going to happen, we’d probably have eaten at Brick Store Pub.

But that was after we had lunch at Burnt Fork, which is serving up some pretty good barbecue with some very good sauces, but this is one slow kitchen. It’s not fair to say that the service was unhurried, because our poor server, handling a mercifully thin dining room, was rushing madly whenever anything came up. Man alive, that was the slowest kitchen I’ve ever seen. The people who came in behind us – not that there were many of them – waited upward of fifteen minutes for their lunches. 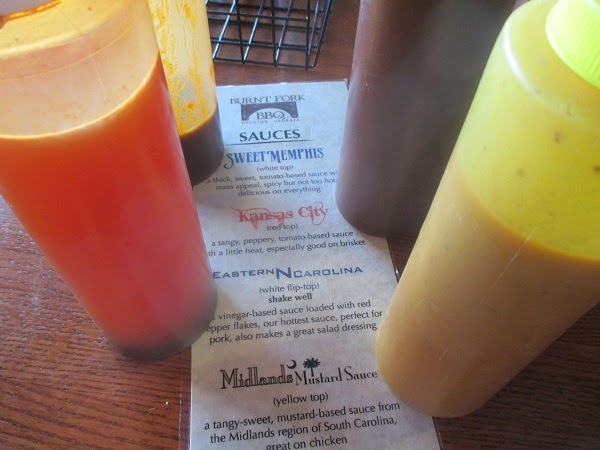 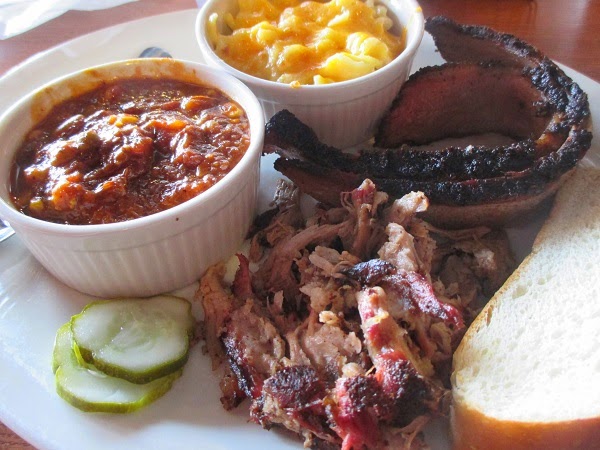 My experience was somewhat unlike Dustin of the Georgia Barbecue Hunt (linked below). I enjoyed the brisket a little more than he did, and enjoyed the pulled pork a little less than he did. The meat is smoked over charcoal pellets in a Cook Shack smoker and it doesn’t taste very smoky at all. Not bad, but I would not agree that it’s a standout for the area or worth a cross-town trip. I enjoyed a little of the medium-spicy Kansas City sauce on the brisket, and the vinegary eastern NC sauce on the pork.

I really do like their interesting desire to please everybody. In lots of older barbecue restaurants, this means serving up hamburgers or seafood or hot dogs. Here, they figure that if you don’t want barbecued meat, you’re here for vegetables or tofu. The menu is divided into meaty, vegetarian, and vegan sections, and they really pay as much attention to the sides as they do the main course. The mac and cheese was simply amazing, and the Brunswick stew was incredibly flavorful, without any fillers. Josh Kramer and his wife Kara Ferris, who named the restaurant after an old creek that used to provide water to Decatur, are doing a good job and I admire their work at getting their food from local producers. The beef, for example, comes from Moonshine Meats. 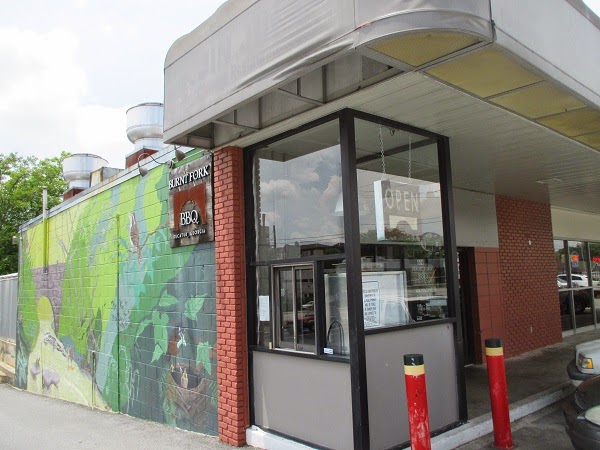 I also like how their interest in sourcing local ingredients carries over into their beer list. The only national brand beer that they had to offer when we visited was PBR. Otherwise, they were selling only Georgian beers, including selections from Monday Night, Red Hare, Sweetwater, Terrapin, and Wild Heaven, which is a terrific idea and I will happily point out any restaurant that I see doing this. It was not a bad lunch at all. I won’t say that I love the place, but I like it just fine.