A few Sundays back, Marie and the three year-old and I joined Marilyn from Atlanta etc. for a quite nice little vegetarian supper at a surprisingly old and venerable restaurant. Jerusalem Bakery opened in 1973 and while I’m not certain whether they’ve been in this location the entire time, neither were two of the employees that I asked. It is in the same strip mall as Tasty China, at the intersection of Franklin Road and the South Loop, although not a couple of doors down like I thought it was (sorry, Marilyn), but rather behind and beneath Tasty China. There’s a whole ‘nuther plaza of shops around back, invisible from the South Loop.

As you may guess from the name, Jerusalem Bakery specializes not only in Mediterranean cuisine, but also has a separate sales room where they sell quite a variety of breads. In the restaurant, which is a simple walk-up counter with more than a dozen fast-food booths stretching to the back, they’re best known for their falafels and salads. 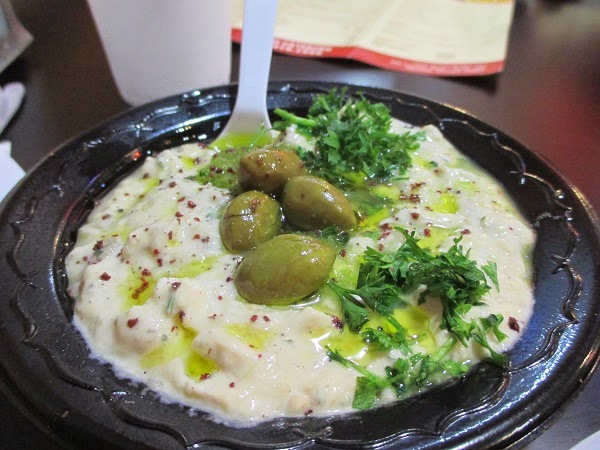 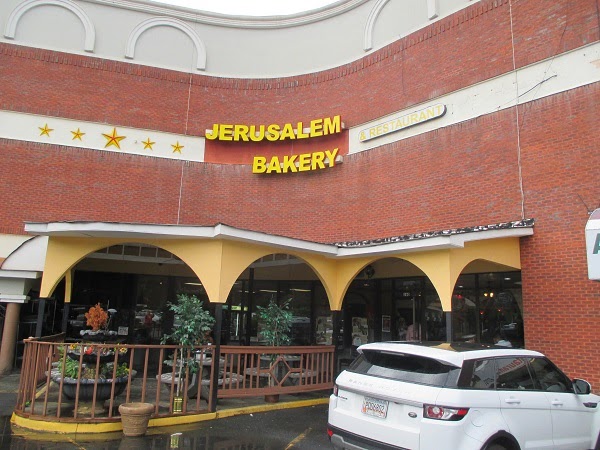 The food was all good, but we were absolutely baffled by the portions. Pictured above is a side of baba ghanoush, which was quite nice and creamy, and sells for four bucks. Marie and I had figured that we’d order their falafel combo meal ($8) and get a Jerusalem salad as its side, and also the baba ghanoush and a tabbouleh salad ($6). The gentleman at the counter said that, despite what it stated on the menu, Jerusalem salad was not available as a side for the combo. Well, that was no matter, I’d just have the tabbouleh salad as that side. The price was exactly the same either way.

I really should have photographed everything side by side so you can see how bizarre it was. The $6 Jerusalem salad was served on a tiny little paper plate saucer and had about five bites of food on it. The tabbouleh salad that came with the combo was in a bowl so large that I could have worn it on my head and gone to work with Bob the Builder.

We briefly enjoyed discussing the strangeness of the experience, and then talk of what we’d been up to lately revealed that Marilyn and Marie share an interest in canning. They had lots to talk about. Lots. (As my daughter put it about a week later, “There are 48 jars of jam in this pantry, Dad. FORTY-EIGHT! When are we ever going to eat this much jam?!”) Not even the unwelcome intrusion of some drunken idiot, stumbling into Jerusalem Bakery and being offensive and vulgar to one of the staff, could quell their enthusiasm for sharing canning recipes and ideas. The dimwit set my danger alarms going, but didn’t detract from their fun conversation. (Here’s Marilyn’s story about the place, by the way.)