A few Saturdays ago, I took my son out to west Cobb to look for the long-rumored second location of Sam’s BBQ. I had heard that it was out here somewhere, but had never spotted it whenever I was driving around this area. It turns out that the restaurant has absolutely no street visibility at all. If you can find The Avenues at West Cobb (home of Otter’s Chicken), then Sam’s is literally across the street in a shopping mall with a Kroger and a Belk, but you cannot see it from GA-120.

Sam, of course, is Sam Huff, who, a decade ago, began to turn Atlanta-area barbecue upside down and give it a good shake. Teamed with Dave Poe, whom he befriended on the competition circuit, he opened the first Sam & Dave’s BBQ store, emphasizing pink pulled pork smoked in a big Southern Pride, and succulent, fatty brisket. Atlanta, the home of chopped brown pork and thick, sweet sauces, didn’t know what hit it. By the time Sam and Dave said their amicable goodbyes and split their stores, they had kickstarted a sea change in the suburbs just as the Fox Brothers had done so in the city. Almost all of the excellent barbecue joints that have opened in their wake have either done so with former Sam and Dave employees in charge (such as Grand Champion, which everybody enjoys more than I do, and Community Q, which I enjoy even more than everyone else), or with Huff / Poe / Fox techniques in mind.

We live an equal distance between the two Sam’s stores, but closer to Dave Poe’s than either of them, so I’ve had more meals there. I’ve mentioned before that the guest experience at either Sam’s or Dave’s is nearly identical, and always excellent, but one tiny thing that Sam’s has above Dave’s is that you can also get a mustard-based barbecue sauce from him, which is just amazingly good and downright perfect on the pulled pork. Strangely, though, they don’t have that at the West Cobb store. They just have mustard. 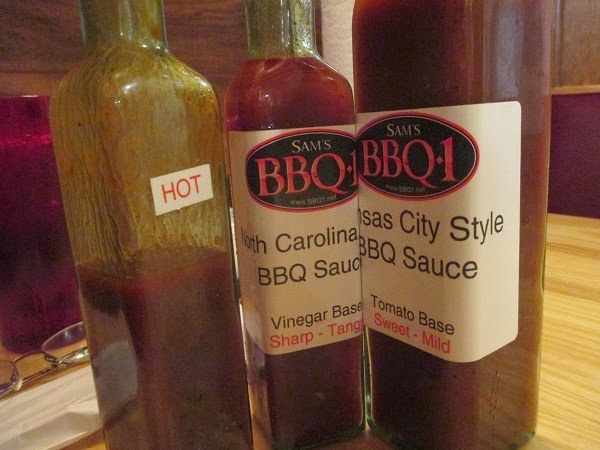 In a really bizarre misunderstanding, after the server told me about the three table sauces, I told her that I had been to the other Sam’s location and really enjoyed the mustard sauce there. “Oh, I’ll bring you some,” she said, and returned with a two ounce cup of plain yellow mustard. Erm…

Other than this bizarre miscommunication, everything about the meal and the service was quite wonderful! She doted on my boy, who asked for a pulled chicken slider and tater tots. I had a pulled pork plate with Brunswick stew and spicy baked beans and enjoyed it all so much. The pulled pork doesn’t need sauce, which is one of the big changes that Huff and his peers brought to Atlanta’s barbecue tradition, where, often, sauce is ladled over the pork before it is served. Three are available. The St. Louis sauce is sweet and mild, and the Carolina sauce is vinegar-based with a little tomato, much like a Lexington-style. Of the two, I think that the St. Louis sauce goes better with the pulled pork. I think that Lexington-style doesn’t go quite as well with pulled pork that has this texture as it does the chopped barbecue from the Piedmont. There’s also a hot sauce that I like mixed with the St. Louis. Most of the meat, however, I ate and enjoyed without sauce at all. 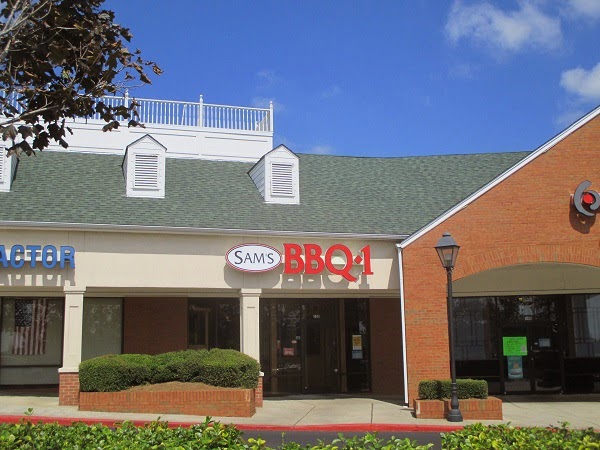 Sauce remains a bone of contention with my three year-old. I poured a small amount of St. Louis sauce onto his butcher’s tray, “just in case” he wanted to dip his tots, his chicken, or his bread in. He made “ewwww!” noises and was briefly aggravated that I’d sullied his tray with the strange brown stuff. Every couple of minutes, I’d dip a small piece of my Texas toast in the sauce, or a forkful of pork. Then I took one of his tots for a dip. Eventually, he worked up the courage and smeared a tot through the sauce. “Mmmmmm, not bad!” he half-shouted, using a phrase that we think that he picked up from his Oma. I explained how there are so many different varieties of barbecue sauces out there, and, later in the evening, we met Marie after work and visited Old Brick Pit in Chamblee, where he got to taste their very tangy tomato-based sauce.

Some years ago, I heard that Sam wanted to open a location out here because this is where he lives, near the Lost Mountain community. You can’t begrudge a fellow wanting a short commute a couple of days a week, but I do hope that one day, he’ll open a store inside the perimeter. I think there’s a huge crowd of potential customers down there who never get this far into the suburbs and who would do well to try this great barbecue. Until then, y’all gas up and come try this place; it’s so good.

Coincidentally, both Sam and I are quoted in a story by Todd Brock in this week’s Creative Loafing called Is There an Atlanta Barbecue? which you should read. Scroll around and read the whole 2014 Food Issue. Everybody did a great job with it.