In today’s chapter, the tragic story of a traveler not eating what he intended to eat.

I made terrific time from Manning to Orangeburg, because I-95 connects the two towns. Once upon a time, US-301 had crossed over Lake Marion as a high two-lane bridge, but when the interstate was built, they rerouted 301’s traffic between the cities onto it, and the pair of new bridges, two lanes north and two lanes south that were newly built. The old bridge is now a pedestrian fishing pier, and Lake Marion is itself quite beautiful.

I was delayed in Orangeburg and had to take a detour because of a problem with a train. It slowly came to a dead stop in the center of town and then began inching its way in reverse. Several other drivers peeled off and made their way through back streets around the train. I followed them into Orangeburg’s fantastic old downtown. I have never visited Charleston, but this city looks a lot like a smaller version of how I have always pictured Charleston. This is where, 63 years ago, James C. and Elizabeth Sykes opened a Dairy Queen. Five months later, they decided they could make better profits on their own, free of the burdensome franchise agreement. The new Dairy O was relaunched in early 1950.

For thirty-four years, it was a classic walk-up dairy bar, but in 1984, the Sykes family elected to expand the store into a traditional fast food joint. Sadly, for those of us who love old restaurant design, they ran the new store through the bland machine and made it look as undistinctive and dull as possible. The exterior totally belies how nice the people are, and how good, for fast food, the meals are.

I added this restaurant to my to-do list many, many months ago after hearing about their pimento cheeseburger. It’s named the Curly Burger and it is so popular in this area that, a few years ago, its supporters made a spirited, albeit unsuccessful, attempt to have the Curly Burger recognized as the official sandwich of South Carolina. I really wish that I could tell you how it compares to the amazing pimento cheeseburgers at Greenville’s Northgate, or Columbia’s Kingsman, but I plum forgot to order one. 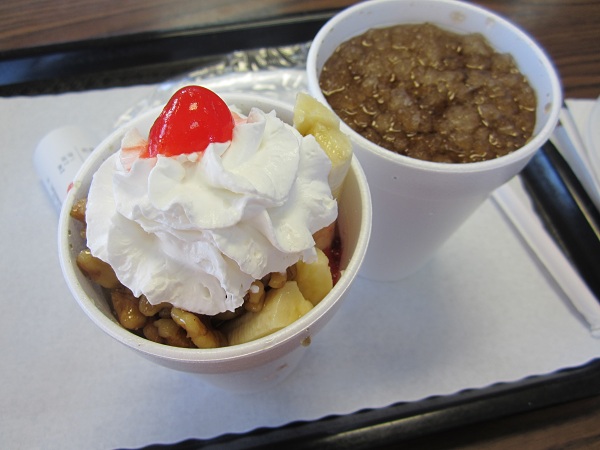 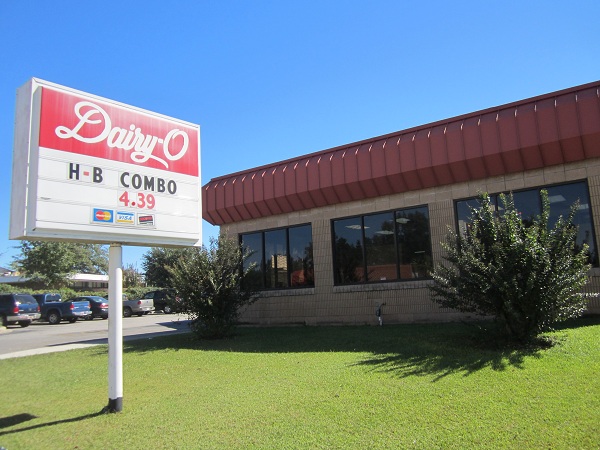 I won’t bore you with the details – I’m long-winded enough – but basically, between noting this restaurant ages ago and plucking it from the wishlist when, months later, I charted a path through Orangeburg on my circumnavigation, saying “aha! There’s a place in this town that I want to try,” I forgot why I wanted to try it. Boy, is that ever a whiny, entitled first world problem. I enjoyed a terrific little banana split in a cup for almost no money at all – just $2.40 – and then, upon reading of the Curly Burger in a newspaper story on the wall, slapped myself in the forehead for not having a hamburger.

I took solace in the hope that, perhaps in late 2013, we might relocate to Asheville and, if so, we’ll be taking I-26 down this direction to visit Marie’s family in south Georgia. There will be plenty more chances to enjoy a Curly Burger and a banana split. 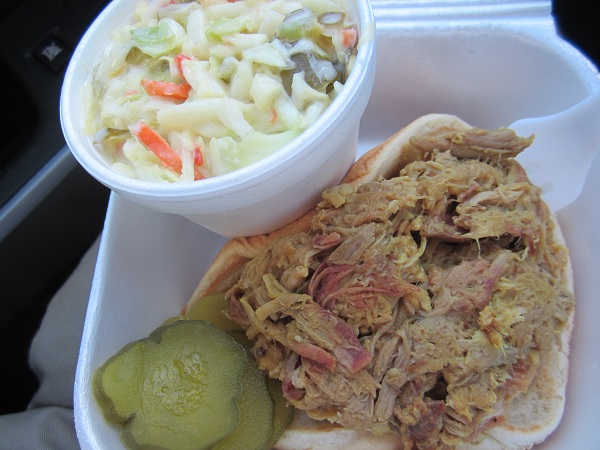 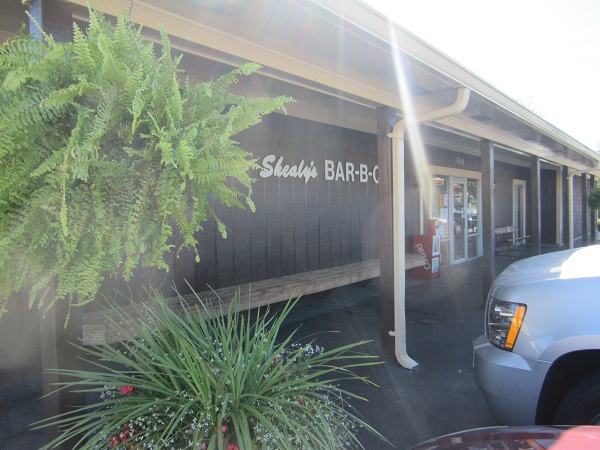 I got back on the road and made good time up US-178. I was distracted briefly around the town of North. There’s an Air Force base there, and two VTOL jets were on practice maneuvers. It’s impossible not to slow down and stare with your jaw dropped open when you see those things hanging in the sky. I continued northeast across I-20 and into the twin towns of Batesburg and Leesville, which combined into one municipality in 1992.

The popular Shealy’s Bar-B-Que, another one of the state’s barbecue buffet restaurants, opened here in 1969. It’s a friendly rival to the equally well-known Jackie Hite’s. I figured that I wouldn’t realistically have a chance to visit both on one trip, so I tossed a coin and settled on Shealy’s, promising myself that I will visit the other when we come to Columbia in early 2013 for a family vacation. Now that I know more about the buffet tradition, we will sit down for that and experience that the way it’s intended, rather than just getting a sandwich.

To just get a sandwich, or any carry-out order, guests at Shealy’s must go around to the large side entrance, where there’s a counter operation that, on its own, seems to do the business of any three other restaurants. You can order everything from sandwiches or bottles of their popular mustard-based sauce – the bottling plant is in the building next door – to sides from the buffet, including their hash and rice or the very popular and curious-sounding catfish stew. I really should have ordered a bowl of that.

My expectations had been lowered by the subpar buffets that I had visited already, but darned if I didn’t save the best of them for last. I’m not even a fan of presauced pork, but this was completely delicious. I also liked the slaw, with its pickles and vinegary tang. It’s certainly true that I didn’t give Shealy’s the detail that a business so old and so successful demands, but on the other hand, I feel comfortable telling readers that what I tried was really good, and it leaves me curious to try it again one day. But there wasn’t time to linger; I had three more stops to make before getting on the road for home, and, madly, I decided to make it four. In the next chapter, I’ll share how things wrapped up.

Other blog posts about Shealy’s: