So, at last, we come to the close to the story about my South Carolina trip. About 800 miles in two days, but there were still a few stops to make. The first two were in the town of Greenwood, home of Lander University. Only the second stop was planned; the first was irresistible.

In an earlier chapter of this story, I complained about my inflexibility when it comes to changing plans at the sight of something interesting, and vowed that I’d do better. My destination in Greenwood was an old fast food joint called the Dixie Drive-In, which opened in 1959 and was said to make a fine burger. But then I saw a remarkably wonderful and weather-beaten sign for a place called Smokey Joe’s. I turned around, photographed the sign, had a lovely conversation with the sweet lady who was manning the window, had two bites of a sandwich that I did not enjoy in the slightest, threw the rest out, and moved on up the road. 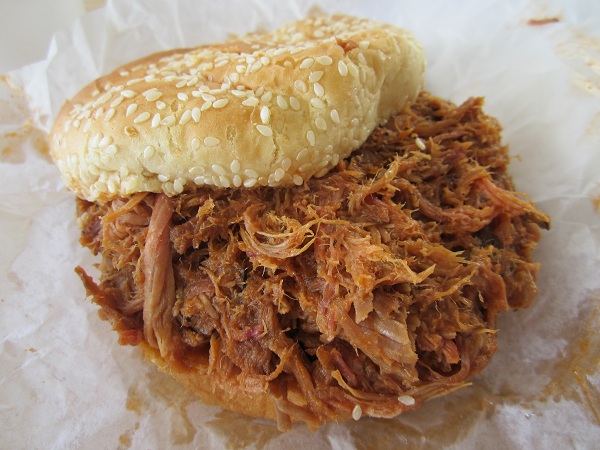 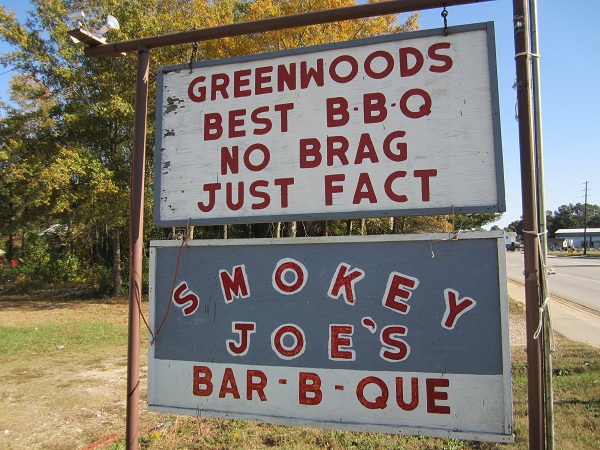 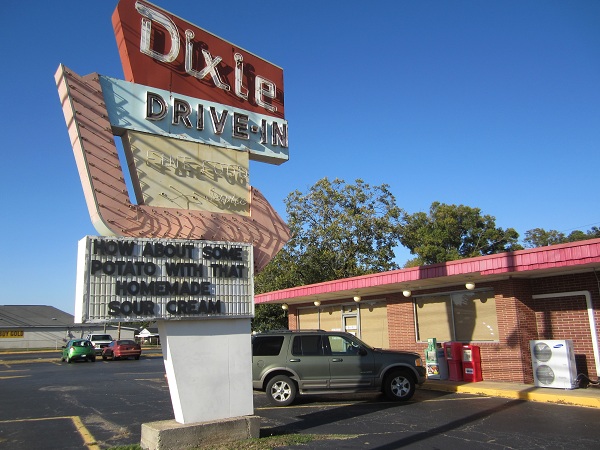 I had a much better experience at the Dixie Drive-In. Had I attended Lander, I would have eaten here all the blessed time. I had an absolutely fine fast food-style burger and fries, joining several locals at one of the two wrap-around counters. It’s a great place that looks like it has spent the last sixty years wrapped in plastic to keep it from aging and deteriorating. The building faces west, and every evening, as the sun begins its long arc, they have to pull down the blinds. I still had another town to visit, forty-some miles north, and a lot of driving to get home, so I got moving.

I was delayed in Belton by a big road closure for a carnival, and the good folk there didn’t do a good job putting up detour signs. I figured it out eventually and made it to Anderson around six. I found the Pompous Pig on the main commercial artery between the old downtown and the interstate, not far from the A&W where I stopped back in June to try those fool cheese curds.

Kim Newman, an Anderson native, and her husband Chet opened the Pompous Pig in November 2008 after several wins on the touring competition circuit. Their restaurant is a big success despite its hidden, back-of-a-strip mall location and, on this Friday evening, it got full right behind me. They have a small room that’s reserved for parties or, in the case of the orange-and-purple group that came in, big Clemson families getting together for a night-before-the-game tailgate. 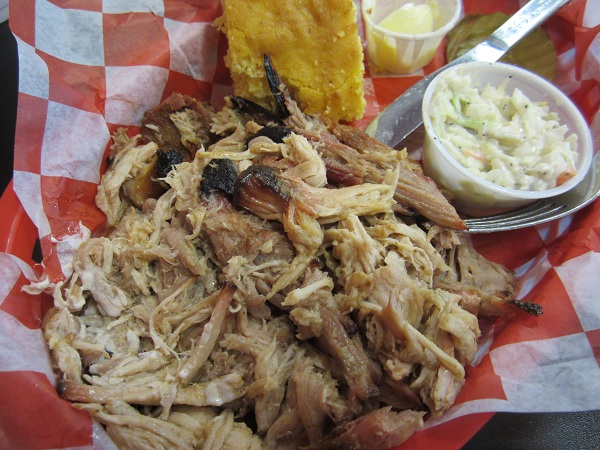 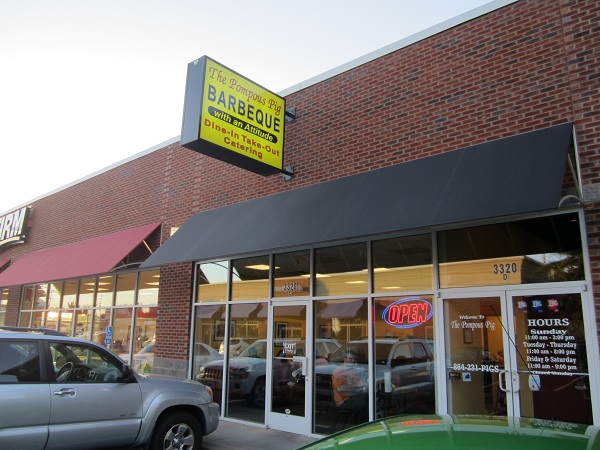 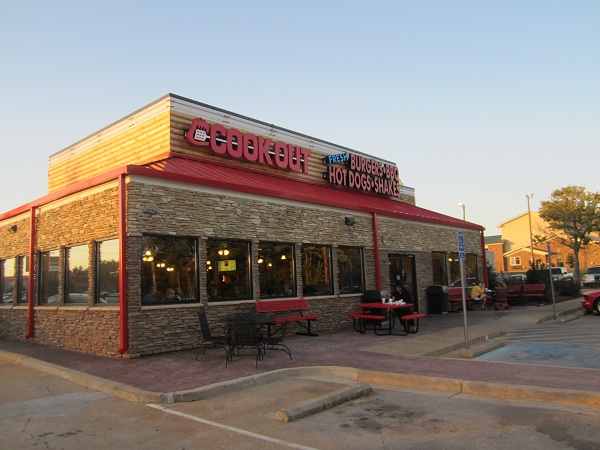 So, this was my final meal of the twelve barbecue joints that I visited, and I’d give it the bronze medal. I enjoyed Scott’s and Smoking Pig more, but this would be a fine stop in any state. They do everything from pulled pork to chopped chicken, or beef brisket, St. Louis-style ribs, sausages, they smoke everything here. The pork was a little greasier than I like it, but I wouldn’t complain. They also have more sauces than any other place I saw all weekend: seven. These are hot and mild tomato-based, Alabama-style white, hot and apple cider vinegar, mustard, and Kansas City sweet. I enjoyed the hot vinegar most, and thought the white sauce needed a little pepper. I’d have loved to have jawed a little with the staff, but the line was out the door as I left.

I had one final stop to make before getting on the interstate. Cook Out, which is based in North Carolina, has continued its expansion into both eastern Tennessee and the Palmetto State, I knew that I wanted my last stop to be here, for a milkshake. They have about thirty flavors available at any given time, plus a host of monthly specials. I certainly wasn’t hungry anymore, but there’s nothing like having an orange push-up flavored milkshake to sip for a long ride home. WSBF, Clemson’s student radio station at 88.1 FM, can be relied upon for excellent regular rotation. Unfortunately, I caught them as they were playing track after track of Misfits covers, none a patch on the originals, to get ready for Halloween. Ah, well, this is what iPods are for.

I was glad to get home, as I missed Marie and the kids, and I needed a good night’s sleep, because we had another big day of driving and walking and enjoying barbecue ahead of us. More on that in the next chapter!

That finishes up this tour of South Carolina. We hope to be back in Leesville-Batesburg and Columbia, which we’ve never properly explored, in February. I’m considering another circumnavigation of Alabama, reaching down into the Dothan corner, which I missed last time, instead of going to Mobile, but haven’t decided yet. Before any of that, though, we’ve got a trip to Nashville on the agenda, and a several day-long visit to a few places in the Buckeye State. The next two months will be very, very busy. Hopefully, we’ll have time to tell you about what we are doing!