I was running a little ahead of schedule as I made my way out of Florence, having enjoyed myself a great deal. Good thing, too, because I had an idea that I might enjoy a little leg-stretching and would need the minutes. My next destination was Dub’s Burgers in the town of Athens, and I found that there was a classic dairy bar just a tenth of a mile’s walk away. I figured that a quick counter meal at Dub’s and a walk to Kreme Delite and back wouldn’t take forty minutes, and then I could get on to my next destination and walk around the parking lot a few times before meeting with friends. This would not work out quite right.

In my planning, I did not factor in one little important note about Dub’s: it is one of the most incredibly busy and popular places that I’ve visited in I don’t know how long. I arrived at 11.20 in the morning and the lunch rush was already roaring. I grabbed the only counter seat left and settled in for an incredibly long wait. No disrespect to the staff; they were grilling these incredibly odd burgers just as fast as they could, but it takes a good while to cook the forty-something burgers ahead of me.

Dub Greenhaw and his wife Edna opened this little place in an eyesore shopping center just south of the downtown square in 1961. They sold it to Dub’s nephews Herb and Jimmy in 1983. Herb retired and Jimmy later sold it to his son Lanier in 2006. For a long time, Jimmy Greenhaw owned both Dub’s and the Kreme Delite. Jimmy had purchased the dairy bar in 1987 and then sold it to Josh Tarokh in 2010. Still, the two old institutions remain friendly. They split the cost of ordering paper bags from their supplier by having the bags branded with the names of both restaurants.

In the 1980s, incidentally, Dub’s had a second location a few blocks away. In 1989, a locally-produced TV show called Country Rover did a very short segment here – you can watch it on YouTube – and I was momentarily confused when I pulled into the crummy strip mall, not realizing that this was the original restaurant, and the other location that I saw in the segment a shorter-lived cousin.

I ordered a burger with lettuce, tomato and mayo and a side of onion rings and settled in for what turned out to be a half-hour wait. My server gave me the onion rings after just a couple of minutes. They’re just frozen food service rings, fried to order. I ate a couple and decided to wait for my burger for the rest. When the burger was finally ready, the remaining onion rings were cold. Well, I didn’t need the calories, anyway. 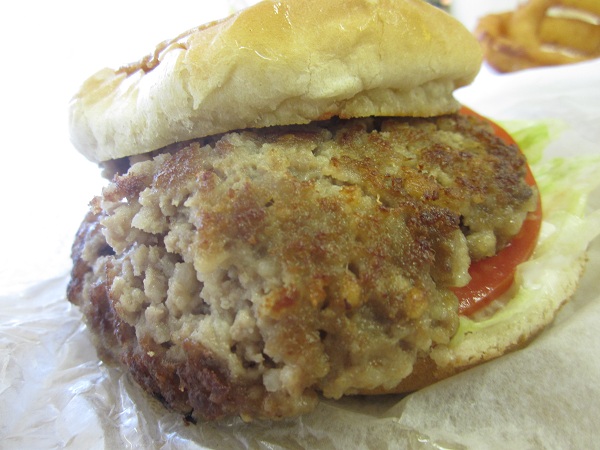 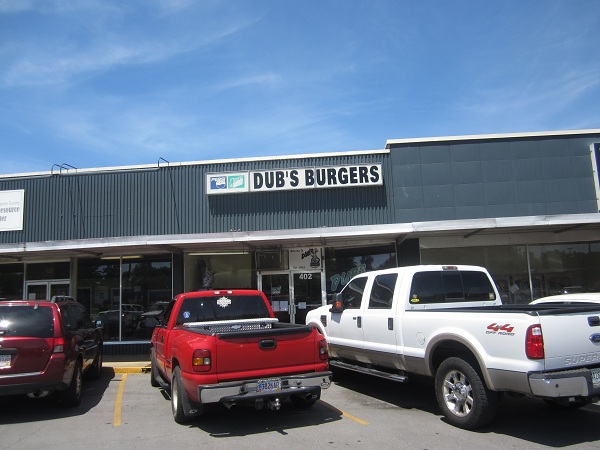 The honest fact is that this is one of the oddest burgers that I’ve ever tasted. My server was patient and apologetic about my long wait, and just as polite and friendly as she could be, but she would not be drawn out into a discussion of what’s actually in the patty. I believe that, like the slugburger that I enjoyed the day before, the beef has been extended with something, possibly bread and onions, but I couldn’t say for sure. I would not call this delicious, but I’ll definitely call it curious. It was certainly a whole lot better than the crispy slugburger in Mississippi, whatever had been used to extend it. I’d like to try another one day, if the experience doesn’t also include another thirty minute wait.

The long visit meant that I needed to waste no time, and so I drove up the hill to the Kreme Delite, ordered a grape milkshake, took about twenty photos while the girl made it, and left town at top speed. 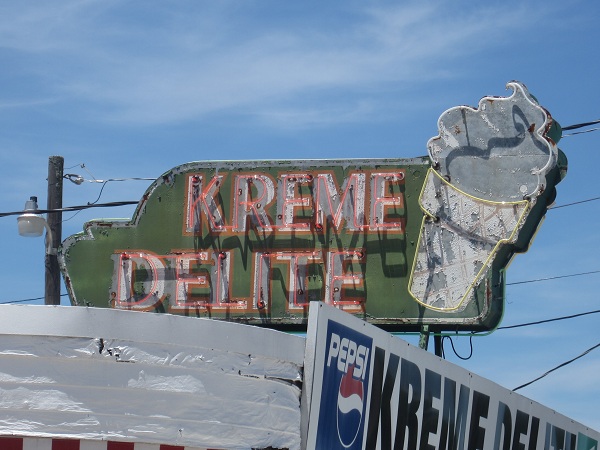 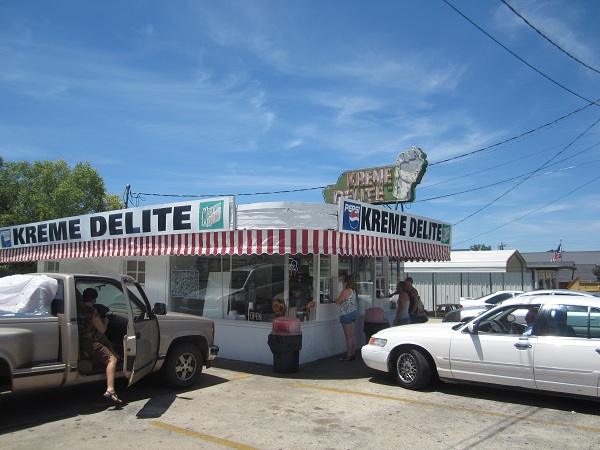 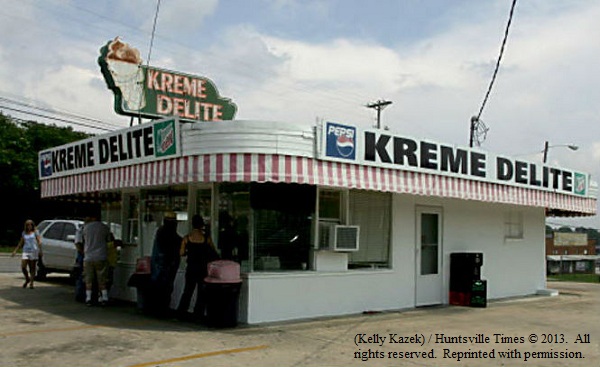 As mentioned in the previous story, I had an SD card failure on this trip, and only a small handful of the photos that I took made it home. Since I completely love old dairy bar buildings, I was having a ball taking pictures of it, and this was so heartbreaking. I dropped a line to Kelly Kazek, who wrote a story about Kreme Delite and other places in the region a couple of months ago for the Huntsville Times and asked to borrow one of her pictures so that my report looked a little better.

Grape shakes. This must be an Alabama thing. When I’ve written about Kay’s / Kay’s Kastles / Ice Castle, I’ve mentioned how my mother, who was raised in Fort Payne, loved their grape ice cream. I noticed that Bowen Dairy Bar in nearby Henegar also made grape milkshakes, as does the Tasty Dip in Heflin. It looked like the girl at the Kreme Delite poured some grape syrup or grape juice from a small clear pitcher into the cup as she made my dessert.

I didn’t ask for specifics. There’s a terrific dairy bar in Georgia between Gainesville and Cleveland called the Dari Spot, and I ruined the mystery when I observed that they make their orange milkshakes from vanilla ice cream and a bottle of Fanta. Some things deserve to remain a secret.