Because when I’m on a circumnavigation I am constantly racing against the clock, it is very difficult to actually schedule time to meet with anybody. Any time I can shave a few minutes here or there, the better! However, since this trip would be taking me into the Huntsville metro area, where our friends Vincent and Helen live, I wanted to make certain that we could break some bread together. Finding the right place would be a little challenging.

Now, my friends certainly know great food, and love some barbecue, and share my tastes and opinions on many places. They’re a little jaded where barbecue in the Huntsville area is concerned. They’re not impressed with all those joints run by various members of the Gibson family – I rather enjoyed Little Paul’s myself, a year and a bit back – or the local chain of Lawler’s. One of the better-known barbecue restaurants in town is one that we almost visited last year instead of Little Paul’s. Helen was glad that we didn’t. She described it as “one of those places you end up at every ten years or so because you forgot how bad it was.”

Taking the opposite viewpoint is the writer of the blog The Great North Alabama BBQ Quest, who aspires to visit each of the sixty-some places in this area, along with a scattered few from other towns as well. It’s his opinion that all of the barbecue in and around Huntsville is good, and that Chuck Wagon in Madison – not related to the Chuck Wagon in Fayetteville, Tennessee that I’d visited the day before – was the best of them. This sounded like a good place for the three of us to meet. I had planned to be early and give myself time to take a little walk before my friends arrived, but that half-hour wait in Athens killed that idea, and I arrived just behind them at 12.30. 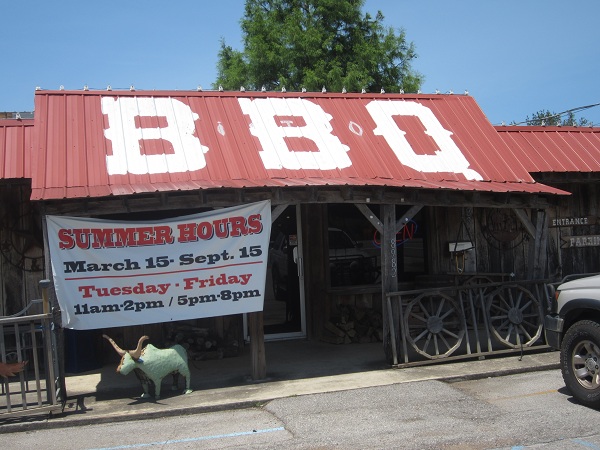 This is very much Texas-style barbecue, done in that state’s “meat market” style by a native, Mike Holley. He’s carving and weighing the meat as it is ordered, resplendent in his white beard and cowboy hat. After the lunch rush had died down, and I was about halfway through a small plate of completely awesome brisket and a terrific side of vinegar slaw made with pimentos, Holley made the rounds to check on everybody. I mentioned that I understood that he’d been in business around five years. “Sixty-three months,” he said with slow certainty. The restaurant business is a tough one. Being stuck in a row of national chains, directly between a Logan’s Roadhouse and a KFC, that’ll wear on anybody.

Now, Texans have something of a stereotype of liking to tell tall tales and big stories. In his calm and quiet way, Holley confirmed that image with us, explaining how he cooks his meat over a mix of hickory, pecan, and mesquite. He brings the mesquite back from Texas over the course of regular visits to see his mother in Del Rio, a one-way trip of 1154 miles. Recently, he’s found that the most cost-effective way to get the mesquite is to buy a cheap trailer before he leaves and sell it when he returns.

The Holleys are based today in Madison, Alabama after many years in Texas, where they ran four separate barbecue businesses over the decades, because his wife grew up just a mile away and wished to return. So she works the cash register and he tells stories of backing a trailer up to an oil derrick and selling brisket, pork, sausage and chicken to workers. I sincerely hope that the fictional aspect of the “tall tale” stereotype was at large when Holley told us a grisly story about one fellow dispatched to let a woman know that her husband had been killed on the derrick in a hideous accident. The remarkable details of this story were included to demonstrate the difference between couth and uncouth behavior. Imagine.

Should the road take you by Chuck Wagon, you might find yourself in line behind people ordering from a “secret menu,” asking for sandwiches like a chuck wagon or a San Antonio. Holley doesn’t advertise these or list them on the printed menu, but they’re sandwiches that blend a perfect balance of two or more of the meats. He believes in the mystique of word-of-mouth, so let me tell you, the next time I’m here, I’m going to want to try one of these. Y’all do that as well, and let me know how it goes.

Vincent had to get back to work, and, my budgeted hour expired, I had to race on after him, so I thanked the Holleys for my meal, refilled my sweet tea and got back on I-565, and then went south. I crossed the Tennessee River for the last time on I-65, and probably enjoyed that view most of all the natural sights that I saw on the trip. It really is beautiful. After a short time, I made it to the town of Cullman, and then crossed the path that I took on the February 2012 circumnavigation of Alabama, even driving right past Johnny’s Bar-B-Q, which I enjoyed on that trip. But I was not here for a second stop, I had another place in mind, one that came with a very curious lineage. It is called Southern Hickory, and it’s one of three stores in Alabama. 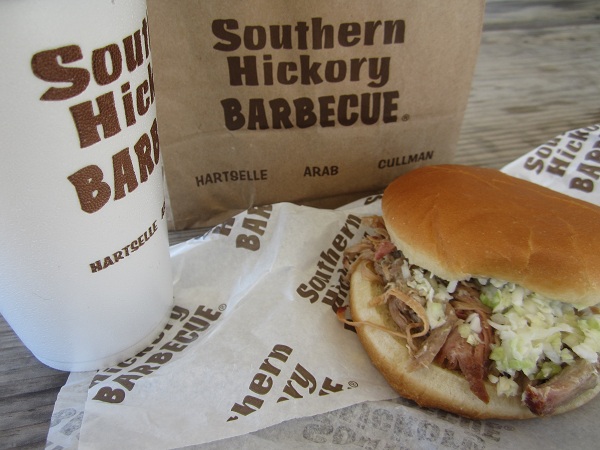 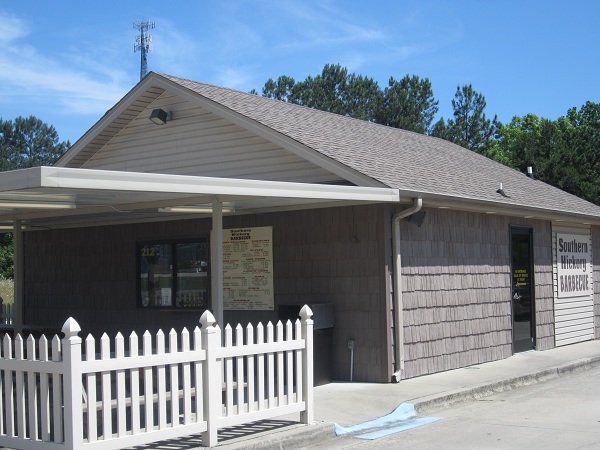 Earlier this year, my daughter and I stopped in a Rick’s Barbecue in Murfreesboro, Tennessee, and I later learned that this is a clone of a well-known regional chain, Whitt’s. Now, Whitt’s origins are still a little hazy with me, because the manager of a Whitt’s restaurant told me some facts about his company that directly contradict some other visual evidence that I have seen. He claimed that the first Whitt’s opened in Antioch, Tennessee in 1969, but Chopped Onion says that the first one was in Athens, Alabama in 1966. Whitt’s has stores all across northern Alabama and funnelling up through middle Tennessee around the I-65 corridor, with a huge concentration around Nashville. Where there’s success, there are imitations, and both Rick’s and another, similar chain, Stroud’s, dot the landscape around them. I did not notice any Stroud’s stores on my road trip, but I did see both Whitt’s and Rick’s in the Shoals area. Had I made this trip in 2003, then the Southern Hickory Barbecue that I visited in Cullman would have been a Whitt’s as well.

I seem to know more about Whitt’s than any other chain restaurant that I’ve never visited. Seriously, next time I’m in Nashville, I probably have to try one. I looked at the menu at this little place that only has outdoor seating or a drive-through available, noticed that all their sandwiches come with mayonnaise, cole slaw, and a pickle, and asked the girl at the window whether their sandwiches were like Whitt’s. She said that it used to be one. Southern Hickory’s owner used to be a Whitt’s franchisee. He has three stores, the other two closer in to the Huntsville metro area in the towns of Arab and Hartselle. When his franchise contract expired, he chose to go it alone rather than renew.

Now, the Whitt’s / Stroud’s / Rick’s chains / copies really don’t get a lot of respect or curiosity from bloggers / writers / hobbyists, and my lone visit to Rick’s didn’t persuade me that I’d been missing anything. But friends, this was a really good sandwich. I had better and I had worse on this trip, but, based on my limited experience, I instantly revised my hopes downward once I learned what I was about to eat. This was a lot better than I was expecting. It is not traditionally slow-smoked barbecue – they seem to have an electric cooker inside – but it is nevertheless very tasty. If I lived in Cullman, I’d probably go to Johnny’s more often, but I would also stop by here from time to time. I was also happy to see that the writer of the Great North Alabama BBQ Quest was very pleased with his visit to the Hartselle store.

I enjoyed it, but I didn’t quite finish the sandwich. I had three more stops to make, two of which I was really looking forward to, and decided not to push it. If the road takes me back to a Southern Hickory store, I’ll do ’em a little better and finish my meal. Promise. I also resolve that whenever the road takes us back to the Nashville area, I will do a writeup about Whitt’s and its imitators, which is long overdue.

Other blog posts about Chuck Wagon: