When Governor Bentley released the initial list of Alabama’s Barbecue Hall of Fame, I was very pleased to see some terrific old favorites of ours who made the cut (most especially the excellent Brooks Barbeque in Muscle Shoals, which everybody should visit), but as I looked over the list, the biggest standout to me was the Bar-B-Q Hut in Heflin. This was a huge surprise, because I’ve made the quick little detour off I-20 to Heflin a half-dozen times in the last five years, and was aware of the pretty good Marie’s BBQ House in the area. I even got behind their catering truck once! But I had no idea that there was another barbecue joint in that small town, especially one that opened as long ago as 1946!

So I revised the original battle plan, which included a trip to a restaurant in Anniston, and made my way from Jacksonville straight to Heflin. Unfortunately, the most interesting part of this change of plans was the drive between the two. AL-57, which connects Jacksonville with White Plains, goes up a small mountain called Whites Gap and, on this leg, is named Cottaquilla Road. It’s pretty fantastic, a twisty-turny drive with lots of blind curves and all sorts of fun. My poor little Mazda2 was not really happy with it, but I certainly was. 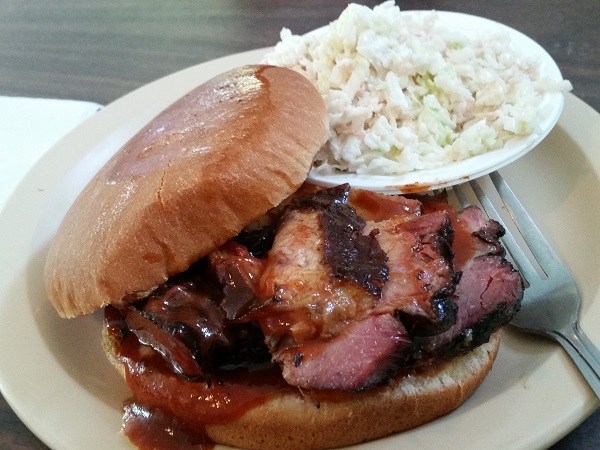 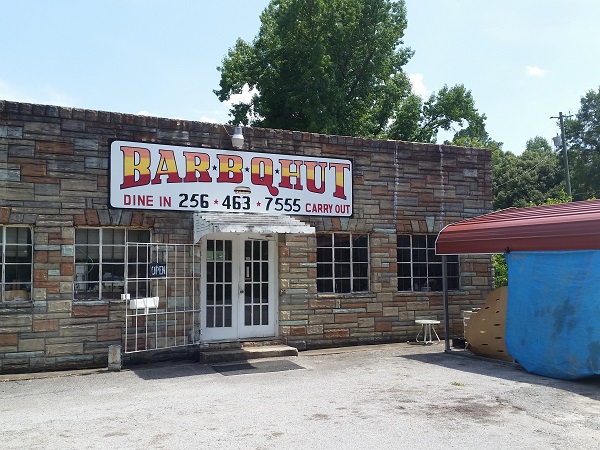 The second most interesting part of the change of plans was that when we found Bar-B-Q Hut, with a fruit stand in front selling watermelons, tomatoes, and blueberries, one of my favorite movies, Support Your Local Sheriff!, was playing on TV. And I suppose it was interesting that the sliced pork barbecue was brought in from the smoker when ordered and finished off on a grill. That’s a preparation style that is not seen very often. It would have been more interesting had I enjoyed the taste, but I did not. The meat was really fatty and I didn’t taste much smoke, although it did have a very nice and tasty sauce.

The property itself really does feel like a step back into 1946. It doesn’t feel at all like a restaurant, but an old grocery store that was jerry-rigged to serve barbecue, burgers, and Pepsi, and then evolved into a casual area hangout. There’s a knick-knack shelf with porcelain angels and things, helping enhance the feeling that I was in the living room of somebody’s old house, watching a good movie on TV and waiting for a snack, hoping that my hands-on-everything four year-old didn’t notice the rifle propped up in the corner. 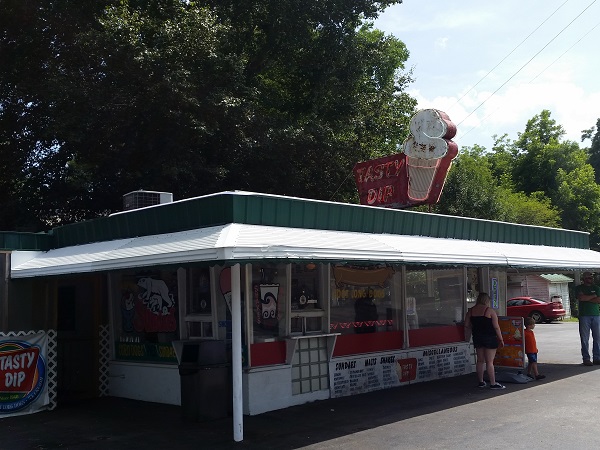 Anyway, I’ve made the quick little detour off I-20 to Heflin a half-dozen times in the last five years to visit the Tasty Dip, the town’s very popular old ice cream and hot dog stand, which we love. With all due respect to the good people at Glencoe’s Big Chief, this place makes a downright amazing grape milkshake that is in every way superior. It’s fantastic. The children enjoyed their ice cream treats as well. I noticed this time that the Tasty Dip will make a lemon-lime milkshake. That’s tempting, but with a grape milkshake so very, very good available… ah, heck, next time I’m in this part of Alabama, I’ll treat myself to both.

The kids and I got back home well before dark. That was a great little day trip. The barbecue at the four places that we tried was each quite different from the others, and even though I liked one a good deal less than the other three, I’m glad that I tried it. It left me optimistic what I would find on the day trip to Columbia that we’d take five weeks later…