In our experience, quite a few old “drive-ins” all around the southeast offer barbecue on their menus, but almost every one of them emphasizes burgers and milkshakes, and possibly a little nostalgia in their architecture, more than they emphasize smoked pork. Then there’s The Rocket, which doesn’t look or feel like any drive-in that we’ve run into, and which is much more like a proper barbecue shack than anything else. It’s also phenomenally popular. It’s a tiny little building completely packed with people, and I was afraid we’d have to eat in the car until a table opened up at the last minute.

The Rocket simplified their name – or attempted to simplify their name – in the 1980s, dropping the “Drive Inn” from all their signage, but as is the way with incredibly beloved restaurants, it didn’t take. Everybody still calls it the Drive-Inn, despite its its dark interior, stone exterior, wood-paneled walls and hard-backed chairs, and not a roller-skating car hop in sight. Cecil and Eunice Marbut purchased the restaurant in the early 1960s. Their son Gary owns it with his wife Patsy these days. Earlier in the summer, it made it on the state’s Barbecue Hall of Fame, celebrating more than fifty years of business. 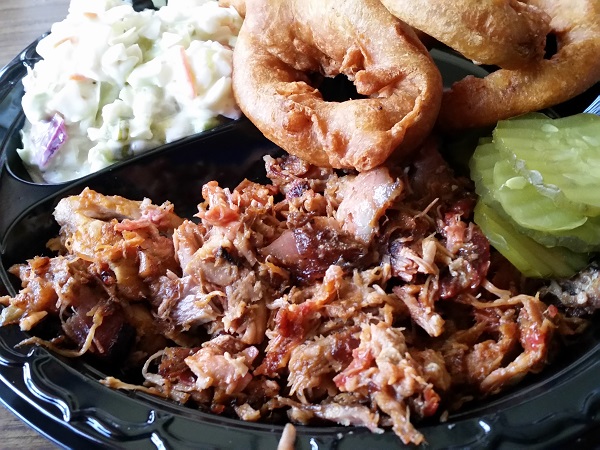 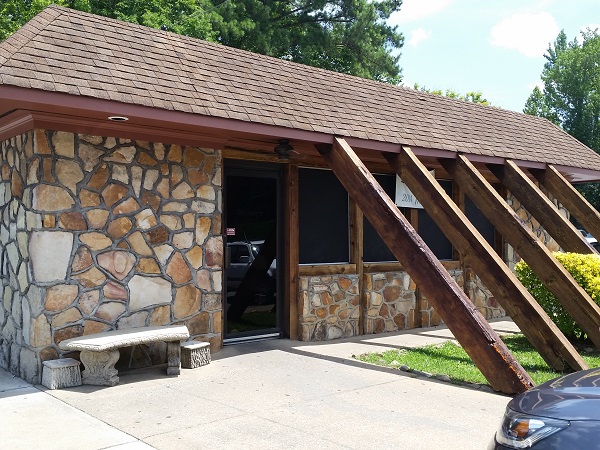 The Marbuts keep the locals coming back on the strength of their very interesting chopped pork. This is really smoky and dry, with a very strong flavor. As most of the barbecue that I’ve sampled recently has a milder flavor, I was pleasantly surprised by how very smoky and strong this was. They smoke Boston butts for twelve hours here. Like quite a few Alabama pits, there is an outside access to the pit to add wood, with access in the kitchen to pull the meat. You can just catch a glimpse of what’s going on in the very busy kitchen through the service window.

If only the sides were as interesting as the pork, though. My daughter asked for some fried mac-n-cheese and ate one of them. My son complained about the hot dog. Mind, he’s four, and not really able to communicate precisely why he didn’t like something, but he had one bite and said that he did not like it. I had onion rings, and since I’ve made a federal case about preferring freshly-made rings to frozen, it would have been nice to report something good, but these were just soft and chewy, almost pillowy, like gently fried doughnuts with an onion inside. The slaw was harmless, but also very bland.

Still, it would be churlish to argue with such an amazing success that still has people packing the place on Saturday afternoons. I liked the barbecue enough to come back sometime and try some different sides. They do good work here and the locals love ’em. I hope that they’re around for the next five decades. But we couldn’t linger; the line was just as long as it was when we arrived, and people wanted our table.

4 thoughts on “The Rocket, Jacksonville AL”