We’d heard from a couple of people that the burgers at Little’s, a small grocery store in Cabbagetown that traces its origins to 1929, are among the best in the city. What nobody told us, criminally, is that they also make some of the best onion rings on the planet. No kidding; I might like these as much as the amazing rings at Pizza Palace in Knoxville, if not more.

The grocery store was run by Leon Little for a few decades, and quietly served as a neighborhood convenience stop for locals, not drawing any more attention to itself over the years than any other quickie-mart shop. It eventually closed in 2005, and reopened six years later. Brad Cunard opened the business anew in 2011, but the building needed mammoth renovations and crowds didn’t come. The neighbors did, but so much money was needed to refurbish the structure itself and pay off sales tax obligations that it really needed either lots of diners or a mammoth injection of cash.

Cabbagetown’s zoning, while creating a very good neighborhood, has hindered any business looking outward for customers. The community is several streets of tightly-packed old milltown houses, all residential, with very little parking available, and only one block of retail business. Nobody drives around here looking for a good restaurant and shopping as they might do in all the neighborhoods on the other side of Dekalb Avenue. When Helen invited us to join her one Sunday evening last month, we parked two streets away, enjoying the walk and saying hellos to all the people on their porches. 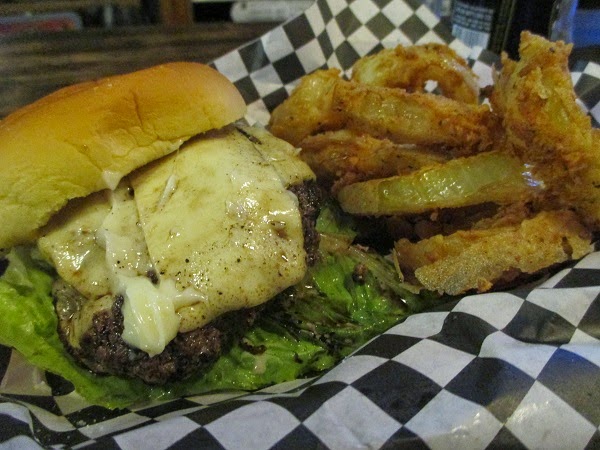 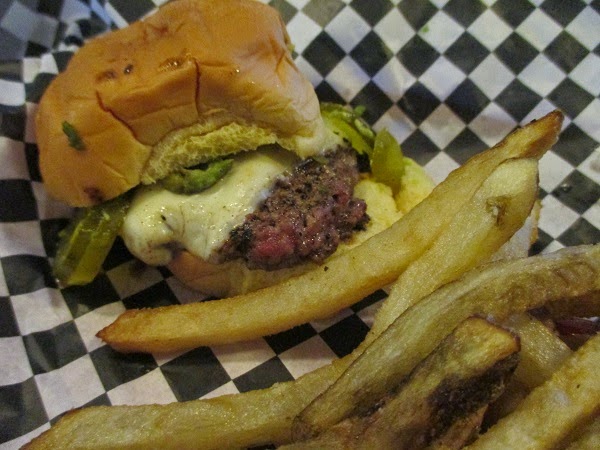 Anyway, after two years, Cunard announced that he would have to close Little’s, and the community roared to life, launching a fundraiser through Indiegogo to keep the doors open, pay off the creditors, and reinforce the building. Cunard had announced the shop would close on December 31st of 2013, but, with a “Christmas miracle,” he was able to stay open.

Man alive, I really wish that we’d have come visit before we did. The burgers are indeed very good, but these onion rings – they are just amazing. That breading is perfect, just a kiss of spiciness in there. I want to drive back to Cabbagetown for another basket of them. I don’t mind parking two streets away and walking, really I don’t. Apparently, every once in a while, they’ll do fried pickles here in the same breading as a special. Should you be so fortunate as to stop by for groceries or a burger while those are on the menu, you should probably order those. 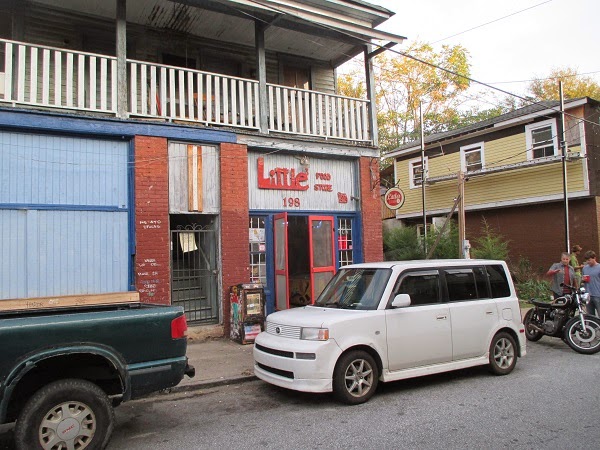 There’s not a lot of counter seating at Little’s, and the music, on our visit, was blisteringly loud death metal, unfortunately. The grocery store has a pretty decent selection of wine and beer, and a really nice cooler of bottled sodas. Why yes, a Boylan’s Birch Beer goes extremely well with a Big Little Burger and rings, actually. There’s a small glass display case full of old treasures like lunchboxes and Star Wars figures and hockey pucks from not one but both of the NHL teams that have fled Atlanta.

On the way home, after our son managed to shriek so loudly at the sight of a big bug on the pavement that he started every single dog for three blocks barking, we drove through the Krog Street Tunnel, getting to enjoy all the colorful art on the last weekend that it was visible. Fighting off a promoter who had wrangled permission to hold a “masquerade” there, three nights later, a hundred aggravated neighbors descended on it with paint to whitewash the whole beautiful thing. Maybe, by the time this chapter is published, it’ll look all weird and wonderful again.