On the Sunday morning of our trip, our son got us up bright and early and we had a light breakfast in the hotel, and then took a relaxed and fun drive through middle Tennessee to get to Chattanooga for lunch. Instead of going the usual way (I-24), since we were a little east of Nashville on I-40, we just continued that way for 40-odd miles, and then, around Cookeville, picked up TN-111 and went south, up and down over a couple of mountains. We’d seen the southern edge of this road once before, in the summer of 2010, when we visited Fall Creek Falls State Park. It’s all very, very pretty.

TN-111 feeds into US-27 around Soddy-Daisy, and we took that south to TN-153, and that across the Chickamauga Dam to TN-58, and that’s where you’ll find a tiny little barbecue joint, one of the few in the area that’s open on Sundays, next door to an Ace Hardware. Hwy 58 BBQ has been open for a little more than ten years, mainly doing take-out. There’s a small patio between their ordering window and their smokehouse room with space for about ten guests. 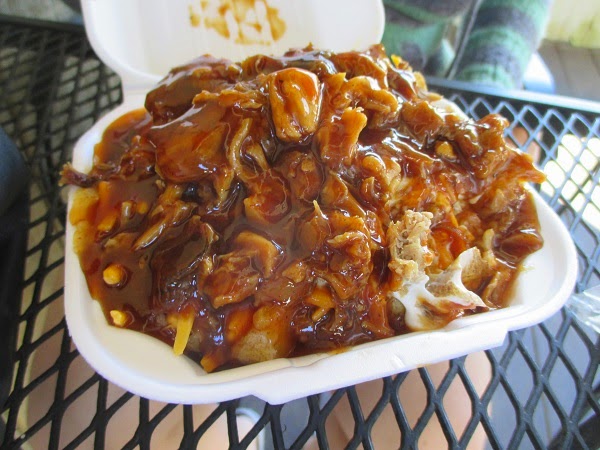 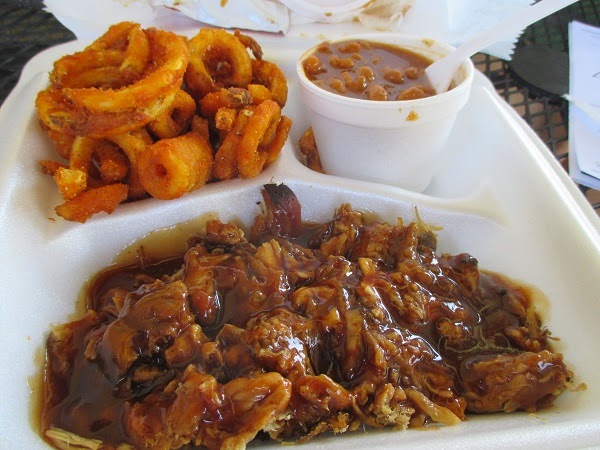 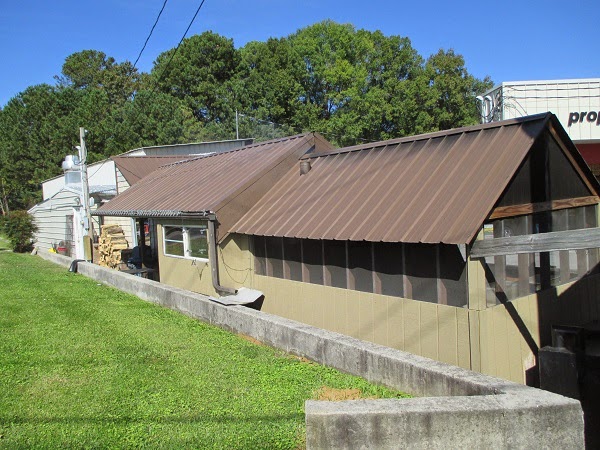 In some of our recent chapters about barbecue, I’ve mentioned how the once-dominant style of Atlanta barbecue, chopped pork served with a ladle of thick, mildly sweet sauce, has been somewhat supplanted by pulled pork without sauce. In Chattanooga, however, this older style is still the dominant one, and is seen at most of the area’s restaurants. A $7 pork plate here is almost exactly like what a $7 pork plate looked like at the majority of restaurants in Atlanta fifteen years ago. I thought this was pretty good pork, but there was way too much sauce, overpowering the meat completely. I do hate myself when I forget to ask for the meat dry.

They also offer a “killer potato” which is packed with your choice of meats, sour cream, butter, and cheese, and then drowned in barbecue sauce. Plus there are the expected burgers and hot dogs and chicken tenders for the non-barbecue members of your party. Because the girlchild insisted on the killer potato, our total came to around $25 for the four of us; I would have preferred to have spent a little less money and simply ordered “The Tennessean,” a very reasonably-priced $18.29 meal with either pork or beef, baked beans, potato salad, and cole slaw for four.

I thought this was a pretty good meal, and while I believe that I would have enjoyed it more without all the sauce, I did like it better than the barbecue we had the previous evening. Marie was also pleased, but underwhelmed. The girlchild was taken aback by her potato having so much sauce, which was too sweet for her liking, and wasn’t happy about her lunch at all. So we left without the wow factor that we had hoped for, but I also think that playing with the menu a little more carefully might have pleased everybody more. It’s probably worth another visit sometime to give them another chance.