Buckhead Atlanta, the not-all-that-imaginatively-named development at the corner of Peachtree and Pharr in the Buckhead neighborhood of Atlanta, is home to some luxury apartment homes, high-end boutiques, and some interesting restaurants. At the time of writing, nine of the thirteen restaurants are yet to open, but four are already doing good business, including the first Atlanta location of the celebrated Shake Shack, and a quite neat tapa place called Gypsy Kitchen. It’s the latest opening for Southern Proper Hospitality, the team behind Big Ketch Saltwater Grill and Smokebelly; another of their restaurants, The Southern Gentleman, will be among the next to open in Buckhead Atlanta.

Marie and I were invited to try Gypsy Kitchen and we had a very nice time here. Gypsy Kitchen is, broadly, a Spanish-themed concept incorporating flavors and influences from India, Morocco and Southeast Asia. Located on the second floor of the development, there is both an open-air patio and an enclosed area for outdoor seating with heaters. Most of the pre-launch hype for Gypsy Kitchen has centered around the bar program, headed by Michael Searles, who previously worked locally at Holeman & Finch and at Restaurant Eugene. The wine and beer list here seems small but eclectic; most of the attention is paid to a small list of interesting house craft cocktails that utilize indigenous Spanish ingredients including spices like smoked paprika, cloves, pepper, cardamom and saffron.

The interior is designed to show off baroque-style décor with mosaic tile and deep red leather, and the centerpiece of the bar is a whacking great metal statue of a bull. The lighting is low, but on this trip, we got ahead of ourselves and asked to be seated where the lighting was best, and Marie shot some pretty decent photos of our very nice meal. Makes a nice change from having to go back to the PR agency that invited us, cap in hand, for some visuals. 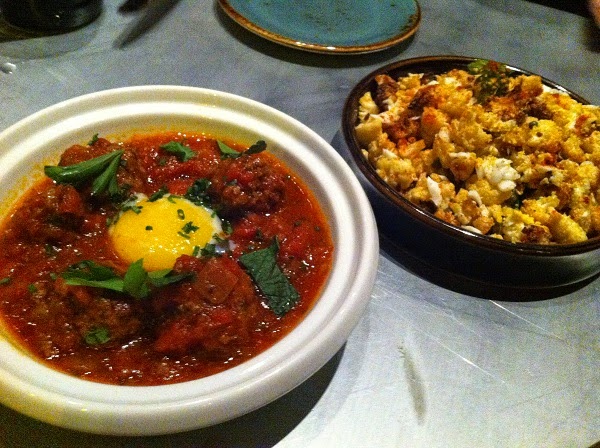 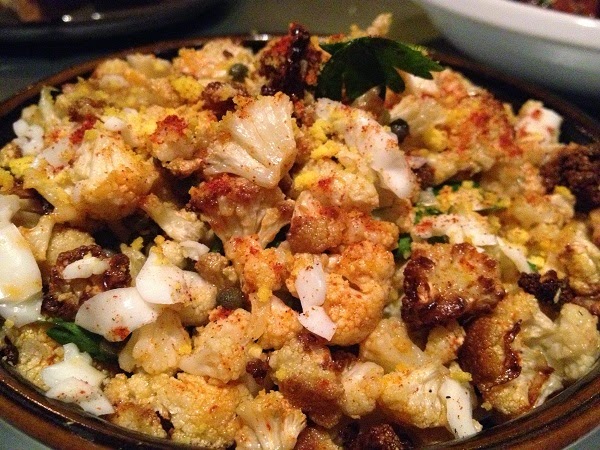 As we expected from a tapa restaurant, the plates are small, but absolutely packed with flavor. We sampled six items on the menu, and thought that four of them were quite good and two were downright excellent. We started with a slice of Spanish-style toast, with a very crispy crust, with a smear of house-made “Nutella” crafted from Marcona almonds and topped with shaved chorizo, and a small cheese plate. Marie selected a Spanish blue cheese, Valdeón, which comes with bread and a little quince paste.

After these, we ordered from the appetizer section of the menu. There was so much to choose from, but we initially picked the lamb kefta tagine meatballs and the roasted cauliflower salad. We enjoyed the meatballs just fine, and would happily recommend them. Served in a tomato sauce with an egg, they were really tender and full of flavor. However, and these are words that I never, ever thought that I would type, that cauliflower salad was exponentially better than the meatballs. Roasted with some very smoky paprika, capers, and a grated hard-boiled egg, I’m reasonably confident that I’ve never enjoyed better cauliflower, ever. Definitely order this, friends. 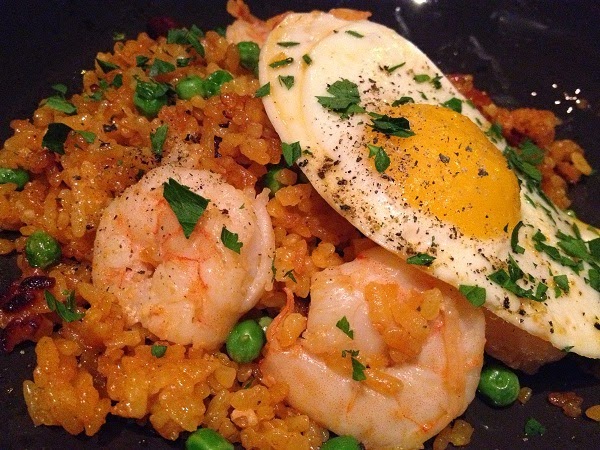 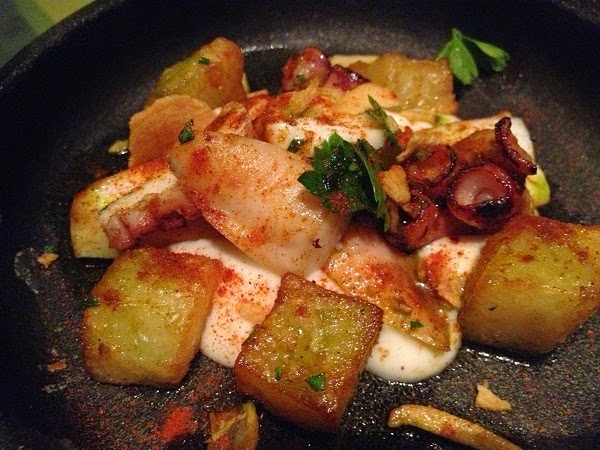 The paella-style fried rice was not quite so amazing, but it was certainly worth sampling. I’ve had better and I’ve had worse paella, and this was comparatively quite simple, including only egg, shrimp, chorizo, and peas, but the simplicity worked in its favor, allowing each ingredient to shine. On the other hand, the confit Spanish octopus is an absolute must. Our friend Sandy at Bella Vivere had raved about it on Twitter and so I definitely wanted to try that, and I was not at all disappointed. The octopus is cooked on low heat for sixteen hours, and, served with potato, garlic chips, and paprika in a creamy sauce, it is definitely a standout dish.

I enjoyed this octopus tremendously, and told our server, whose name is Oscar and who was incredibly informative and super-helpful, that I’ve asked Marie and the kids to bring me back by Buckhead Atlanta in a couple of weeks to try Shake Shack, which is located directly beneath Gypsy Kitchen, for my birthday. That had better be a really good burger, otherwise, I’ll end up scowling at the ceiling, wishing that I was upstairs having more of this octopus.