My favorite restaurant in the entire world closed more than five years ago, in January 2009. Here is a farewell that I wrote for it a few days later, about a year before we began writing our blog. I was reminded of it when Cinco y Diez closed last month, and I realized that I’ve been to Athens so few times in the last ten months that I never found the opportunity to try it. Cinco y Diez was located across the parking lot from where the Five Points Mean Bean had been located. The former location has been home, for several years, to The Royal Peasant.

I was remembering, literally one day before we got the news, a funny little incident in 2001. Nostalgia had prompted me, then, to get some of the gang back together, and assemble at my apartment in Alpharetta for a game of Illuminati. This was more than five years before we’d kiss goodnight for the first time, and Marie, then just a good buddy, had asked whether she could bring anything from Athens for the game. “Eh, swing by the Mean Bean and bring me a burrito,” I joked.

I’d have saved myself a great deal of trouble, drama and psychosis in the intervening years if I’d’ve had the sense to throw all else aside and ask her to marry me right then and there. Clearly, she was the one.

So my favorite restaurant, the restaurant that was, to us, so much more than just a place where food was sold, has closed. The Mean Bean was my Cheers, where everybody – well, the owner – knows your name, where, for almost twenty years I enjoyed the best simple meals around.

Theirs was a formula available at many other places, but nobody, not the Taco Stand, not Extreme, not Z-Teca, not Qdobe, not Willy’s, not Moe’s, not La Bamba, not Barberito’s, was able to match in taste. Somehow, the seasoning and the spice and all those wonderful vegetables produced a burrito that was in every way superior to anybody else’s. They made magic from simple ingredients. Their recipes relied on product bought in bulk. When they briefly made inroads into Atlanta in the mid-90s, Creative Loafing was appalled by the canned, pickled jalapenos, and you could not count on freshly-made chips here. They came from giant white bags. Perhaps they are not Golden Flake’s “Maizetos” brand, but those are the chips which taste the most like the Mean Bean’s, and so that is what I buy at the grocery store. But I’ll never be able to purchase that salsa. 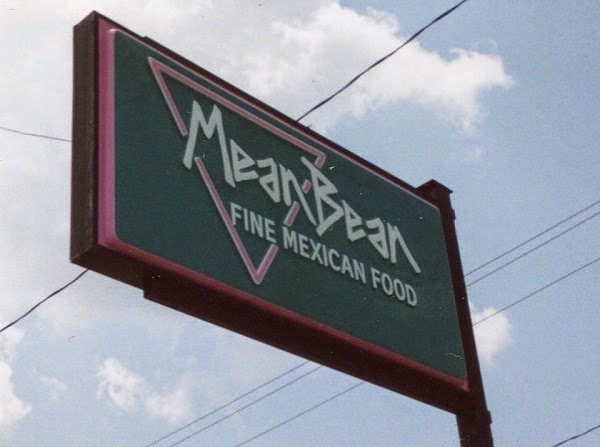 I stumbled upon the Mean Bean in the spring of 1989, on a Saturday orientation visit to the campus and its accompanying town with my parents. I fell in love at first sight. Because three years before, there was a black and white indy comic called Ultra Klutz and one issue contained the immortal line “Go away, bad alien fish man.” A year after that, I was laughing with my high school sweetheart in the St. Louis airport, being silly and pointing and laughing at odd looking people, one of whom had pulled a potato from her purse, and she was slapping the side of it. “It must be a bad potato,” she had said. “Go away, bad potato!” I replied, remembering the comic. Bad Potato became a regular character in our teenage silliness. He was joined by the Mean Bean. Wacky hijinks ensued. Two years on, and here was this restaurant with the same name as this violent legume who decorated the margins of a dozen or more college-ruled notebook paper notes, and had his own theme song. I simply had to eat there. I loved it so much that I was eating at their location on College twice a week, almost every week for the three years I lived at Reed Hall. Over time, that grows into a lot of burritos.

(Susan Brown and Connie Wilson had opened the Mean Bean in a little kiosk by the steps leading up to what would later be Bizarro Wuxtry in 1986. Two years later, they moved the business to College Square, and, in the summer of 1989, sold ice cream from the kiosk as “The Vanilla Bean.”)

There was an occasion that second spring where I enjoyed the best meal I have ever had. It was one of those cases where you and everybody on your floor gets sick and stays sick. Everybody came back from Christmas sick. A friend put me on a diet of rice cakes, and spicy food was off the menu, and so was the Mean Bean. Two weeks of those rice cakes and I was ready to kill somebody, even if I didn’t have the strength to tear an angel food cake in half. It might have been Sunday the 13th when I finally said I’d had enough and crept downtown. I just wanted a plate of nachos. With extra hot sauce. And extra peppers. And none of you, not one of you, has ever had a plate of nachos that good, ever. Then it started to rain. I could’ve jumped in a swimming pool and not got so wet as I did walking home. I gave up the next day, and whined for my mommy and daddy to come pick me up and bring me back and take care of me. They announced Operation Desert Storm had been launched on the ride back. 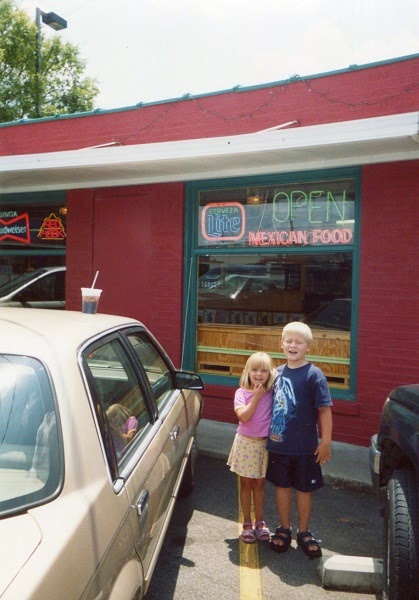 2004: The girlchild, ten years ago, with her rarely-seen older brother outside the Five Points store.

I think it was 1994 when the downtown location closed. They’d opened another in Five Points and another on the east side, but the downtown place was where we went. Susan invited me to a customer appreciation farewell fiesta the day (or was it the week?) after they officially stopped serving. I’d had so many hundreds of burritos by that point, and so many little goofball memories that I couldn’t stay long. The visit broke my heart. There was a quarter gum machine by the door. Somehow, after a Mean Bean Deluxe and a half order of chips with hot sauce and a sweet tea, that same little faux-Chicklet gum was the best gum in the world. I wanted to take it with me.

Like any long-term relationship, there was a period of upheaval. I moved away in 2000, and came back to find that the east side location had rewarded an ex-girlfriend with a Customer of the Week Polaroid. I wasn’t certain who to be more petulantly aggravated with: the restaurant for sticking her darn picture on the wall, or her for being so crass as to dare and continue to eat at my favorite restaurant, in flagrant violation of some breakup etiquette I’d spent seconds concocting to justify my position.

The Mean Bean somehow thrived among its small and devoted clientele even as fashions changed. Some Atlanta-based chains had perfected a system of prepping in front of the customer as they moved down the line. Barberito’s, a local chain based on those models, started to grow, and when Susan sold the business to Tony Young, he sold the east side location to the upstarts. Make no mistake: Barberito’s is indeed very good, but it was never Mean Bean. Their mid-90s plans for expansion came to nothing, and for the last several years, the town’s best burritos were to be had only in Five Points. It was a destination for cyclists, and a favorite of Coach Mark Richt, but I recall raising the unthinkable probability that its time must surely be numbered in a conversation three years back, such was the uncomfortable reality of the Mean Bean’s small crowds in the face of larger competition. Yet somehow Tony hung on for a little longer.

My children have been raised from birth on the Mean Bean. It has been our place. At least every second trip to Athens for the last nine years, as we have visited every three or four weeks, has included a meal here. Sometimes we invited friends to cram into that tiny space, sometimes the kids let me read the latest 2000 AD while they colored. It has been, for them, just as much of the fabric of Athens as the university and the Bulldogs. A city without it is unthinkable.

But they never learned to love the gazpacho. Many didn’t; it was only available sporadically. It was, if we break this down into unemotional, unopinionated fact, quite simply and without debate the finest soup that has ever been made. A bowl of that with a spoonful of sour cream and some of those chips on the side was the best meal that money could buy. If you never had it, then I regret to inform you that you will go to your grave never having enjoyed a soup as good as I’ve had. Sorry, but them’s the breaks.

I am choking back tears for a third day now. This is perhaps an extreme reaction to what is, on paper, merely one more restaurant closing among the tidal wave that will have gone before this economy recovers. Speaking personally, there have been worse things in our life, and there will inevitably be worse to come. Some of us turn to a glass to cushion life’s blows, but I have turned to a Mean Bean Deluxe, light on the sour cream and possibly with extra tomatoes and cheese. 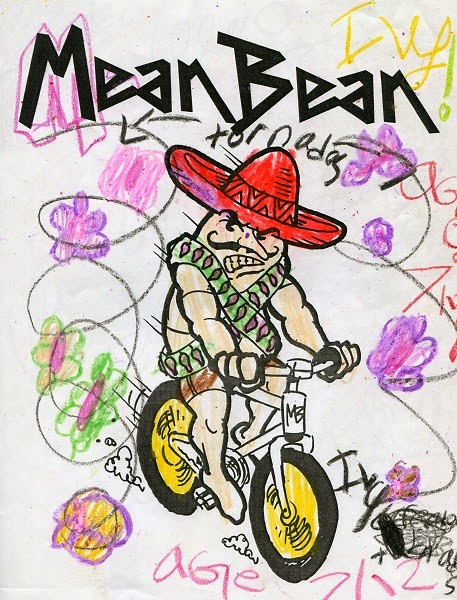 Once you leave it, every little change in a town’s infrastructure breaks your heart. You wish you could capture it in amber, and never let railroad tracks be uprooted or newsstands shutter or record labels close. I fell in love with Athens twenty years ago. There are a hundred other reasons to visit, and a hundred more people to see, and a hundred more places to eat and shop.

But the very best reason of all is gone. My home-away-from-home is gone, and a very large piece of my heart is gone with it.

Did you love The Mean Bean as well? Do you have any photos to share? Please leave us a comment below!