Derek’s is the living definition of a rainy day restaurant. I’ve been saving it for a rainy day for more than ten years, figuring that I’d stop by eventually. The restaurant serves breakfast and lunch from a wide, shallow building on Canton Road with very little parking, and I sometimes wondered what their food was like.

A few weeks ago, I was having lunch at Brandi’s World Famous Hot Dogs, and spoke to one of my fellow chili addicts about good eating in Marietta. He told me that he loved the Cuban sandwich at Derek’s, that it was the best that he ever had. “That’s pretty high praise,” I said. “Havana on Buford Highway makes a very good Cuban.” He said that he had been to Havana, and agreed that theirs was tasty, but nothing like the one at Derek’s. Then, the following week, Spatialdrift posted about their trip to Birmingham to try the celebrated Cuban at Kool Korner. Seemed like the stars were lining up to point me to Derek’s. 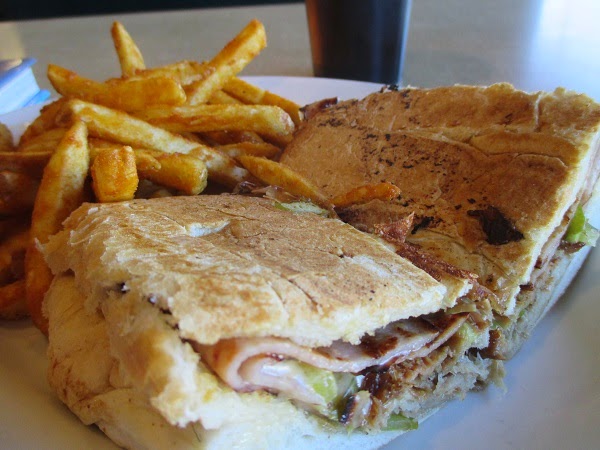 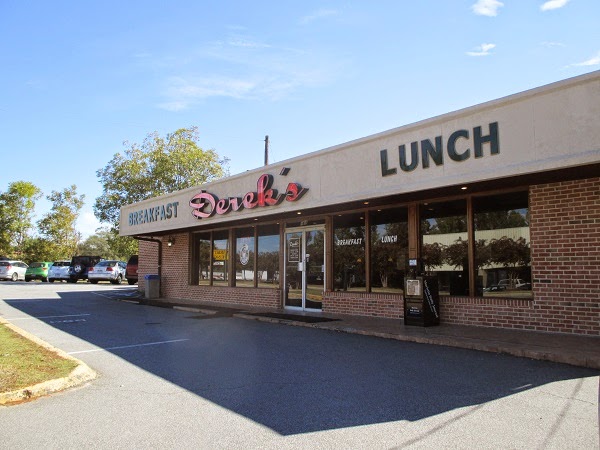 Derek’s has been here for at least fifteen years, and probably a lot longer, but the woman working the cash register didn’t really date it that far back herself. The present owners took over in 2011, I think, and added several Central American items to the menu, like soups, mashed plantains with chicken, or costillas de cerdo (grilled pork ribs). They still do big breakfasts and have a nice cafeteria line with meat-and-three specials like I believe the restaurant has always done – it’s very much a classic diner in a more contemporary building – but it’s done with a nice flair for various regional specialties, reflecting the tastes of the owners and the growing segment of the area’s population who come from Spanish-speaking countries.

So I stopped by on a Friday a couple of weeks after Spatialdrift’s article got me thinking about Cubans, and this place just plain knocked it out of the park. It was a really, really good sandwich! Incredibly good bread, tasty meats, a lovely pickle crunch… this was just a fine, fine sandwich. This place should be open for dinner. It’s a good restaurant, a fine place to spend a half hour with a book and an attentive server stopping by to refill your sweet tea. It never got completely full while I was there, but business was very steady, and somebody wanted my parking place as soon as I’d taken a few pictures. I owe that fellow at Brandi’s my thanks for sharing this restaurant with me.

Is it as good as Kool Korner’s, though? I have to say that I don’t really know. It’s been too long since I was there. Maybe we’ll have to go back through Birmingham someday soon and have one…

One thought on “Derek’s, Marietta GA”