It was another one of those Friday evenings where I could have stayed home and not dealt with traffic any more, but the 5:00 news report on the northbound drive was grim and Marie has a worse commute than I do every day anyway, so I told her to stay put, and we’d come pick her up for supper. I mentioned to the girlchild that I was thinking about a Mediterranean restaurant and she balked at going out.

I see the cycle from space: after about seven invitations to join us for a meal that she’ll decline, she’ll let her mercurial teenage weirdness roar out of control and she’ll complain that we take the boychild to dinner, and never her. That she bows out of dinners in favor of Pretty Little Liars or church or giggling on the telephone doesn’t matter. Or we’ll hear the “Why can’t we just go to the same restaurants that all my friends’ parents go?” complaint. Duly noted: take the child someplace that serves Kung Pao chicken sometime soon or she’ll explode*.

Cafe Sababa is located in a little strip mall on North Shallowford Road, alongside several other restaurants (Simply Thai, Bay Leaf, Chopsticks) and an old coin laundry that looks like it’s been here for fifty years. This restaurant, on the other hand, is much newer – it opened in May 2010 – and why more people aren’t singing its praises, I have no idea. The owner and chef, Doni Tamli, is serving some of the best Mediterranean cooking in the city. Mr. Tamli, who was born in Israel, is mixing up some amazing flavors here, and I am looking forward to trying more things from his menu. He once worked at Cafe Ofi, which was located practically around the corner, on Tilly Mill Road. I wish I’d stopped in there a time or twelve. 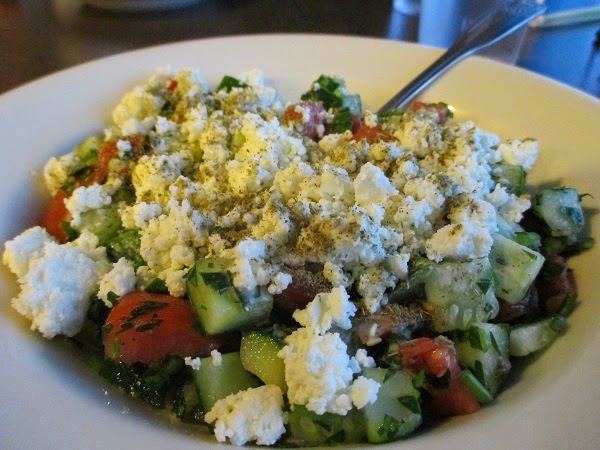 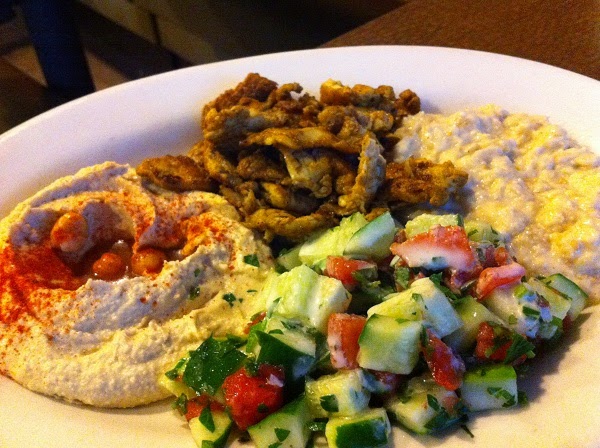 Unfortunately, the three year-old fell asleep on the ride to pick up Mommy, woke in a terrible mood, and didn’t want anything but Goldfish crackers and a Sprite. The staff was completely awesome and gave Marie some extra fries with her sandwich; he pouted as he munched on those, and refused any other food. I started with a Sababa salad, made with diced cucumbers, tomatoes, parsley, and mint mixed with za’atar spice and topped with feta cheese and a lemon dressing. It was excellent, and the boy was a fool to miss out on the cucumbers that I offered him.

I ordered the shawarma platter, which is accurately described on the menu as “succulent slivers of chicken with our special shawarma seasoning.” Succulent, absolutely. It comes with baba ghanoush, hummus, and a cucumber salad that was a little nearer in flavor to the Sababa salad that I’d already ordered than I’d have preferred. While I loved the chicken, hummus, and baba ghanoush very much, I probably would have ordered a different starter salad had I realized that the “chopped salad” described on the menu was so similar. 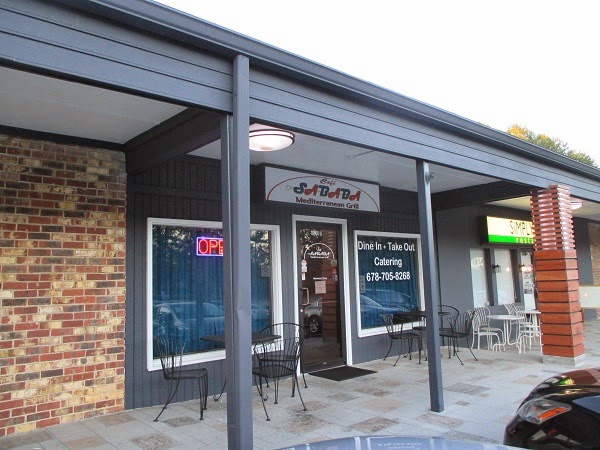 Marie has never been as big a fan of Mediterranean cooking as me, but she enjoyed a souvlaki wrap, made with grilled chicken breast in Greek spices, with feta cheese, lettuce, tomatoes, onions, and tzatziki sauce in a grilled pita.

Since this was our first visit, I wanted to try something fairly traditional and something that didn’t surprise me much. That means we skipped on their usual weekend special, which sounds very good. It’s a Moroccan-style brisket, served in a hearty stew over yellow rice, and available every Friday and Saturday evening. As I rolled the vibrant mix of flavors of the chicken around, I had a good feeling that this place can work all sorts of wonders, and that brisket seemed much more interesting as the evening went on. Our weekends will be very busy for quite some time, but I hope that we can stop in again before too long. I would really, really like to try that!

*Postscript: So my mother was in town a couple of weeks after I wrote this. She took my daughter to Olive Garden, which pleased her enormously, and gave us a few days’ respite in meal planning.