The unbelievable mob at our city’s first Shake Shack, part of the new Buckhead Atlanta development and located right on Peachtree Road, underneath Gypsy Kitchen and The Southern Gentleman, gives us some indication what the crowd might be like should In-N-Out Burger ever open in our fair town. About a month ago, Marie treated me to lunch here for my birthday. Our friend David joined us and it was quite a crowd. David commented that he’d never seen a restaurant dedicate one staff member to “queue control” duty.

Shake Shack is only eleven years old, but the chain has a legion of followers like very few others. Lots of out-of-town chains make their way to Atlanta with minimal fuss or furor, even if they may have come from huge success in their hometowns. Nobody really cared that El Pollo Loco once had a presence here despite hundreds of successful stores in the southwest, where it is very popular. But Shake Shack, with incredible word-of-mouth and ongoing news reports from national foodie sites like Eater and Serious Eats, is a whole ‘nuther level of hype. 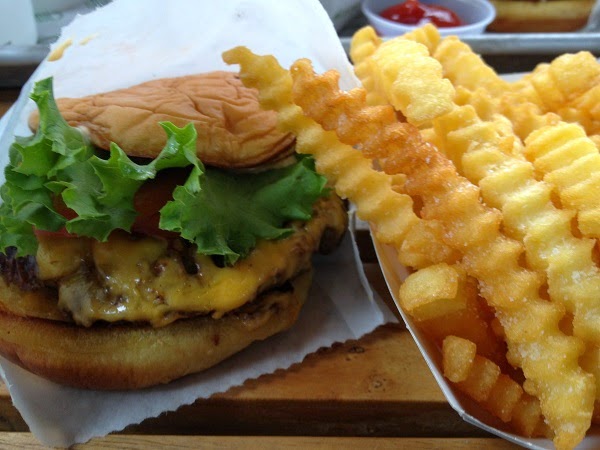 They started in Manhattan’s Madison Square Park in 2004, following three years as a rolling cart. Owned by Union Square Hospitality Group, this is very far from the sort of small family business or local, chef-driven enterprise that we typically visit. Over the last eleven years, they have expanded to 34 domestic locations in ten states (Florida the only other one in our region, with four stores), and a further 25 stores in other countries, most in the Middle East. 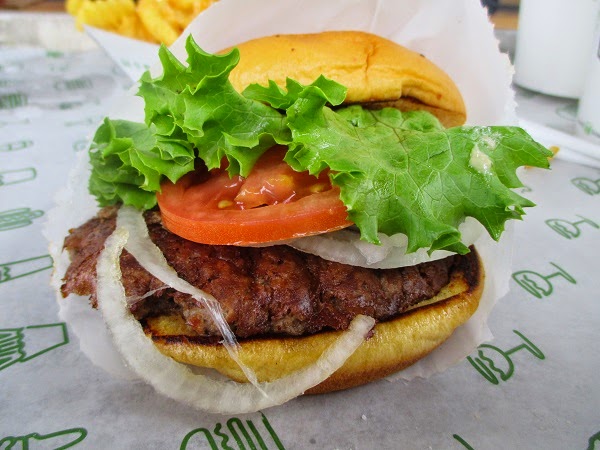 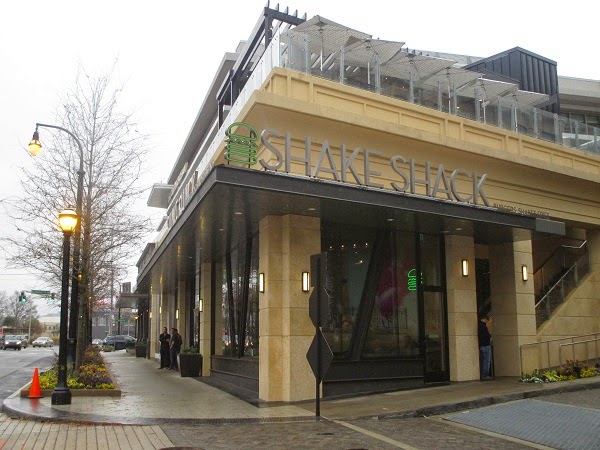 The burgers are very good for their segment and their price point. I don’t think that they’re quite as good as Cheeseburger Bobby’s – and, with the mayhem of that crowd, there was no opportunity for the staff to impress the way that Bobby’s team quietly, and consistently, does – but they’re about on par with the other “better burger” chains that have moved into Atlanta, like Burger Fi and Smashburger. It’s a good, tasty patty, and I really did like the salty crinkle fries with cheese sauce. Finishing up with a fine “black and white” vanilla-chocolate shake was nice, but all things being equal, I’d prefer to stick with Cheeseburger Bobby’s.

David was also pleased with his burger, but, as I predicted when we went to Gypsy Kitchen, just being so close to that restaurant had me wanting to try that confit octopus again, and he agreed that sounded fantastic and thought about coming back for dinner sometime soon.

From our vantage point, we could look down and see some of the very unusual marketing that Buckhead Atlanta is doing to stand out. We could see a blonde woman in a gorgeous 1920s-styled evening gown and large burlesque fans striking poses, and a little later, we spotted a pair of stiltwalkers in old-fashioned carnival wear. I like this development. It’s deliberately and amusingly odd, and since so many people are still pouring in to try Shake Shack, I think that the layout of the center and the theatrics will encourage people to stay and shop. They’re onto a good thing.