So, my daughter. God bless her, she’s a teenager. Is she ever a teenager. Because on the one hand, she’s prone to push back against what we’d like her to do, and eat, and because on the other hand, she wants to eat where all her friends eat, she doesn’t often join us when we pick a place that sounds too weird. And by weird, we mean a Chinese place that doesn’t offer sweet and sour chicken with broccoli. Meryn Cadell once sang of a girl who longed for “the boy of your dreams who is the same boy in the dreams of all your friends.” My girl.

And so, regrettably, in the interest of peace in the neighborhood, we occasionally make some compromises that don’t end up on this blog of ours. Sometimes, we have to suck it up and make the girlchild happy, and that sometimes means we end up at Panera. Or worse, but Panera’s usually what we’re talking about. Geez, that place.

Chicken Salad Chick opened a store in Kennesaw, not far from us, several months ago, but it has terrible hours. It isn’t open on Sundays and it isn’t open for dinner, and it’s a rare, rare Saturday when we’re in the area. I’m familiar with the small chain. When we were in Auburn about a year ago, we visited the original store, but I only had a nibble of Marie’s meal, planning for other things elsewhere that day. I had yet to dig in to the store’s fifteen varieties of chicken salad. So one Saturday, Marie had to go into work and I needed to go out with the kids and decided this sounded good. Of course, when I told the girlchild where we were headed, she said “ew.” She’s a teenager. 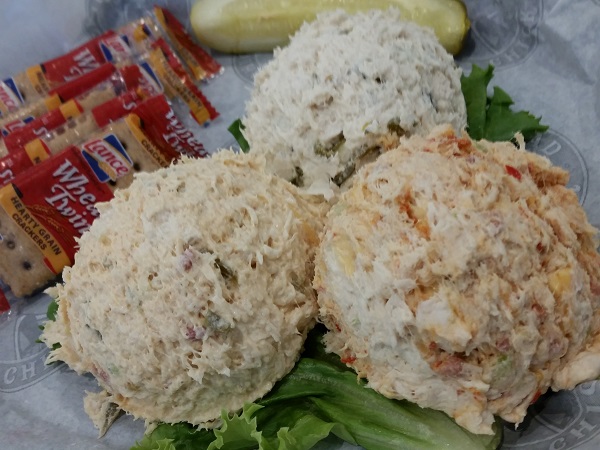 “You don’t have to eat anything,” I told her. “If they don’t have anything on their menu that sounds good, I’ll get you something from some drive-thru somewhere.” And so she said “whatever” and put on her headphones and listened to Morrissey because The World Won’t Listen to her. Please don’t tell Morrissey that his youngest fan likes bacon. He may cancel another Atlanta show with a case of the vapors.

I ordered the trio with three of the four spicy varieties of chicken salad. I suppose I might have done better to sample a wider variety of flavors – Mimi’s Mix, with cashews and Fuji apples, really does sound good – but I went with Jalapeno Holly, Kickin’ Kay Lynne, and Jazzy Julie, and loved them all, the Holly most of all. The four year-old happily enjoyed a fruit cup. The place is not too fussy, simple, welcoming. It reminds me of the Utah-based chain Apple Spice Junction, and you can bet that they do a big chunk of business catering corporate lunches. (Apple Spice, incidentally, was among the unique-to-Atlanta restaurants along Alpharetta’s Windward Parkway once upon a time, and while there are a dozen personalized reasons why each of the more interesting businesses that were there in 2004-09 failed, I believe that Apple Spice fumbled because they couldn’t beat Jason’s Deli’s catering prices, and Jason’s catered every business lunch for six miles in every direction.)

As we stood in line, the girlchild announced that she supposed she could have a soup and salad combo here. I was glad to hear it, and so she had some tomato soup with a pimento cheese sandwich. Her eyes lit up like dinner plates as she tried them. “This is so good. This is the best pimento cheese I ever had,” she whispered.

When we left, she shook her head and said “This place is better than Panera. Way better.” There’s hope. There’s hope.