In a few previous chapters, I’ve expressed our desire to do a much more thorough investigation of barbecue joints in northwest Georgia, around the Dalton area. But the hills around Ellijay are likewise hiding a number of restaurants that our blog needs to uncover. Heading north up I-575 from Marietta, we’ve mentioned several already, including Bub-Ba-Q, Mo-Ribs, Two Brothers, Davis, Walker’s and of course Poole’s, but I know of four more just off the top of my head that we have not visited. Happily, a couple of Saturdays ago, we crossed one off the list. Marie’s mother was in town for Thanksgiving, and we decided to go up to the mountains to get some fresh apples. More about that in the next chapter. I had picked out a barbecue place in Blue Ridge to try, knowing that we’d probably have to make an additional stop or two, as Marie’s mother, madly, does not like barbecue. We were on the way to the place I’d picked when we passed a sign for the Pink Pig in Cherry Log, which read something like “full service restaurant.” We decided to go there instead.

The Pink Pig is another old-timer of a place. The late Bud Holloway opened it in 1967, and passed it along to his granddaughter Samantha Callihan and her husband, Jacob, a few years ago. They’ve given this old building a really homey, silly feel, with all sorts of nicknacks and crafts for sale in the front room. Many hikers begin their sorties through the southern Appalachians from this area, and there are also maps and guidebooks to the Benton MacKaye Trail on display. 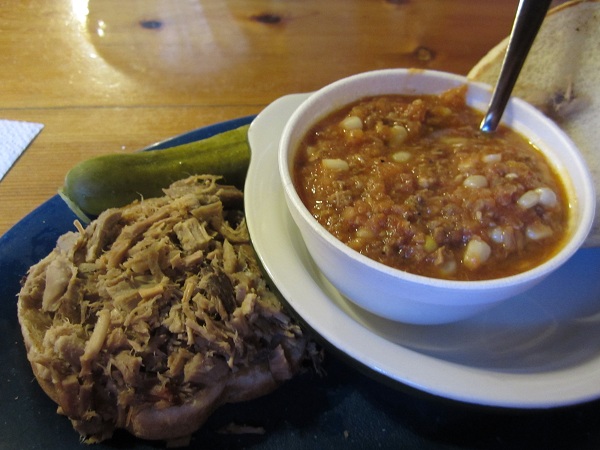 I confess that I was a little surprised by the prices here, which are more in line with restaurants in Atlanta than in rural Georgia. $10.25 for a pork plate with two sides is the most I’ve seen outside the metro area, anyway. Since I was not certain whether we’d be eating again at our next stop, I decided on just a sandwich and a side of Brunswick stew, and then, on a whim, decided to try their “world famous” garlic salad. Blast. Here’s a terrific idea that just gets clobbered by the execution. The salad is nothing more than the most ordinary mix of iceberg lettuce and a few slivers of radishes and carrots, clearly not prepared inhouse. But it’s drowned in an absolutely wonderful homemade garlic dressing. It certainly deserves to be poured over fresher greens than these, and probably with tomatoes and avocado. Heck, we should have got a jar of this to bring home with us. Maybe we’ll come back for one in the late spring of next year, once we can get fresh veggies from the Marietta Square Farmer’s Market again.

My daughter had an order of potato skins, and Marie had a stuffed baked potato. Her mother had a cured ham sandwich and everybody enjoyed their food a good deal. I thought my sandwich and stew were also just fine. The meat is smoked over apple wood, and is fairly dry. There are two sauces available on the table and they were both quite interesting. The vinegar sauce was quite curious. It was thicker and saltier than I was expecting. The sweet sauce was really good, and this truly was a surprise, as I typically prefer other styles of sauce before sweet. But this was not goopy or syrupy like too many people make their Kansas City-styled sauce; it just mixed perfectly with the meat. Both of the staffers we spoke with were wonderfully fun, upbeat and enthusiastic. These are certainly good people.

Of course, the best-known barbecue joint in the area is Poole’s, a few miles south in East Ellijay, which we wrote about a couple of years ago. Interestingly, Buster Evans – linked below – points out that while Poole’s is where Republicans in the region congregate, Pink Pig advertises the endorsements they’ve received from Ludlow Porch, Jimmy Carter, and, before he lost his marbles, Zell Miller. We stopped back by Poole’s a few hours later for a snack, and he’s still got his loud and boisterous endorsements of Newt Gingrich, Guy Millner and Pat Buchanan on the walls for everybody to see.

I’ve stepped on a couple of thin-skinned readers’ feet in a couple of previous entries by introducing a political edge to chapters here, as though politics didn’t drive practically every decision that we make every single day anyway. It is always a pleasure to visit Poole’s, even though I will almost certainly never vote for the same candidates that Col. Poole will, because whatever it is that drives him, be it his deeply-held faith, or his politics, or his love of good cooking, the man has an enthusiasm and love for life that is completely contagious and fun. The staff isn’t letting politics get in the way of simply having a great day and making every guest feel welcome, and feeding them delicious food.

I like being around people who love life, who love their country, and who love their neighbors. Seem to be plenty in abundance at both of these restaurants in Gilmer County, regardless who the owners support in the polls. Food’s good, too.

Other blog posts about Pink Pig: