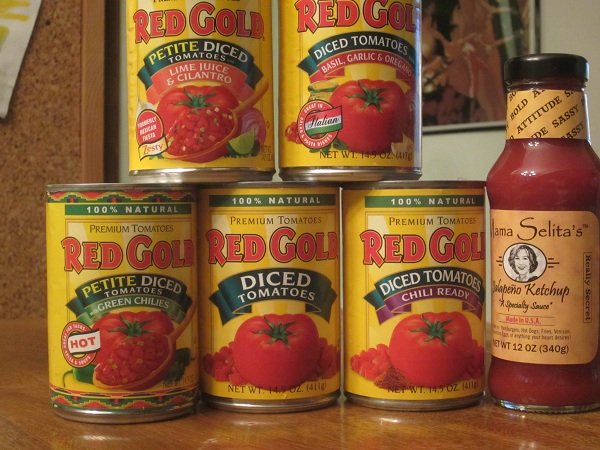 This is Marie, contributing an article about the Red Gold Tomato summer promotion, specifically their burger ideas. I have to admit that it wouldn’t have occurred to me to put a can of tomatoes into burger mix, so it was interesting to try out their suggestions. We had the opportunity to try five of their tomato varieties, along with recipes for five different ways to use them in burgers for the grill, and with some spicy ketchup to slather over whichever of them we tried. Look at this stack of interesting varieties. You might be able to get some yourself.

I started out with the very simplest possible recipe. It really is just meat, a can of well-drained tomatoes (in this case, Petite Diced Tomatoes with Green Chilies) and salt and pepper to taste. I am allergic to following any recipe too closely and used 1.5 pounds of meat instead of one, because I was not sure the patties would hold together otherwise. They were in fact quite tender, and I recommend greasing your grill a bit if you can, to prevent them from sticking. They would have had much prettier grill lines otherwise. However, they turned out quite well. I was just a smidge late getting them off the heat and they passed from medium well to well done on the plate going into the house. I know this, because one fell in half on the grill. Ah well. The burgers were still juicy and flavorful, so the tomatoes were a win. If I weren’t too chicken to try putting cheese into such soft burgers I’d have tried their suggestion of putting a slice of pepper jack in the middle. 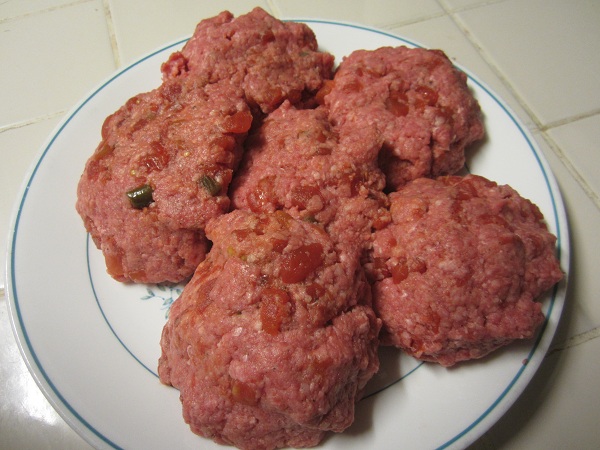 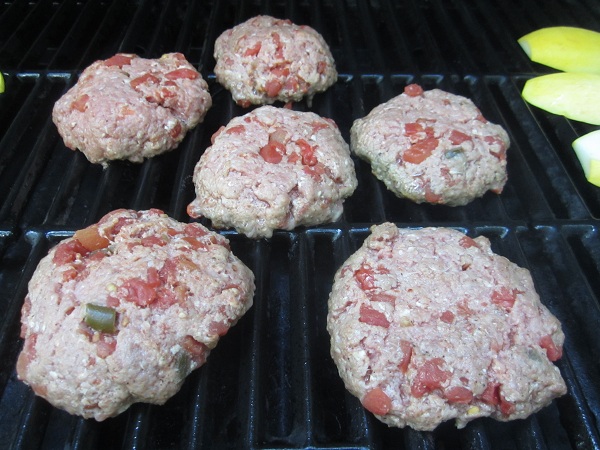 Here is the recipe we tried:

Combine beef & tomatoes (drained well – I let it sit in the sink in a steel colander for a while). Form into patties. Season. Add cheese to center of each patty for an added kick. Grill.

As desired, serve on toasted bun. use Jalapeño Ketchup or Chipotle Mayo. Layer spicy peppers. (I used toasted bread, mostly because I was too lazy to defrost my buns, but also for the juiciness factor) 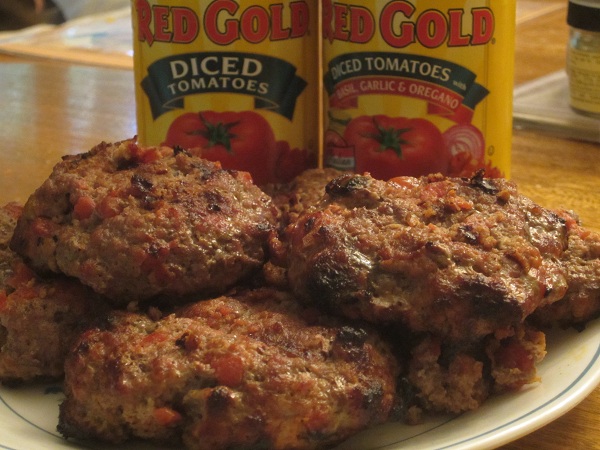 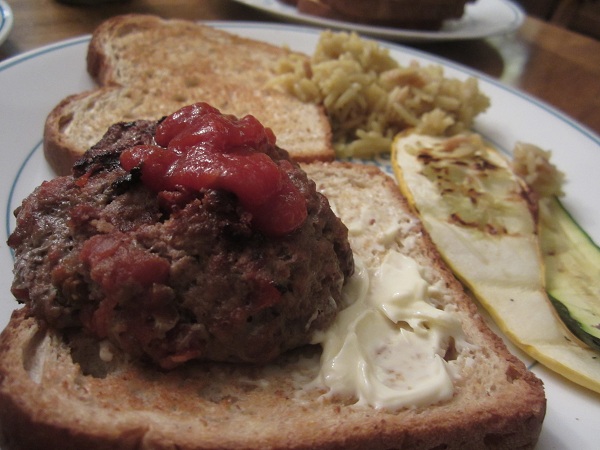 In addition, here is a message from the Red Gold folks, and based on our experiences you may want to check this out. They are offering prizes. The promotion has already started and ends August 30th.
The Red Gold Summertime Grillin’ Party is now live on their Facebook page. To enter: click on the Grillin’ Party image that’s posted on their Facebook header. The direct link is: https://www.facebook.com/RedGold/app_349542138512669

As an aside, I got a really good recipe for potato chili off the can of the Chili Ready diced tomatoes. I can recommend it. So although this promotion is mainly for the burgers, with a second chapter coming up in one week to tell you about another recipe that we tried, you might also want to go get a can of Chili Ready and try it out when the weather gets a bit cooler.

If what we made looked good to you, you can get a trial pack yourself by entering the promotion below! The Red Gold company will give a small prize pack to one of our readers, with two cans of their Diced Tomatoes and a bottle of Mama Selita’s Jalapeno Ketchup (which Grant also used with hot dogs earlier this month and pronounced quite good). There will also be recipes and coupons in the package. If you’d like to try to win the Red Gold prize pack, here’s what you do:

(This post was sponsored by Red Gold, who provided the canned tomatoes and the ketchup in return for our consideration in writing a post about our experience. It’s our policy to always note when we’ve received food without charge. If you would like to invite us to sample your company’s products, please drop Grant a line at gmslegion@gmail.com .)

One thought on “Cooking with Red Gold, part one – Spicy Burger”