Shaun Doty and Lance Gummere’s latest chicken restaurant, Chick-a-Biddy, opened earlier this summer in the Atlantic Station development. I confess that I was in no particular rush to visit this place, but purely from a blogger standpoint, and not from an eater’s. Earlier this year, I stopped by its sister restaurant, the equally bizarrely-named Bantam & Biddy. I didn’t particularly enjoy that meal, but that’s entirely my fault. I’ve never liked poutine and wondered whether some celebrated Atlanta chefs could change my mind. They couldn’t; enough said.

But when I’m considering new places for us to visit, over time one of the main considerations for us, locally, has been stories not really told. Now, later this week we’ll have a story which will make a mockery of that position, but Doty and Gummere have had all the hobbyist and media press that anybody could ask for, and there are still barbecue joints around town about which nobody’s ever written. Respectfully, Doty and Gummere have press aplenty, and don’t need us.

But then Bella Vivere tweeted a picture of a chicken sandwich. They may not need us, but I needed that sandwich. 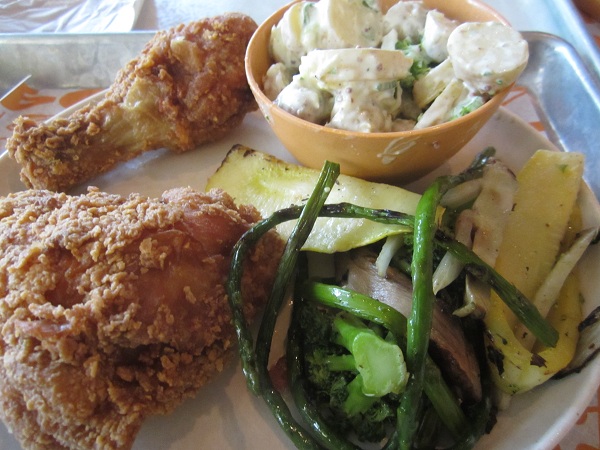 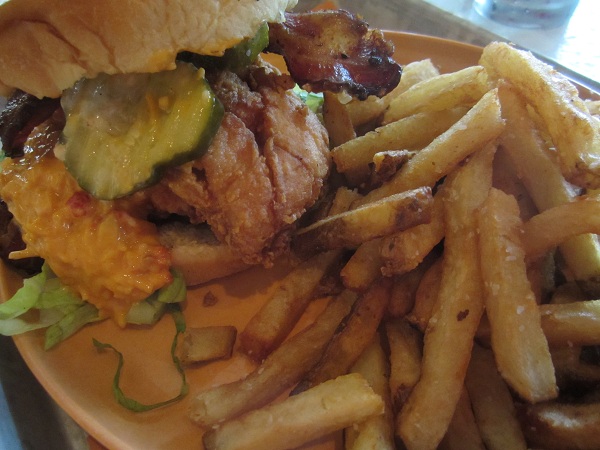 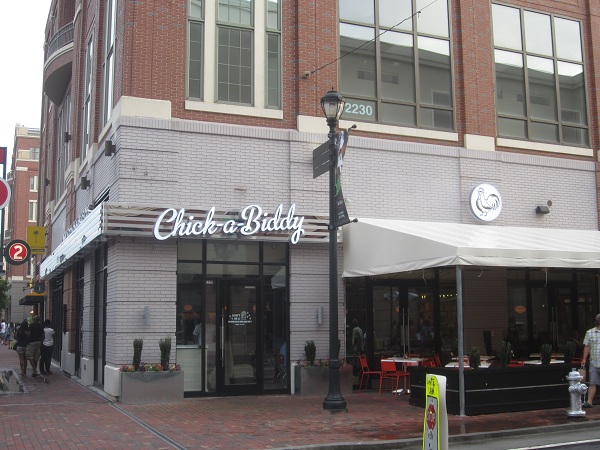 Blame lighting or blame your usual inept photographer, but that absolutely horrible and unappetizing shot up there is of a completely delicious and juicy fried chicken patty with house-cured bacon and pimento cheese, and it exceeded all of my expectations. Sure, plenty of people are talking about Chick-a-Biddy, and you’ll be able to read about them on a dozen blogs before the summer ends. That sandwich is worth the hype.

They are also doing Nashville-styled hot fried chicken. I was very, very tempted, but I came for the sandwich and wouldn’t be moved. I suggested to Marie that she have the hot chicken instead so that I could have a bite. She’s done her research and she’s had hot chicken, and now she need never have it again. She had normally-spiced chicken and said that it was very good. We’d be happy to visit again and try a few other things.

We’ll eat outside if we do, however. This music in this place was turned up to eleven, just obnoxiously loud, and very off-putting to a lovin’ couple out on a date night. We had to shout to make ourselves heard over the blistering, ear-splitting sounds of Steely Dan and Blue Oyster Cult. Turn the music down, guys. We’re not too old, but that is definitely too loud. 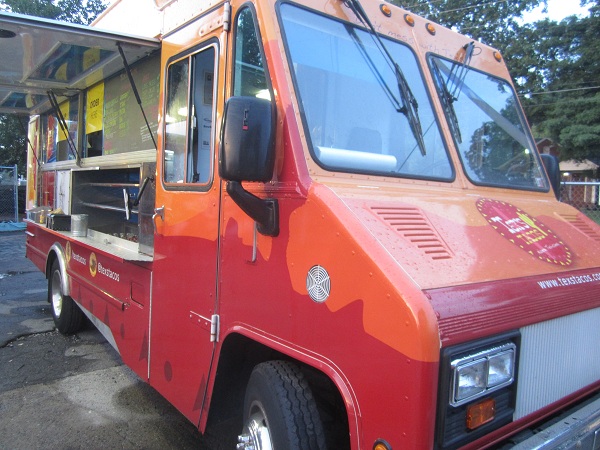 Marie and I had another hour and a half before we were due to pick up the children, so after a little shopping in Atlantic Station, we popped by the Atlanta Food Truck Park to see about some dessert. The vendors seemed to be disappointed by the turnout on this Saturday evening. There had been rain earlier in the late afternoon that apparently kept people home. When we had come by one Saturday in June, the place was so packed that many people had turned away, unable to find a parking place. This was a little less harried and ridiculous, and we could actually sit down to eat.

She got a cupcake from Yum Yum, but I was happy to finally be in the same place as Tex’s Tacos and helped myself to one of their little creations. I picked the Pastor de Puerco Taco, made with pineapple chunks and orange juice, and it was really something great.

Tex’s, which launched in 2011, has had a terrific year. They were voted the best truck at the 2013 Atlanta Street Food Festival, and with unique and flavorful creations like this, it’s easy to see why. We’ll probably do a family lunch at the Food Truck Park one Saturday down the line once it gets a little cooler. If Roux’d and the Blaxican and Tex’s are all here at the same time, I’ll probably spend far too much money at one time. Surely you don’t expect me to choose between them!

Other blog posts about Chick-a-Biddy:

One thought on “Chick-a-Biddy, Atlanta GA”