I had only tried poutine once before I sat down to a bowl of it for breakfast a few weeks ago at Bantam & Biddy. That was at a McDonald’s at a service island somewhere near London, Ontario, and I had a few bites and threw the rest out. But I’m not a fool; I figured that if I were to have ordered poutine at some little place with a line out the door in Montreal, I’d have been assured a better dish. What I had here was certainly bottom-rung stuff. I don’t recall whether it was actually and honestly listed on the menu as “McPoutine,” or whether I have just decided to call it that to emphasize the awfulness of what I ate, and to pass the blame and the judgement not on the dish, but on McDonald’s, who can make anything bad.

There’s a great deal of regional pride over poutine, much in the same way that some Georgians feel quite strongly that nobody but us can or should cook proper grits or Brunswick stew. Yes, some Quebecois get awful picky about their ski resort junk food, as though fries, cheese curds and gravy are things that can only be done well up that direction. There are certainly people who would be every bit as skeptical about the idea of good poutine being available in Georgia as some of us would be to think about edible grits in Montreal. 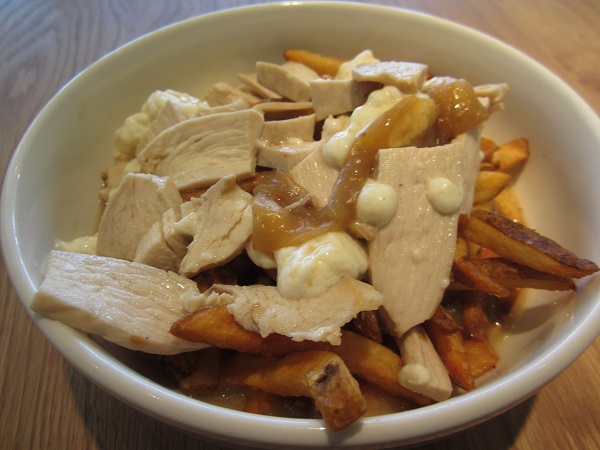 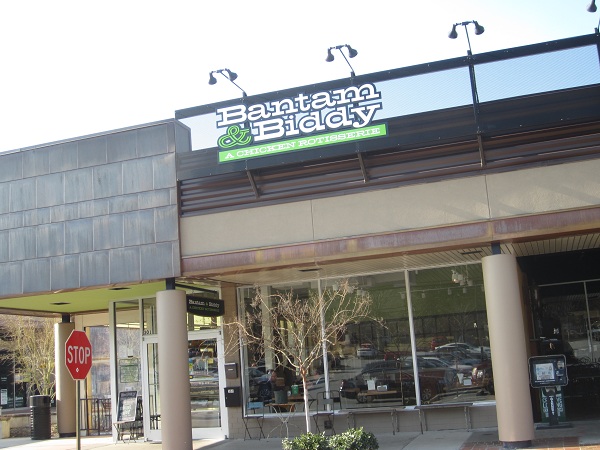 Honestly, I think that if anybody on this part of the continent’s going to cook up a bowl of poutine that’s going to impress me, it’s going to be somebody like Shaun Doty or Lance Gummere, lately of Yeah! Burger (Shaun) and The Shed at Glenwood (Lance). They’ve teamed up for a little “fast casual” chicken place called, strangely, Bantam & Biddy in Ansley Mall. I haven’t gone by for a lunch visit or to really consider the place on its own merits, or think about what it does best yet. I’m very curious to actually try their fried chicken sandwich, and hope to at some point soon. Perhaps if I do, I’ll actually write something that’s sort of like a restaurant review. What I’m doing today is telling you about my experience with the poutine.

Turns out I don’t like wet French fries. Go figure.

I find the experience of eating poutine similar to the experience of eating Maryland-style “Boardwalk” fries, which are completely drowned in vinegar and leave a limp and soggy potato behind. The first few bites of this dish, particularly the chicken, were really good. The fries, cooked in duck fat, were tasty and flavorful, and I liked the cheese curds. The deeper I dug into it, however, the more unhappy I became. Eventually, I dug out all the chicken and the cheese, and left the wet fries behind.

I’ll go back one day for lunch. The ATL Food Snob (linked below) snapped a photo of a sandwich that I would really like to try. I think, however, that, unless the road takes me straight to the door of Montreal’s La Banquise one night down the line, I’m probably done with poutine.

Other blog posts about Bantam & Biddy: