A few years ago, Marie and I enjoyed a restaurant that was in one of the strangest locations anybody could think to set up one: inside an old roller skating rink. I was reminded of that when I pulled into what used to be a church on Scott Boulevard in Decatur. Most of the building is now a Montessori school, but the old rec room and kitchen has been refurbished into a no-frills Indian restaurant and banquet facility called Zyka, and it’s completely wonderful.

Zyka has been in this location for about a decade, and they do good business with engagement parties and other private events. If you Google for additional blog posts, like I did to select the links below, you will bring up quite a few YouTube videos of happy young couples having a family party. Honestly, you could do a whole lot worse than have these good people cater your special day, because this food is really terrific.

I ordered their signature dish, which is listed among the appetizers, Chicken 65. These are fire engine red boneless chunks of chicken that are marinated in garlic and ginger. They’re fried with curry, green chilies, and cilantro and served on a styrofoam plate with two sauces: a thin tamarind sauce* and a thicker white concoction. I didn’t think that the Chicken 65 needed either, but after I unwittingly started mixing them into one, I sopped up almost all of it with my naan. 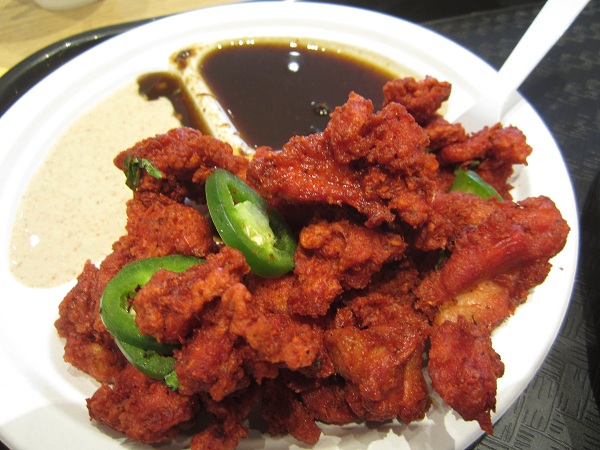 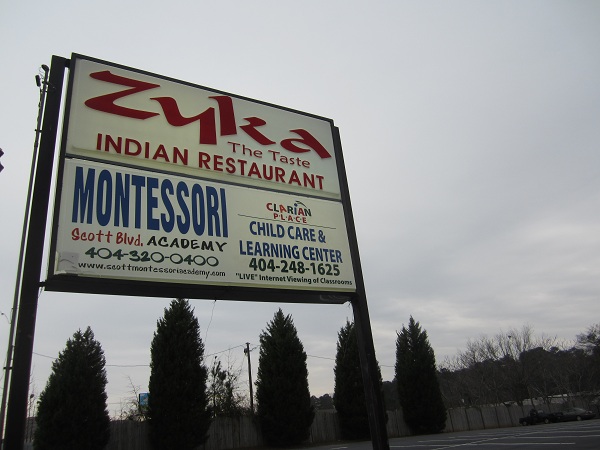 I was apparently a little more hungry than I thought, because the Chicken 65 didn’t really fill me. I decided to splurge and ordered Kadhai Chicken as well. This is boneless chicken served up in a bowl in a wonderfully tasty and spicy stew of tomatoes and coriander, garlic, ginger, masala powder and red chile peppers. I didn’t need the additional calories, but I really enjoyed both of the things that I selected. I’d recommend anybody going to visit each get their own meal from the “main courses” and split an order of the Chicken 65.

But I wasn’t quite done with Indian food that weekend. On Sunday, we all went to East Atlanta to visit our friends James and Victoria and their baby, who’s just a month or so older than our toddler. We decided to order delivery from a couple of places, and I was glad to give Niramish a try. This is the “other” Indian place in Little Five Points, around the corner and a little hop down Euclid from Planet Bombay.

They have dishes for every taste, but their list of vegetarian entrees is completely enormous, more than two dozen of them, so I decided to go with something from that page. I ordered the Chana Begoon, which is a dish that includes chickpeas served up in a thick, pasty brew made principally from pureed eggplant and tomatoes. Victoria recommended their garlic naan over the regular stuff, and I thought it was pretty good, but I’d have been just as happy with the regular stuff, I suppose.

*A reader informs me that they believe that the brown sauce was a tamarind sauce, and that my description of it as “not unlike soy sauce” was inaccurate. I appreciate the clarification, but yes, it tasted a bit like soy sauce to me.

Other blog posts about Zyka: